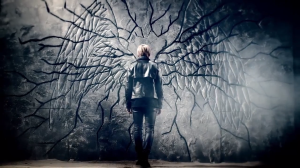 Six months have passed since B.A.P. dropped their last Korean release Badman with its eponymous single. While their seemingly back-to-back comebacks have slowed since the year of their debut, it still feels like ten years since their last release. Ideally, fans would like the sextet to have taken a break during this time. Unfortunately, the six months were not entirely relaxing as B.A.P. instead turned their attention to their Japanese debut, releasing Japanese versions of “Warrior” and “One Shot.”

After their successful debut in Japan, B.A.P. has returned to the K-pop scene with their first full-length album First Sensibility and the title track “1004 (Angel).” Building hype since the start of the new year with track lists and music video teasers, B.A.P. definitely returns with great fanfare.

While the teaser for “1004 (Angel)” hinted at a slower track akin to previous singles “Coffee Shop” and “Rain Sound,” the final release has proved once again how misleading teasers can be, especially in this industry. The single is no “Warrior,” but it is not really a ballad either. It falls right in the middle, which is typically a great spot for K-pop artists influenced by hip-hop.

With its guitar-driven Americana sound, “1004 (Angel)” is so, so close to being a rock song a la “One Shot,” but it lacks one key element: sufficient drums. And it’s a shame because it’s a great song. With tragic lyrics about a guy who feels like he can’t go on because the girl he loves is gone, the track has such power in the vocals, but without enough percussion, the interjected raps feel weaker than they actually are. Nevertheless, with just a couple of listens, it’s relatively easy to gloss over that, especially with such a well-matching music video.

As per usual with B.A.P., we get a powerful video with strong visuals. Approaching such a melancholy-themed song, B.A.P. does well to use a plethora of symbols in representation of that insurmountable grief. There are tendrils of plotline hinted at throughout, but the music video remains mostly symbolic. Following the precedent of most K-pop music videos with love interests, all of the members share the same girl. Normally, it would be easy to complain about this or the lack of a unified story, but it’s fairly successful here because it’s not really disjointed or confusing with each member portraying the same role with different variations on a common theme: the desperation of trying to move on.

Jongup‘s scenes are definitely the most literal as he grieves over a cracked stone carving of angel wings. He pounds the rock over and over until he manages to break through it. He looks through the small hole he’s managed to make and sees the girl he loves through it, but he can’t reach her. So he keeps taking his fists to the wall until he breaks it large enough to reach into the proverbial light. But he soon stops as though seeing her has given him a sense of closure despite the pain.

Zelo comes to a similar conclusion as well. Since he is the maknae, it’s fitting that his scene would imply a more childlike, carefree kind of love. He goes to an abandoned carousel that we find out is tied to a memory. He tries to turn the carousel on but fails. Downtrodden, he walks around it, imagining that he sees the girl but never getting to her. Eventually, he sits down and gives up his search, okay with just his memories to sustain him.

Youngjae doesn’t take it as well. He wanders through a room of mirrors, giving chase when he sees the girl. It seems like he can never catch her, and just when it seems like he has found her, he realizes that staring at his own reflection. He has to face the fact that he is actually alone, but he doesn’t want to. In anger, he punches the mirror and sinks to the floor, crying.

Most symbolic would definitely be Yongguk. He opens the music video and runs without abandon through wilderness. Over strains of “Save Me,” another track off their album, he wanders between bare dinosaur bones — perhaps symbolic of the emptiness in his heart — appearing simultaneously as though he is lost and in search of something. The tone for his scenes are very bleak, paralleling the feeling of losing a loved one. After meandering aimlessly for a bit, Yongguk begins to dig and gets frustrated many times in his search. Eventually though, he finds what he was looking for, a silver memento that appears to be a cathedral, and clutches it to his chest. He now clings to a specific memory to fill his life. 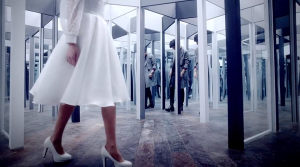 Similarly, Daehyun lives in the past. In an old room, he reaches for different objects that clearly remind him of the past, all of which seem to correspond with the other members as well, and he is definitely determined to remain firmly in the past. He keeps going for item after item, roaming and remembering, as though time has stood still. His role eventually changes when at the end he finally flips the hourglass. He is able to sit back, stop living in the past and let time move forward, even if it does hurt him to do so.

While Daehyun and Himchan overlap somewhat as they occupy the same room, they have different roles, presenting a sort of dichotomy. Daehyun moves on, but Himchan takes things differently. He relives his memories of the girl in watching a film reel of the happiness of his past. At first, he smiles. This is a pleasant reminder of what once was, but his expression changes. He soon gives way to angry tears and searches through a nearby desk for a gun. He points it at the projection of his former happy self, but he then turns and points it at a mirror. The reflection though shows that he’s actually pointing it at himself, which was enough for us to get it. Showing the actual suicide was really unnecessary. But it also isn’t exactly unexpected since this is B.A.P., and they have made their career on being heavy-handed and in your face. 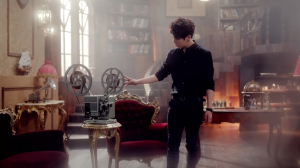 Where I wish they had been heavy-handed is in showing us the choreography. We get cuts of it here and there. There’s a sort of crawling move and some intense pelvic thrusting, but the jumps between scenes are so short and quick that we don’t see much else. I can’t really say much more other than it being powerful, but that’s pretty much the standard for B.A.P.

The only part we get a really good look at is toward the beginning when the song really kicks into gear. There’s a great paired dance between Zelo and Jongup, which is without a doubt my favorite scene in the music video. The two may do the same moves, but they clearly have their own styles. That contrast works because they play off each other in the choreography.

Working in harmony with the symbolism, the cinematography is pretty consistent in matching the tone of the song and scene. The wide, desaturated shots of Yongguk in particular are especially strong. They make him seem so small and alone. And the cool colored palette of Youngjae, Jongup and even Zelo’s scenes definitely play off that melancholy atmosphere as well. It’s a bit strange that Daehyun and Himchan are filmed with warmer colors, which typically are used for happiness. Overall, though, the filming is lovely and works well with the rest of the music video.

It’s that rich imagery that makes this music video so compelling. While neither the track nor the choreography is weak, the visuals are really at the center stage. The symbolism — while obviously heavy-handed — is a B.A.P.-style reflection of how people grieve. With so much to see, it also invites us to watch it several times, to catch details and to see connections. Coupled with the cinematography, it definitely more than compensates for what might be lacking elsewhere. All I need now is a dance version.