I would like to begin with an apology for the lateness of this piece. Though I dedicated myself to covering these awards, braving boredom through three hours or so of award show pabulum via a tempermental livestream, I eventually succumbed to the dreary atmosphere. There was also one other thing that happened just before the conclusion of the show that put me into a deeper funk, but that is a topic for another day.

Award shows should be exciting events, but they are in reality dead boring. And I’m not even talking about the hosts and presenters; considering I don’t understand Korean, I have no idea if they’re doing a good job or not, and nor do I actually care. I’m mainly here for the performances, but they have been a let-down as of late.

Not that everything was terrible, for there were a few highlights:

This performance looked and sounded so pretty and refined, with even the switch in the instrumentation from the mandolin to the more conventional synths working well. It was definitely a performance befitting this kind of occasion. The only gripe I have is that, though her mic was on, Ye-rim wasn’t actually singing: perhaps she didn’t want to risk it with all the movement that was required of her for this stage, but it’s a shame people missed out on hearing her voice; “All Right” sounds divine live.

No way you’re playing live, boys, but that rendition of “What’s Happening?” at the start is to die for: the mood of the whole song is changed in the best way possible. B1A4 soon slip back into the song’s original sound, but I don’t mind since it’s a fun song that provided the mood inside the venue wit ha much needed lifet — and the boys sound great live. I would really like to hear (and see, especially see) more of this sexy B1A4, though (pretty please!)

I… don’t quite know why I included this performance, seeing as it is rather lacklustre — I mean, I had fun, but that could have just been the sugar rush I got from all the musk sticks I’d eaten to keep myself awake. But then I see the riot of bright colours all over this stage, think back to the monochromatic outfits most other idols wore (if they weren’t wearing red), and I remember why. That is how starved for colour I am, K-pop, please bring it back to the award shows!

Infinite gave one of the evening’s most solid performances, but the highlight was undoubtedly the intro performed by Infinite H members Hoya and Dongwoo. Even if it is the weakest track from their debut EP Fly High, “Victorious Way” is the perfect opener; I really cannot wait for Infinite H to come back (and they better come back, Woollim/SM). The main group, meanwhile really brought the intensity to the stage; that “Man In Love” was avoided completely only makes me like this stage even more.

This was hands down the best performance of the night: the vocals were stellar, the swing-era touches with the trombone player-cum-dancers were unique and adorable and K.Will was able to command the audience in a way that no one else was quite able to (even fangirl favourites Exo or Performance award winner Lee Seung-chul). The performance built beautifully to its end where K.Will was raised on the dais and confetti rained from the sky. It was absolutely gorgeus to watch and the most lively, happy and inclusive stage by far. This is what award show performances should be all about. 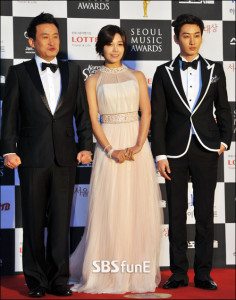 This year’s show was broadcast on KBS and hosted by MC Seo Kyung-suk, A Pink‘s Eunji and Super Junior‘s Eunhyuk. Exo added one more to its rapidly growing daesang collection and picked up another two awards; Shinee also won three awards, with B1A4 and Cho Yong-pil not far behind with two trophies apiece. A full list of attendees-cum-winners can be seen below.

Record of the Year (Digital)
EXO 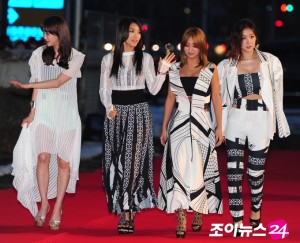 OST Award
The One (for That Winter, The Wind Blows) 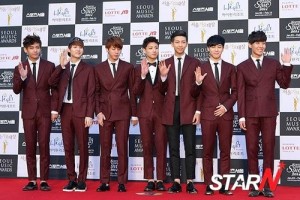