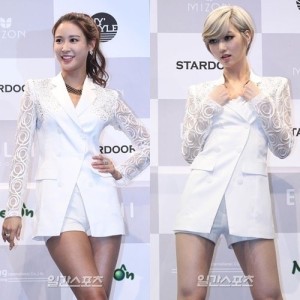 There’s been some pretty crazy news revealed today, but the saddest would have to be that two of the original members of Nine Muses, Park Eunji and Lee Sem (also called Sam), would be departing from the group.

In a statement released today, agency Star Empire relayed that this was the two members’ own decision that the company had decided to respect, and also that Eunji and Lee Sem will be preparing to embark on solo activities. Both will be remaining under Star Empire.

Line-up changes aren’t new to Nine Muses; though debuting as nine in 2010, they lost three members within a year. But during that time  they also gained Moon Hyuna, and after adding Kyungri and Sungah were able to literally live up to their name again — until now.

So even though the group has dropped members in the past, Nine Muses’ rising popularity means that Star Empire has to tread more carefully with how they go about these matters now. Rebranding the departure as a “graduation” appears to be a decision made with that thought in mind, but only time will tell how this move — and Hyuna and Sam’s solo activities under Star Empire — pans out.

Readers, how do you think this change will affect Nine Muses? If Star Empire stick to this new “graduation” concept, then new members are likely to be added — what are your thoughts on that happening? In the meantime, here is Nine Muses last single in their current configuration: “Glue.”