Dal Shabet Shows that Less is More with "B.B.B"

Dal Shabet, the six-membered girl group from Happy Face Entertainment, received a lot of attention for their last song “Be Ambitious (Look at My Legs):” though perhaps not for the right reasons. Mens rights activists (yes, they exist) went as far as to file an injunction, arguing that the song’s suggestive lyrics could incite sexual assault and the army training cuts disrespectful to soldiers enlisted in the army. After the hullabalooo, it could make sense why Dal Shabet went for a more minimalistic approach this time around.

The three Bs of Dal Shabet’s title track stand for “Big Baby Baby,” a phrase used by the girls to taunt their lover. According to the lyrics, Dal Shabet isn’t very happy with the way their lover behaves towards them and asks them to return to their previous, more affectionate, ways. Even without understanding the Korean lyrics (or not looking them up beforehad) the MV conveys this sentiment through the English lines in the song and phrases superimposed on the screen: “Attract;” “Sense of loneliness;” “Wanna get your body tonight;” “Someone stop those lights flashing so fast they’re giving me a headache” (or maybe that was just me?) 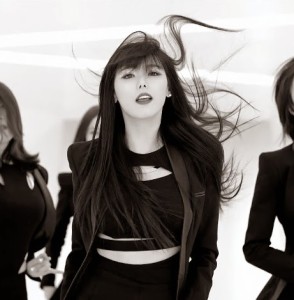 This “Big Baby” guy is lucky that Dal Shabet is giving them a second chance, because they could have almost anyone they wanted looking the way they do in this MV. There’s a lot to be said for simplicity, as the girls look fantasitic in their minimalistic black and white outfits. Serri is a stand-out with her black hair and red lips, though everyone looks good: even the jewelled eyebrows were kind of interesting. And this is a very good thing, for there isn’t much going on in this music video: it is quite the turnaround from “Be Ambitious.”

We have two dance scenes styled in black and white, with the various shots staged like a photoshoot providing necessary pops of colour.There are also a couple of camera pans involving the girls reposing within their own boxes that are also quite cool to watch. Some wigs that wouldn’t look out of place in an Orange Caramel video appear on the members’ heads at some point, the flickering of lights can get to be too much and the dance is nothing spectacular (the hook move employed here reminds me of something that is perhaps too gross to be stated on this site) but the MV is mostly a sleek and minimalist product; and it’s good, but not especially memorable (except for Serri’s face, that’s a pretty memorable face).

What is memorable, though, is the song. It contains two good things from the ’80s: Eurythmics and Salt ‘n Pepa. The instrumental is similar to that of “Sweet Dreams,” while the “Big baby baby” hook is a slightly altered version of the same from “Push It.” I’m not sure if Dal Shabet can get away with something like this; but for what it’s worth, at least it’s not a straight-up rip-off and shows some creativity. While the “Big baby baby” hook was perhaps repeated too often, the other synths and beat added to the song only add to it, and the visuals of the MV fit the ’80s vibe as well.

All in all, this is a pretty decent effort from Dal Shabet and Happy Face Entertainment. It’s their most mature release to date (I found “Hit U” to be too overdramatic for my taste), with a simple look that is much welcome in the K-pop scene.

By showing us that less can indeed be more, Dal Shabet earns a 3.1/5 for their latest  MV.