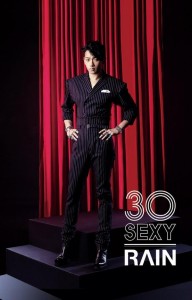 After almost four years since his last album, Back to Basic, Rain has returned with his sixth album, Rain Effect. Under a new entertainment company, Cube Entertainment, we see Rain have a more hands on approach as he is said to have been involved in the creation of the album – from choosing the songs, contributing to lyrics of every song and the styling of the two title tracks, “30 Sexy” and “La Song.”

The quintessential intro song does everything it should do. “Rain Effect” opens the album with the declaration of ‘future connection’ as we hear the sounds of typing before the chorus of “30 Sexy” is played and the riffs of guitars can be heard. A brief pause and then we hear the beginnings of the first title track, “30 Sexy.”

The greatest thing about “30 Sexy” is the great melody that hooks the listener in even before the verses actually begin. The beat when coupled with Rain’s falsetto makes for a perfect combination. It’s easy to see why this song gave Rain his first number one trophy for this round of promotions. It fits the very definition of a club-banger – addictive hooks, a danceable hook and the feeling that losing control would be the best thing to do.

Like the song, the MV is also very streamlined – clean lines, no messy camera angles. It is essentially a dance MV with a couple of costume changes and a few close-ups thrown in – nothing can go wrong with this kind of MV. Well, there is one thing and that is the dance. So it’s a good thing that Rain is working it in this MV. It’s not as aggressive dance-wise as previous hits but it still retains the sexiness Rain is known for having on stage.

Like everything else in this production, the dance has clean lines and transitions. The best thing is what I like to call the male version of Sistar’s “Alone” dance. You guys know it, it’s when Rain shows off his legs from the 0:20 mark onwards and is the dance during the chorus.

The only negatives are that black kiss mark because it looks so tacky and can someone get rid of the leopard print jacket and keep Rain in suits all the time please?

After is the second title track, “La Song.” Compared to “30 Sexy” which was very on trend with the use of electronic influences, “La Song” is more reminiscent of Rain’s previous hits. It sounds old school and we also have Rain rap between choruses. Compared to the previous song, this is less memorable in that there is nothing that remains stuck in the inner crevices of your head the same way as “30 Sexy” does.

Moving away from the discussion of racial representation, this MV is much busier than the “30 Sexy” MV, which is only fitting since the song is definitely busier then the ultra-slick “30 Sexy” with the opening moments of the song giving us some brass instruments, a couple of bars inspired by Latin music and then there’s that guitar somewhere in the song.

Thus, it is only fitting that this MV has more elements in it then “30 Sexy.” For one, there are extras and the set is in what seems to be a warehouse, or dare I say a black market? Doesn’t really matter because it then devolves into an impromptu street party where the different racial groups show off different dances that are identified as part of their culture.

The next track in the album is “Where are you going oppa?” which features Hyuna from 4Minute. It continues the beat we first hear from “La Song” and the contribution from Hyuna is her rapping. It isn’t the best track on the album and sounds more like a guilty pleasure track if anything. The moment it ends is the best thing about the track. There is some potential but before you could put your finger on what could make this track work, Hyuna starts going ‘oppa’ again and your mind just loses it. Or at least that was my experience with the song.

Thankfully, the next track is a step back in the right direction. “Marilyn Monroe” is the feel good song of the album and makes the record worth listening to again after the previous track. It is stripped back and we hear Rain’s voice without all the noise from the tracks before. He sounds good; the song is within his range and if there is one thing Rain can do, it is serenade. He may not have the most powerful voice in the industry, but this song shows that he knows how to work with what he has.

“Baby” continues the stripped back melody from “Marilyn Monroe.” From the very start, this became my favorite song from the album. Like “Marilyn Monroe,” Rain works with his vocal range and with the additional sounds of the background, almost as if there is water dripping down, almost makes a listener imagine what this song would be like when he performs it live. I wish this was the second title track instead of “La Song” because it reminds one of “Love Song” without it sounding the same.

We go back to the noisy production with “Superman.” While the song is also extremely danceable, like most Rain songs, there is something lacking. While Rain’s falsetto makes me go crazy, it is used in the wrong way in this track: it;s annoying to the ears when combined with all the noise. Filler song is filler song, it seems. But I would be extremely interested in an instrumental version of this song. Imagine walking out of a horrid class and listening to the instrumental of this song to perk up.

“Found Out” is the better attempt to mix old school elements with new sounds. By ‘old school elements,’ I mean the sound prominent during Rain’s hey day before his military service. There is nothing negative to say about the track. It checks the boxes of a good B-Side song. Of the numerous times he rapped in his songs, this is the better track from this album. The rap is short, succinct and doesn’t detract from the song.

“Dear Mama Don’t Cry” is the nearest thing to the essential ballad of every album. The chorus has Rain repeating the title again and again. The greatest element of the song is the addition of the sax, which adds to the ambience of the song, undoubtedly dedicated to his mother who died before Rain could make his debut. 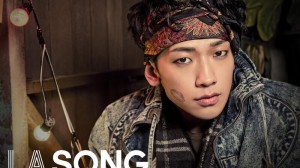 The album had an intro that sampled “30 Sexy” so I guess it only makes sense that it ends with the official remix of the song, “30 Sexy (East4A Deeptech Mix).” For those who find the repetitiveness of “30 Sexy” too straining to the ears, here’s a version that introduces several new elements to the melody, giving the song more ‘oomph’ in the process. While I still prefer the slick sounds of the original, this still lives up to it.

All in all, the album was a good listen. It showed that Rain knows his limits, he knows his range and what sounds good. It shows that he is updated with the trend in K-pop these days and is willing and able to change sounds as he wishes.

However, the album lacked a certain memorability that would make a casual listener come back for more. Additionally, there are no tracks that truly stand out and make waves like “Rainism,” “Hip Song,” “It’s Raining” and “Love Song” did. When one thinks of Rain, they immediately remember one of those songs; they were just perfect for him. Instead of the music, people seem to be talking about the “La Song” MV instead.

Overall, the album was disappointing with only a handful of songs that had the potential for more. 2.5/5