Ailee Commences the New Year with "Singing Got Better"

Starting off 2014 fresh, Ailee returned with the digital single “Singing Got Better.” The track was written and produced by Wheesung, much like Ailee’s debut song “Heaven.” The song promises to be a rock ballad, deviating from the high-powered hits the songstress has been known for since debut. The music video stars MBLAQ‘s Lee Joon as Ailee’s love interest and a heart breaker, if the teasers are anything to go by.

The storyline is clear and easy to understand: Ailee’s made it in the music industry, as evidenced by her security and overall celebrity look. Flashbacks show Lee Joon as Ailee’s boyfriend and fellow artist, working on compositions while she sings. They’re a happy pair, to the point where Ailee considers giving up her singer dreams to instead settle down as a wife, and it’s only when she catches him cheating that everything goes downhill emotionally but straight up career-wise, prompting chorus lyrics like, “My singing got better after breaking up with you.” The separation provided enough fuel and experience to relate to her lyrics and sing wholeheartedly, ultimately leading to success. The trip to the top took some anguish, and the ending scenes show that some of that still lingers. One of the more stirring takeaways is that her success wouldn’t have been possible if she had fully put aside her dreams for the man that deceived her. 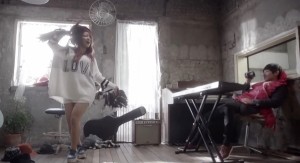 The lighting is dull and tinged with gray throughout the music video to help solidify the impression that none of the emotions are happy in the present, continuing its usage throughout the music video to maintain the sentiments of the song. The music video moves at a good pace, capturing facial expressions at the right moments, whether it’s Lee Joon shrinking into himself after getting caught or the movements when they argue. And it’s a good thing that the pace moved quickly through that argument as dawdling could have made the scene seem overdone, especially with Ailee’s numerous head shakes.

The best moments of the video are the happier ones. Starting off the music video with the fun recording taken during the MV was an endearing touch, serving not only as an adorable start but also as a contrast to the much more serious scene that follows. The scenes as a happy couple are casual and simple, and in turn, make it easy to watch.

The music video follows the lyrics clearly and presents a complete tale for the viewer. The editing times solo shots and plot at good moments, aiding in the pacing. The music video has good points, but it’s bland and leaves no impression, allowing it a score of no more than 3.5/5.

And that’s okay because the real star of the music video is the actual song itself. Ailee’s made a name for herself with her powerful voice for her previous tracks, capitalizing on its strength for a charismatic performance, especially for “I’ll Show You” and “U & I.” But in “Singing Got Better,” we get less ‘Beyoncé’ and more Ailee showing off what else her voice can do. 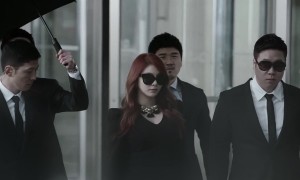 That’s not to say the song is devoid of her robust sound; quite the contrary, it shows up during the chorus and more so during the climax. Rather than starting off strong and keeping it throughout for a energetic dance performance, the song showcases more melodious notes. However, there is a large and rapid build-up to the chorus, which can be overwhelming and sudden. It gives the impression that there’s no middle ground between the softer starts and the vigor of the chorus, perhaps due to the instrumental’s similar build-up working as opposition rather than support or harmony.

Nonetheless, the shift this promoted track brings to Ailee’s repertoire is crucial to developing an individual style and identity. In the long run, it’s better to display versatility than being static under the label of another, no matter how outstanding the other artist is.

How do you think Ailee did for her first track of 2014? What are your thoughts on the music video and/or the song?