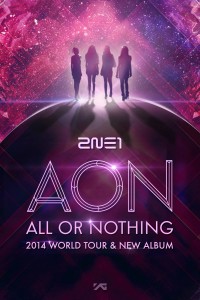 In the past 24 hours, it has been revealed that 2NE1 will be releasing a new album and then starting their second world tour. As of now, we don’t have any dates or locations for the tour, but we do have the first official poster as well as an album name, AON (All or Nothing). This has been a long time coming for Blackjacks who have waited patiently (or maybe not so patiently) for the follow up to their first full-length studio album, To Anyone, which was released in 2010.

As for the tour, if there’s one thing guaranteed with 2NE1, we will be a) getting our money’s worth and b) the girls will put on a show. In fact, their performance in New Jersey was hailed by The New York Times as one of the “Best Concerts of 2012,” a list that included concert performances from Jay-Z, The Rolling Stones, Mary J. Blige and Radiohead.

But that wasn’t the only announcement from YG Entertainment. It has also been announced that YG artists 2NE1, Big Bang and Psy would be part of a hologram theater, Klive – a result of YG teaming up with KT.

Apart from a hologram concert, there will be other attractions, which include the ‘Special Window’ where visitors can view special unreleased photos,  ‘AR Elevator’ where passengers can feel as if they are in a limited space with a celebrity, and the ‘Star Photo Box’ where one can take a photo as if posing with their favorite celebrity.

Right now, all we have from YG is a title for the album. Stay tuned to Seoulbeats for further updates aka please YG, give us something good.