T-ara Returns to Disco with "Do You Know Me?" 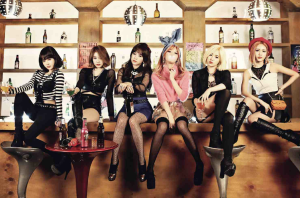 Regardless of how one feels about T-ara and their past scandals, no one can deny that they haven’t let it get to them when it comes to the stage. Despite their label Core Contents Media‘s interesting, to say the least, way of handling them, the group is making headway and improving as a group. While their success has been up and down — sub-unit T-ara N4 had their lackluster single “Jeon Won Diary” — their latest single “Number 9” showed maturity while still sticking to their strength of catchy electro-pop dance numbers.

With their repackaged album Again 1977, T-ara has returned to their disco days with promotional single “Do You Know Me?” or “What Do I Do?” in Korean. Obviously trying to echo their success with their 2011 retro hit “Roly-Poly,” T-ara is going for a new twist on the genre. While “Roly-Poly” was more funk-influenced, “Do You Know Me?” leans more heavily on the electro-pop that they do so well with its pounding bass and repetitive auto-tuned vocals. And that could easily be a flaw or boring or just the same-old-same-old, but the thing about T-ara is this is what they do best. And “Do You Know Me?” may not be perfect (it took a couple of listens for me to really get into it), but it works. Why fix something that works?

The best part about “Do You Know Me?” is the balance of the music and the vocals. “Jeon Won Diary,” despite using their typical sound, went overboard and was less about the sub-unit and more about producer Duble Sidekick. However, “Do You Know Me?” has great music breaks that go with the typical pattern of disco music — The Ritchie Family‘s 1976 song “Arabian Nights” was 14 minutes long with half of it being music breaks — but they never feel dominant. And the vocals may be repetitive, but I can’t deny that I was singing “우리 어디서 봤더라?” for days after I first heard it. What can I say? The song is catchy. Since it’s a remake of the 1977 hit of the same name by Sand Pebbles, they obviously had a good song to work with already, but it was the music video that made it their own.

From the start of the music video, the set reminds me of Girls’ Generation’s “I Got a Boy” just with less neon signs. Maybe it’s just me. Nevertheless, the set works. It has a strong music theater vibe, with its simple design, the members’ placement and particularly their use of spotlights at the beginning ballad section. In fact, everything about this music video is reminiscent of a musical, which makes sense since this is the theatrical version.

The difficulty with this music video is that it doesn’t really have a plot. On the one hand, the song is about a girl not remembering where she had seen a guy before and the precedent of most K-pop music videos so it seems logical for there to not really be a clear plot, but on the other hand, this is supposed to be a musical version so there should still be a clear plot. It’s a strange conundrum, and instead we get this in between thing that has strings of a storyline in there but little else.

What there is of a story starts after the ballad section, which is the other new song from the repackage “I Don’t Remember 1977 (1977 기억 안나)” with little happening in the music video. Featuring a cameo appearance from actor Son Ho-joon of nostalgic drama Reply 1994 fame as a sort of male lead, the section of the music video that follows opens with him walking across the street of the set as the members of T-ara recognize him. Qri, though, doesn’t despite the fact that the others remember whatever connection there is between them and is shy when they push her toward him. Fortunately for her, Ho-joon doesn’t seem to remember her either so she finally asks him, “We met somewhere before, didn’t we?” Cue the start of the music and their shrugging dance move.

We then follow Jiyeon to a downstairs bar/club they run altogether. A great moment in this scene is them doing moves from previous singles “Bo Peep Bo Peep” and “Number 9” as they dance around and sing the first verses. It’s a cute throwback though it’s just for a short few seconds. 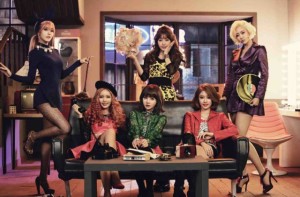 From there, whatever sense of story or cohesion is lost. The girls return to the outdoor set and do a pointing dance move opposite a group of guys doing the same. But they lose interest in the five members when they notice Soyeon on top of a fire escape/balcony. When she blows kisses to them, they then pass out.

There is then a cut to another scene in the set of some sort of dressing room. The girls lounge on couches, try on outfits and prep in front of Hollywood-style lit vanities. Qri seems to be still preoccupied with Ho-joon and actually on the phone with him as she sings, but it isn’t clear since we don’t actually see him again after that opening scene. Plus, while Qri was the established main character of that attempt at a plot, all of them sing the song.

After getting dressed, they head back to the bar this time for business hours. Even though we see Qri behind the bar, Jiyeon bringing drinks to customers, and Eunjung with a cocktail shaker, but they don’t really do anything else. Instead, it just seems like they party instead of actually working. Hyomin even dances on the bar. But I guess in light of the theatrical effect they were going for, the lack of actual work sort of makes sense.

The strength in this music video is the choreography. It’s clearer in the live performances just how well-choreographed the transitions in this song are. The members move in and out of the scene as they sing their parts, only coming together for the chorus, instead of the typical group choreography with individuals coming in and out to sing their parts. The moves themselves are also great because they’re simple but effective because of their accordance with typical disco moves like the box steps, drag steps and lots of extended arms. T-ara has never been a group known for complicated choreography so the easy-to-imitate steps paired with great transitions works well with the song.

While the choreography worked well, the styling was a bit of a mess. Qri had a beret, Eunjung was in a purple trenchcoat, Jiyeon wore lots black leather, and Hyomin had bunny ears headbands. I really can’t find any consistent theme in that, which was necessary for their theatrical concept. And while I loved Hyomin and Qri with their quirky pink-tinted hair, I found Eunjung’s hair off-putting. Setting aside the color, it just looked really fried and damaged, which doesn’t look good on anyone.

Musically, my favorite part of the entire music video is actually the opening ballad. The song is simple and beautiful with just strings and piano. While little happens in this section of the theatrical version, this song is actually the focus of the vintage music video released at the same time. Unfortunately, the music video isn’t much more than a bunch of “artsy” filters and video effects over footage of the members traveling. While it’s cool to see them in Beijing sightseeing — we get shots of the Forbidden City — this is interspersed with lame shots of them just sitting in hotel rooms singing. However, it is great to see them pay homage to Sand Pebbles at the onset of the video.

Altogether, while this comeback isn’t as strong as “Number 9,” the song is nevertheless catchy with spot-on choreography. Perhaps with T-ara back to their original line-up, the group can get back to the strength of their Absolute days when things were fuss-free. It’s hard to say where T-ara will go next (thanks for that, CCM), but I’m just hoping things continue to get better for them.