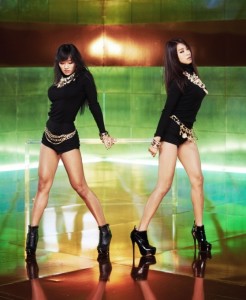 With December already here, it’s time to reflect on the year that was 2013.

Perhaps the one thing that separates K-pop from any other music industry is the frequency in which it asks its artists to perform live on promotional platforms that have come to be referred to as Music Shows. That’s why we survey the multitude of performances during each week and recap the best of the best in our Best of Weekly Music Shows segment. With so many great performances that took place during the year, it can certainly be tough to narrow down the list. What were some of your favorite music show performances from 2013?

Amy: Just for the newness factor, I did like the way Exo’s “Growl” stages were planned. They got stale after a while, but I did like the interplay between the members and the cameras — the actual awareness of the cameras as a prop to be used within the performance — though I don’t think any one station was ever very good with imitating the one-take style, despite the many attempts. None of it seemed as organic as the actual music video, but props for trying?

Erika: I definitely became a huge fan of Exo because of their performances this year. After “Mama” and “History” (which I thought was promising because it hit so many 80s R&B notes so perfectly, I’d expect to hear it on the Coming to America soundtrack or something), I was intrigued but didn’t get the hubbub. And that it took forever for the follow-up to come meant my attention drifted elsewhere. But “Wolf” definitely reeled me back in. I love that the choreography for “Wolf” and “Growl” are truly art. The masterminds behind those two performances were weaving stories, expressing emotions and ideas, picking from multiple styles of dance. They weren’t just showing off pretty faces and sculpted arms. And because of the inventiveness of the artistry, “Wolf” and “Growl” really made their mark. Plus, Xiumin got a bit more play this time around and what a little gem he’s turned out to be!

It’s no secret that I’m a hardcore Starlight, so I really looked forward to VIXX‘s stages and enjoyed them all–probably “Hyde” most. For Exo and VIXX, I was really impressed with those who don’t come from a dance background, like Ken and Baekhyun, absolutely killing the moves. I loved that VIXX’s concepts were fully realized through dance and music.

Finally, I was super into BTOB‘s “Thriller.” I know it left as quickly as it came, but those were five more seconds of Minhyuk I got to see than before!

Mark: I know I’m gonna get flack for this, but I really like the Trouble Maker performance of “Now” from MAMA with the guns, kisses, and the whole sha-bang with Infinite. This is technically not fair since it’s from a year-end awards show, but I still want to give it an honorable mention because it really brought an extra kick to what is already a great routine.

Pat: Like Erika, I am yet another hardcore Starlight and I loved their main releases this year. It’s not often one gets such theatricality in K-pop. Not only do I love the theatricality in the choreography, but that each of their four main releases is all connected in one way or another. It tells a complete story and there are parts in each dance that recall moves from their previous songs this year. “Hyde” was particularly entertaining to watch because the group is separated into Team Jekyll and Team Hyde and in the very end of the song, the members of Team Hyde “kill” Team Jekyll. My favorite performance from them is every time they performed on Inkigayo because Inkigayo really gave them the best camera angles. While their comeback stage was good, fantastic even, my favorite performance is their goodbye stage with three cannons symbolizing the end of the era. Likewise, every “Voodoo Doll” stage has been captivating, despite the fact that the choreography has less stabbing and I fear for Ravi every time Ken is raised by his wrists and ankles at the beginning.

Also, I make no secret that I love the hell out of Infinite. Like Mark, I also loved the Trouble Maker featuring Infinite stage from MAMA. Not only do we learn that Korea will never really be over the Scorpion Dance, it’s also Infinite’s first time on MAMA.

Speaking of MAMA, Rain‘s performance was…let’s just say I’m pretty sure that was the reason my mom woke up because Rain’s hips don’t lie.

Another set of performances that I loved was every time Block B performed “Very Good.” It was energetic, the boys were having fun, and most importantly, they were back. If I were to name one Block B performance that I loved, I would just say, the whole “Very Good” Showcase that was very, very good. That, and Zico was wearing this sheer shirt for the last set and my now favorite maknae, P.O, did us all a favor by making him wet with water.

Leslie: In addition to all of the wonderful mentions, I’m going to add a few others. The first that popped in my head was Teen Top‘s “Rocking.” That choreography with all of the fancy footwork is fantastic. I have never been a fan of theirs, but after seeing them at KCON and their subsequent promotions, it was great to see how energetic they were as performers. [youtube http://youtu.be/4yYl1DQuuOE]

And no one can deny that Shinhwa owned the choreography for “This Love.” I know a lot of people thought it was kind of silly that they would use vogueing, but I can’t think of many K-pop groups who would be willing and able to really give themselves over to this type of choreography the way Shinhwa did. It made for great performances that were different and fun to watch.

Not exactly K-pop since she’s typically a ballad artist, but I’m going to throw in Ali at the beginning of the year. I love everything she sings, and her live performances are insanely amazing. She can do awesome sass in “Selfish” without breaking a stride, and then she switches gears completely and literally gives me chills with her power ballads like she did with “Eraser“.

Miyoko: SHINee, “Everybody,” because they made a plane with their bodies and Onew was the propeller (even though he unfortunately ended up hurting his shoulder).

Nicholas: The performance that I enjoyed most this year (and have it archived on my Cable Box) would be Baechigi‘s “Shower of Tears,” not with Ailee, but with Yang Jiwon instead (that girl in the MV). While she might not scale the same technical highs as Ailee, I enjoyed Jiwon’s rendition just as much for its slightly warmer tone, and how it seemed to suit the song better.

As for another song that I liked, but for the energies displayed, it would have to be B.A.P‘s “One Shot.” Intense choreography and a song with punch made it one I turned up every time it was being performed. Shame about the lack of wins though.

Laverne: I definitely liked the camera work for Exo’s “Growl.” It felt innovative and interactive even if the live performances weren’t as well-captured as the MV. And like Erika and Pat, I loved Vixx’s dances because they incorporated elements from previous songs. For example, a portion of their dance for “Voodoo Doll” is a reversed version of what they did in “Hyde.” The continuity really excited me.

I definitely have to second Teen Top’s “Rocking.” I’ve never gotten into Teen Top but I have watched “Rocking” live so many times. How can they move their legs like that when I can’t even walk without tripping? Life is not fair.

I also enjoyed Sistar19‘s “Gone Not Around Any Longer” and Sunmi‘s “24 Hours” for the dance during the tango break. I’d love to see more artistic expressions like that.

Lastly, M.I.B‘s “Dash” is one which I never expected to like so much. It may sound strange but I really liked the stiffness of the female dancers. They shined most during the chorus and I’ll admit that I have attempted that dance.

Fannie: Like practically everyone else on the team, I also enjoyed watching “Growl” performances (although I couldn’t stand to watch “Wolf” — not even a human tree of life could save a bad song for me), and like Amy, I especially enjoyed the performances that were filmed in a one-take style similar to in their MV.

Choreography and formations are always designed to look best when viewed as a whole, so it really kills the experience when music shows force us to piece together performances through glimpses of choreography mixed with random close-up shots that are switched out every three seconds or so; it tires my eyes out. Then again, sometimes I have to take a step back and just be grateful we’re no longer subjected to the 360-degree spinning camera shots of the ’90s anymore.

Speaking of great camerawork and stagework, I loved everything about this particular performance of Kahi‘s “It’s Me” on Show Champion.

I was also a big fan of Spica‘s “Tonight” especially after watching the emotional and cathartic journey leading up to it on Hyori’s X Unnie. Their performance on Sketchbook was a particular favorite of mine, as the simplicity of the setup lets their spectacular vocals take center stage.

Bada‘s stunning cover of Jeon Young-rok‘s “Sparks” on Immortal Song 2 is a must-watch and was my favorite out of her many amazing performances on the show. Also worth a mention from Immortal Song 2 is Baekhyun and Chen‘s cover of “Really I Didn’t Know.”

Mark: I’m going to up vote Sistar19 and Sunmi’s performances just for their wonderful dance breaks alone. One other performance that really stood out this year has to be After School‘s “First Love.” Bonus points for continuing promotions despite all the bumps, bruises, and injuries.