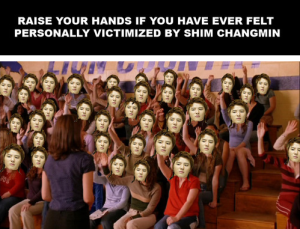 As diverse a musical genre as K-pop is, it often takes itself way too seriously. That’s why it’s so easy to poke fun at it and make jokes of our favorite and least favorite idols. Jokes not only allow for fans to make light of K-pop’s oftentimes stern and humorless personality, but it also allows them to be creative in a way that expresses their love and contribute to fandom. What are your favorite K-pop jokes?

Nicholas: Which member in 2PM is always missing the dance steps?

Nichkhun cause he is always khun-fused!

A: Let’s settle down to watch the latest SMTown documentary!

B: Sure! You want some Lay’s with that?

Shweta: Here’s a super cheesy one.

If you’re being attacked by a hive, which idol group’s help would you seek?

My favorite K-pop jokes aren’t really traditional jokes. Instead, it’s the random/inside joke kind of stuff on Tumblr that basically put me inches from laughing to death. I still cannot understand how people can be so brilliantly funny.

Laverne: What did Tasty say when a fan suggested twincest?

What is MBLAQ‘s favorite month?

What is GD‘s favorite position?
On TOP.

Pat: A couple of wolves infiltrated Woollim and ate a pair of boys. They were Tasty.

Another one that wondered on my dash the other day was: What was TOP called when he was younger?

Mark: Why did a group of Shawols squint their eyes?

They thought they saw something Shinee. 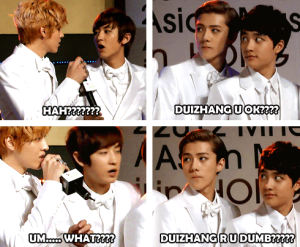 Why did the K-pop cross the road?

Because it wanted to crossover.

What’s the best pickup line to use on Hyuna?

How did Arnold Schwarzenegger greet a 4Minute fan at his home state?

Patricia: There was one joke I came across on Tumblr a while ago that went something along the lines of, “How do you take a picture of an Exo member from afar?”

I stared at this joke for 10 minutes while sounding out Xiumin’s name repeatedly in an embarrassing attempt to understand the punchline until I realized that the majority of fandom pronounces “Xiumin” like “shoo-min” which sounds like “zoom in.” I’ve always pronounced Xiumin as “Hshiou-meen” because that’s how you say it in Chinese, but apparently the Exo fandom (as well as the official Korean spelling of Xiumin’s name, 시우민) believes otherwise. 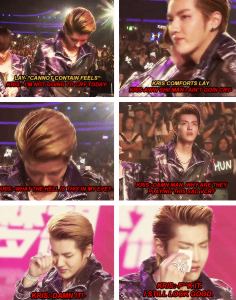 Mark: There are like a million Exo pun jokes on Tumblr.

What’s the official religion of Exo?

Tao-ism. Or was it Kris-tianity.

Pat:  I think it was Kris-tianity back when people thought Kris was cool, which we all know isn’t true.

Fannie: There’s also our unofficial theme song (you can deny it all you want, Amy!).

Listen to my Seoulbeat (it’s beating for you).

I guess it’s not really a joke in the traditional sense, but I’d say it’s still pretty punny.