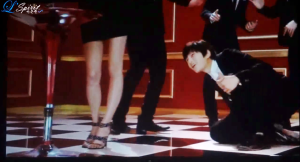 The only Inconvenient Truth in Infinite’s “An Inconvenient Truth” is how much we need to discuss it as a K-pop community. Be warned for a discussion on sexual harassment, rape culture and poorer quality images screencapped from the video.

“An Inconvenient Truth” is a music video from Infinite, not officially released but shown during concerts. It is from the perspective of a man telling a woman not to dress sexily, for it is the inconvenient truth that she will be harassed. The music video takes things to another level, showing Infinite members plying her with drinks to get her drunk, sneaking peeks of her breasts over her shoulders and kneeling down to take photos up her skirt. Uncomfortably, because the fancam of the video was taking during a concert, the watching of this sexual harassment on screen is paired with screams of excitement in the background. The message of “An Inconvenient Truth” as a song is already problematic, and the music video, for all it claims to be protecting the woman from this behavior, in fact glorifies this sexual harassment.

How far have we gone that these are things that can be portrayed so lightly and without actual care? The woman in the video is never truly bothered by the experience, but rather teeters on the border, expressions poised between languid enjoyment and being uncomfortable, ambiguous enough that we can take silence for consent. The male, in contrast, is far more bothered, pleading with the careless woman to take better care. The lyrics back this up, saying that:

It’s way too short, what’s up with that skirt?

Why did you have to wear that on a windy day like today?

You’re not even worried, you’re scoffing at me, making me into a narrow-minded man

Do you really not know?

And also, justifying himself: 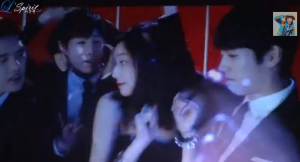 It says that the woman does not care enough to take care of herself, and places the hapless male in the role of the protector. Some say that this is out of concern, and indeed it is out of concern. But this concern has very damaging results on victims of sexual harassment, be it male or female. It’s not the same as saying that you should be careful when walking into a crime-high zone. This is like people blaming you for having a car when you get carjacked. This concern is based on a few assumptions, which are: 1) If you dress sexily you will get sexually harassed, because in Infinite’s words, “all guys are wolves” and 2) If you get harassed, it was because you dressed sexily.

This is not something that can be easily left behind when people finish watching the music video, like how people can leave behind 2NE1 brandishing guns in “I Am The Best” or Block B raiding banks in “Very Good.” This is a way of thinking about sexual harassment that dictates in real life how people talk to victims of sexual harassment, or even worse, rape. Culture is made up of the things people do and see everyday, and unfortunately things like Infinite’s MV are either going to disgust people or continue making it easy for people to say that the girl had it coming to her. The Daily Mail reports a survey saying that 1 in 12 people in the UK believe that the women is to blame when she is raped (the statistics for sexual harassment haven’t even been put in yet). 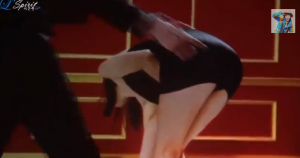 There are tangible results that come out of a group of people saying this. For one, women (and I’m quite sure the stakes are very high for male or transgender rape victims here as well) are afraid of reporting being raped, because there have been too many instances of people blaming the victims instead. 75-95% of women in the UK do not report instances of rape. 75-95% of women do not report an assault that leaves them physically injured, mentally traumatized, even suicidal in some cases. It’s not like falling down and getting a cut and letting it heal. Sexual harassment episodes and rape episodes affect the lives of victims for decades. And the shame associated with it is often enough that victims sometimes believe that they are ones responsible for it too, when the fact is that sexual harassment or rape is wrong.

For Infinite to release a video and portray males as the bulwark between a female and other males, because males are wolves and it is the Inconvenient Truth that dressing sexily will get you harassed, is frankly untrue and hurtful. Getting aroused does not give someone the license to force themselves on someone else, stereotyping males as wolves is unfair, and anyway the assailants for two-thirds of rape victims are people they know, not unknown strangers in the bar. If you go down to child abuse, it’s a shocking 90%. The argument for victim-blaming is patently false, or otherwise overwhelmingly exaggerated, to the extent it obscures the actual conditions in which most rape takes place. Knowingly or not, Infinite’s video helps to keep this part of our culture that places the blame for on the victims going, and sets free most of the perpetrators. 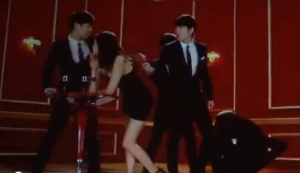 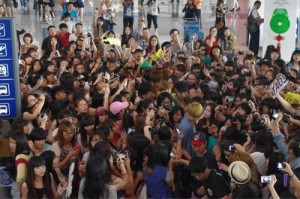 It’s called harassment for a reason. Either male or female, people don’t like being harassed. When the pictures of Kris being blockaded in his car by sasaengs were posted onto Tumblr, people were universally vociferous in their condemnation of these acts. These males in the video are doing exactly the same thing – crowding the woman, taking photos of her with their cellphone, wanting to get a piece of her – why is the same criticism not given to this video?  Because her clothes implied that she was asking for it? Well, idols like DBSK and EXO are also sexualized in their videos (have you seen mirotic?), undergo physical surgery to make themselves more attractive, dress up to play off their shoulders and abs and legs and whatever else – and go around telling fans that they love them. Aren’t they asking for it as well? If they appear in public, obviously they ask to be mobbed. And groped, in the case of some airport incidents.

Well, obviously not. What if a video had been made instead glorifying sasaeng behavior, showing them throwing underwear at idols, stalking them and groping them in the midst of the crowd rush? The sasaengs could dance gleefully in between the scenes to show what a big joke this is. No one could dismiss that as a joke. Why is this form of sexual harassment something that can be taken so lightly? The video of the music video was taken from a fancam from an Infinite concert, and you can hear people screaming happily in the background as this plays on, so at least one or two of us K-pop fans do find this unproblematic.

For most of us K-pop fans, we spend a lot of time in K-pop, keeping up with the latest releases, watching videos over and over again, writing fanfiction, scrolling through Tumblr, tweeting about music and K-pop, to the extent we probably spend more time on it than we do on some of our classes. If we are shaped by the things we do and see, then we should start taking K-pop, the place where most of us spend a lot of our time in, seriously. 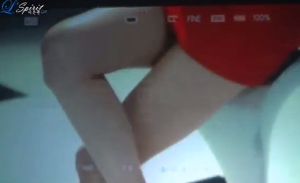 This is not a post written to specifically bring down the name of Infinite; one could actually argue this poorly conceived music video does a good job of that on its own. There are many other groups out there with problematic messages as well, but discussion needs to start from somewhere, and Infinite’s example is, you have to admit, a cut above the rest. It does no good for Infinite to be releasing material that can and will do so much damage to its reputation on its own.

What responsibility do we as K-pop fans bear for condoning such things? Nothing, some might say. Everything, others will say. If K-pop culture is built on millions and millions of things, from videos to photoshoots to variety shows, then yes, it’s hard to see what speaking up against one video will do, or what impact one video can have. But if this is not the culture that we want to see, and we know for a fact how damaging these assertions can be to actual people in real life, then it is our responsibility to call out these things when we see it, even if it is by our favorite idol.

AngryKpopFan has a petition against this, which you can take a look at and decide for yourselves. Just please, before anyone says that getting harassed by horny males because someone dressed sexily is the “An Inconvenient Truth,” think of people affected by this line of thinking that places the blame on the victim, such as the college student getting threatened with expulsion because she reported her rape earlier this year, or the rape victim disbelieved by the police when she tried to report her rape. We might just be normal K-pop fans blogging without a care on the internet, but I’d like to think our brains and hearts work just fine.