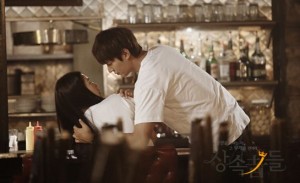 After my initial impressions of Heirs, I’ve been curious to see how to show would continue. Would it improve or not?

Well, I’m happy to say that it is a slight improvement although my enthusiasm has died down a bit. Heirs has a flimsy premise and many, many flaws but somehow it still makes me want to tune in and see what happens.   Spoiler alert!

Episodes 3 and 4 served to further introduce our characters and set up the overall plot of the drama. We learned more about how everyone — and I mean everyone — is connected. As it turns out, Chan-young’s current girlfriend, Lee Bo-na, is Tan’s ex-girlfriend. We also find out that Chan-young’s father is the secretary for Kim Won. And if that’s not enough, Secretary Yoon was somehow involved with Rachel’s mother 20 years ago. Could Rachel secretly be his daughter? No possibility is too absurd for this show!

After Kim Tan semi-confessed his feelings, he and Eun-sang traveled around Hollywood and California in general. Their interactions were cute and it’s evident that Kim Tan has come to like Eun-sang. What was definitely not cute, however, was Tan’s lying. Tan did not inform Eun-sang that Chan-young had replied to her in hopes that he could spend more time with her. While the story tried to frame this in a sweet way, I found it unromantic, selfish, and a bit creepy. 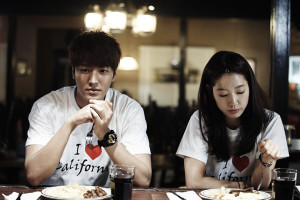 However, their constant missed encounters in Korea were enjoyable and we got a glimpse of Eun-sang’s budding feelings for Kim Tan. Although her feelings have been dying down since she returned, it is obvious they will flare up once she realizes they live in the same house together.

What I found extremely fascinating in these episodes was Kim Won’s interactions with Kim Tan and Rachel. It was heartbreaking to see Tan elated to see his brother when Kim Won wanted nothing to do with him. It was also painful to watch Tan’s hopeful naivete that his brother wouldn’t oppose his return get crushed; I’ve never seen Lee Min-ho give off such an air of innocence in his acting before.

And strangely enough, Kim Won didn’t mind Rachel accompanying him to his mother’s grave. It was the first glimpse of humanity that we see from Kim Won but hopefully not the last. Rachel was even bearable in this scene and it showed that she isn’t always an unthoughtful, mean girl. I hope the show continues to explore this strange dynamic. 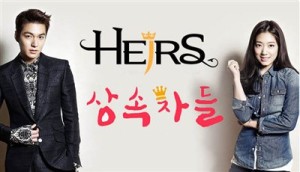 The show also hinted at a potential love interest for Kim Won — the tutor of Hyo-shin. However, she ignores Kim Won’s call leading the viewer to speculate about her feelings towards him.

My interest was also sparked about the mysterious relationship between Kim Tan and Young-do. The two formerly were best friends until something happened between them in the US. We aren’t told exactly what happened but since this is Heirs, I’m guessing it was something dramatic.

Speaking of Young-do, the boy is an enigma. He is rude and callous to everyone around him save for a few close friends and (of course) our heroine. His father and he definitely have issues but the reason why remain a mystery. This adds to his unpleasant demeanor but there are hints of a softer character hidden inside his mischievous bravado. I’m eager to learn more especially after watching next week’s preview. 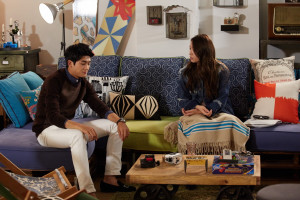 Heirs is obviously a show about characters and even characters that are presented as unlikable have other sides to them. Lee Bo-na is shrill and grating but she is slowly growing on me.

Perhaps it’s her obvious love of Chan-young that is endearing, though I must admit she often goes overboard. Kim Won remains a mystery as he is harsh to his brother but for some reason still keeps a picture of Kim Tan in his room. Is it an act or is he truly that callous?

The only character that doesn’t interest me is our heroine, Eun-sang. Let’s face it, Eun-sang doesn’t really have a personality. Almost every other character has a distinct personality but I can’t pick out any personality traits of Eun-sang. Sure, she is hard-working and dreams of a better life, but what does she like? What are her interests?

Heirs’s premise is a bit ridiculous but because the characters have multiple dimensions and the actors that play them are talented, it doesn’t bother me as much as it could. The real draw for me is the characters. I want to know what makes them tick more than I care about Eun-sang and Kim Tan getting together. But hey, at least we’re back in Korea. What secrets will come out next week?

Seoulmates, what is the most absurd explanation for the damaged friendship between Kim Tan and Young-do? Let’s get dramatic!