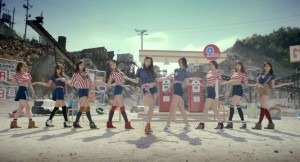 When Nine Muses announced their comeback with the title track “Gun,” I imagined their comeback to entail “Hoot”-esqe sexy spy video with choreography that incorporates cliched gun posing, built around a sultry sounding pop song. Yet, this track diverged hard from any gun-related cliches and took a different route.

“Gun” is much peppier than the other two Nine Muses singles this year, “Dolls” and “Wild.” The semi-retro feel they adopted has been more or less ditched for a KARA-inspired chorus-driven tune.

The song is incredibly catchy and stays more in the sassy lane than in the sultry one, but it works to their favor. “Gun” is fabulous – no part sounds extraneous; the tune fits their voices; and the background sounds that cue memories of spaghetti-Western music ends up being a perfect fit. Also of note is the alluring, nearly-raunchy sounding guitar bit at the opening which sounds fabulously seductive in the best way.

In fact, I’ve enjoyed each of Nine Muses’ promotions because their singles were diverse enough to offer something new without straying from what the members do well and their latest track, “Gun” seems to be a great finisher for their releases this year.

Instead of a sexy spy video, we got a sexy gas station,  in a decidedly unsexy apocalyptic wasteland,  serviced by Nine Muses.  What makes the “Gun” music video odd is the strange visual contradictions that seem nonsensical. Of course, it’s not uncommon for K-pop music videos to be aimless with very little meaning, but the transition during the bridge to the idyllic field with the girls blowing bubbles and holding balloons is just silly and out of place and probably shouldn’t have been featured at all. 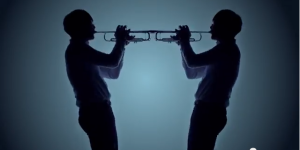 Shots that I did love were the silhouette clips at the very end of the video. The man playing the trumpet and two members doing dramatic moves out of a tango routine looked great set against the light blue background, and I would have loved to see an extension of these scenes.

Other than those great silhouette shots of the tango, the choreography wasn’t too eye catching. The dancing looked more inspired than “Dolls” and “Wild,” but music videos didn’t do anything to highlight their choreography, similar to their other music videos. 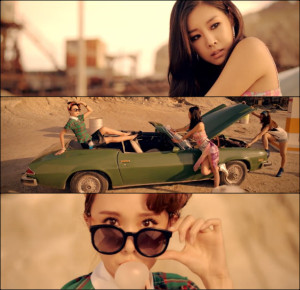 The gas station concept truly played on the last fading days of summer, as reflected by the fashion. Sporting patterned shorts, crop tops, cute dresses, and sunglasses and headbands as accessories, Nine Muses looked like they they were suited for a weekend outing on city streets rather than setting up camp at what appears to be the last gas station to ever exist on Earth.

All in all, “Gun” is a good addition to Nine Muses’s repertoire. For a song that demands a man to stop hesitating and go after the girl he wants, the video provides just the right amount of sassy sexiness, something Nine Muses has down pat by now.

It’s a good thing that Nine Muses avoided gimmicks with “Gun,” even though the possibilities were endless. Subtlety can be a good thing, and for that “Gun” deserves a solid 4.2/5.