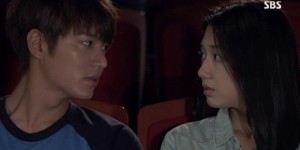 What did the second week of October bring for K-pop fans? Confusion for Everybody as things didn’t turn out quite as expected–it was all a tad more Crooked. The weight of expectations might have been a bit too much for the Heir to K-dramaland to bear, as it got off to a mediocre start that was more commonplace than extraordinary.  I do have hope that Heirs will get better, hopefully when it returns to the motherland where we won’t have to deal with bad US stereotypes and cringe-worthy use of the English language.

The following are the type 5 Things that happened in K-pop last week that I thought were a bit more special than the rest.  If you are not up-to-date with your K-pop and don’t like spoilers turn back now or forever hold your peace.

Jung Joon-young released the MV for the next release from his debut album “The Sense of an Ending.” The MV starred his We Got Married wife, actress Jung Yu-mi. Love the earnestness of this rock ballad and his guitar solo. I think I’m becoming a Jung Joon-young fan.

While still on their Jeju Island trip, We Got Married‘s youngest couple, Taemin and Na-eun,  tried their hand at making wine the old school way–by stomping on it. It was cute and they looked like they had fun–scripted or not.

3. A Very Good Come Back

Congratulations to Block B for winning their very first #1 on a music show on this past week’s Inkigayo. The group has seen more than their fair share of trials and tribulations culminating in this past year’s uncertainty of even their very existence with their court battle against their former company.  But Block B did come back and with the help of their fans–made it Very Good.

It was a hard decision trying to pick which highlight from last week’s Running Man to add to 5 Things.  It was a surprisingly enjoyable episode with guests Chun Jung-myung and Kim Min-jung, who are in the promotions cycle for their movie Queen of the Night which will debut on October 17th. From Lee Kwang-s00 dressing up as a girl to compete with Song Ji-hyo and Kim Min-jung, to Chun Jung-myun and Yoo Jae-suk wrestling with Kim Jong-kook, to Song Ji-hyo beating up Kwang-soo and HaHa–it was a tough choice.  In the end it had to be the manhandling of Kim Jong-kook–it’s not everyday that Spartakooks gets taken down so thoroughly in a game, and a physical one at that, in Running Man.

Good Doctor was an enjoyable drama, not one of the best medical based ones ever, but it made you care about the characters and had a story line that worked–although it was predictable. One of the best scenes from the last episode was when the doctors and some of the nurses of the Pediatrics ward put on a play of Peter Pan for the children. I wonder if they got bonuses for doing those scenes.  Another gem–Joo Won‘s Park Shi-on ripping into a new intern played by his Bridal Mask co-star Park Ki-woong.