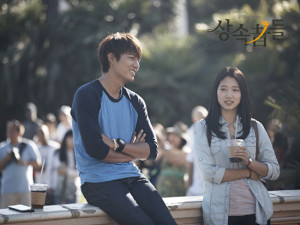 After months of teasers and promotions, Heirs has finally aired! And with it we get shirtless Lee Min-ho, stereotypical chaebols, awkward acting, a cliched candy heroine, and … emotional depth?

Heirs introduces us to a plethora of characters in the first half, all somehow connected to each other. Lee Min-ho plays Kim Tan, a young chaebol exiled to California by his older brother Kim Won (Choi Jin-hyuk). Kim Tan’s fiance, Yoo Rachel (Kim Ji-won) has family problems of her own as her mother plans to marry the father of Kim Woo-bin’s Choi Young-do. And because there is no such thing as coincidences in dramaland, Young-do is connected to Kim Tan by a mutual dislike.

To round out the main players of our cast, we also have our heroine Cha Eun-sang (Park Shin-hye) who goes to California in search of her sister Stella (Yoon Jin-seo), her friend Yoon Chan-young (Kang Min-hyuk), and Chan-young’s annoying girlfriend Lee Bo-na, played by Krystal.

Let’s get the bad out of the way first — the horrible acting. In general, the Korean cast is fine, save for some awkward English and Krystal’s acting, but the Americans in this show are cringe-worthy ridiculous. I understand the stereotypes Heirs is trying to portray but even I could act better than that. Surfer dude’s personality, enunciation, basically everything was over the top while Stella’s boyfriend was extremely wooden.

I can somewhat excuse Surfer Dude (his name is Jay) but I wish we learned a little bit more about Stella’s situation. Her plight is something that many immigrants face especially those who immigrate without their families. It’s an extremely serious issue but it comes off as partly comical because of the atrocious American acting. Not to mention that the American stereotypes are very overplayed. Heirs needs to get itself back to Korea ASAP.

However, I was surprised to find so much good in Heirs. There is a lot more emotional depth that I expected. Even though the heroine as a candy girl trope has been used time and time again, we get to see the emotional toll it takes on Eun-sang. In most other dramas, that emotional toll is skirted and we really only see the heroine at her optimistic, perky side.

There was also a lot of emotional depth between Eun-sang and her mute mother (played by veteran actress Kim Mi-kyung). It was heartbreaking to watch Eun-sang decide to leave her disable mother, believing that she would never return. It was also painful to watch Eun-sang scold her mother for signing in public. It’d be interesting to know if this was an accurate portrayal of Korean sentiment towards signing and disability. 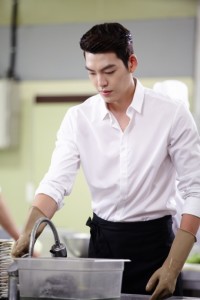 As I mentioned before, the Korean acting is pretty good. And while I enjoy Eun-Sang and Kim Tan, it’s the side characters who steal the spotlight. The scene between Kim Tan’s mother and the chairman’s wife had me laughing but the subsequent breakdown of Kim Tan’s mother immediately had me feeling sympathetic towards her.

In addition, Kim Woo-bin’s acting blew me away even though I’ve been watching his dramas ever since White Christmas. It’s amazing how expressive and alluring he can be when given a decent script.

The romance exceeded my expectation as well; I didn’t think it would get started so fast. In the first episode alone, Lee Min-ho’s gaze at Park Shin-hye nearly melted my cold, cold heart. As the drama went on, it became clear that his character isn’t the stereotypical cold-hearted chaebol (unlike his brother). He is warm-hearted and thoughtful though seemingly lost without any meaningful relationships in California. Of course, that’s what Eun-sang is here for and I can’t wait to see their romance blossom. 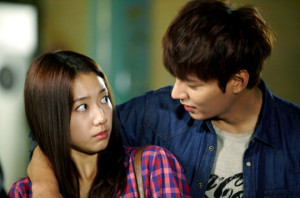 Heirs is much, much better than I expected. Though it is more dramatic than comedic, so far it has done a good job of balancing out heavy emotional moments with lighter ones. I’m also surprised that I was able to connect emotionally with the show. That emotional undercurrent is what a lot of dramas lack and hopefully Heirs sticks with it.

The plot itself isn’t anything unique but the acting carries it through and the majority of the characters are dimensional instead of flat. Overall, I’m excited for this drama and I sincerely hope Heirs doesn’t lose itself halfway through the show.

What are your thoughts on Heirs? Who are your favorite characters so far?