Lim Kim Gives Us More of "Her Voice" 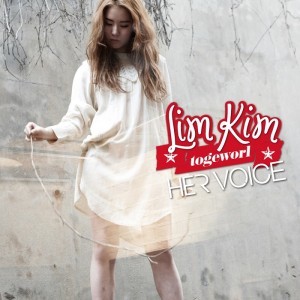 Looking back on the first three quarters of 2013, Lim Kim of Togeworl fame’s solo efforts stand out. Like Lee Hi, she has offered a quieter, more jazzy and more sultry alternative to the usual K-pop standard, which can be bombastic even in its balladry. Less bombastic does not therefore mean that what she offers has less feeling. Indeed, her music can be quite emotional, as we witnessed earlier this year with the release of “All Right,” which came with a music video that managed to be beautiful, endearing, vaguely frightening and annoyingly repetitive (like the song) all at once. This track was rather surprisingly able to capture popular attention right at the start of the summer, which is usually a time when people want their music to speed up and be lighthearted — basically the opposite of the feeling that “All Right” captures.

This month, Lim Kim has returned to really put the last nail in the summer coffin with mini-album Her Voice, which opens with with the Korean version of “Urban Green,” a song that is sweetly performed, even if the lyrics are completely depressing. Since she kickstarts the album with the words, “I laid down and the sunlight became powder, drying my moist eyes,” it becomes clear that this album is not going to be all fun and games a la Super Junior’s “Mr. Simple.” A perhaps more reasonable comparison is Lee Hi’s “It’s Over,” which managed to capture a break up without making the listener want to cry. Really guys, if you didn’t get the memo, Lim Kim wants you to know that summer is over, and it may have gone rather badly.

But the audience will keep coming back for more because although Lim Kim’s words may not brighten your day and she really only sings about one thing (love), she sure does have a lovely voice. One of the strengths of this mini-album is that her voice shone through, no matter what style she is singing in, and there’s a diversity of styles on display here. She moves from wispy melodies on “Urban Green” and “Rain,” which carries on the emotional themes explored in the former, to a slow R&B-inspired groove with guest rapper Swings on “Voice,” the first single release off the album.

The truth is that Lim Kim’s “Voice” is alright, but as the lead single for the album, it’s a bit disappointing. I wanted to like it and listened to it over and over again in an effort to find the diamond in the rough. There was a partial success: the chorus — or most of it anyway — really grew on me. The writers tread a dangerous line of 80s cheesy synth though, and on the way out of the refrain, they slip and fall. On top of that, here’s a diss for Swings: his rapping doesn’t do much for the track. While as usual his sound his sexy and the words are sweet, the rap does nothing but interrupt the song.

The pace of the album begins to pick up a bit with the big band sound in “Say Love,” and continues into the bossa nova beat of “Drunken Shrimp.” This song is fun, if only because it’s called “Drunken Shrimp.” The speedy tempo and Spanish guitar compliment her voice nicely, and it’s easy to imagine that this track would make an excellent second single release. It would be interesting to see what the director of the “All Right” music video would do to bring “Shrimp” to life, particularly given suggestive lyrics like these:

One potential misstep on the album is that the track which follows “Drunken Shrimp” is also set to a bossa nova beat. “Truth Never Mattered” sounds redundant, almost like the music player has broken and is playing a strange version of the last track. Besides, by the time we hit track 6, maybe we’ve gotten the point: love often mostly sucks, and the truth never mattered, emo emo, etc. etc. Okay, maybe that’s a little bit harsh, but the song almost seems like it’s asking for it.

The album ends essentially where it begins, this time in English with new lyrics. Lim performs the English version of “Urban Green” admirably, although the words are sometimes hard to parse. Her pronunciation of “fragrance” is completely incorrect and simultaneously beautiful sounding thanks to her voice. She definitely has a future in performing songs of this type for a western audience, should she wish to. Of course, in that scenario, she will be entering a very crowded field full of people who have very nice voices and sad stories to tell. She’ll have to work harder than she does here to stand out in the crowd.

That may not be her goal though, and it’s not necessarily the most meaningful standard to apply to her. In the end, Lim Kim has definitely made her point: she can sing and her musical interests are broad. But Her Voice falls short of achieving what she captured on A Voice. It is missing that one impossible to forget track like “All Right” or something that might inspire dancing like “Colorring.” There’s definitely nothing as fantastical as “Alice.” In many ways it is more conventional, and it is the worse for it.