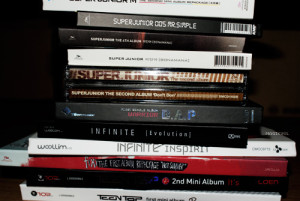 K-pop is a visual media. With flashy outfits, high production MVs and multiple performances, it can be easy to forget about the music. And even though the mass production of K-pop has resulted in similar sounds, it has also lead to many amazing tracks.

Sometimes instrumental tracks shine because the quality of the track is just plain outstanding. Other times it’s because the lyrics and vocals that accompany the original are subpar.

Take “MaMa Beat,” for example. LC9 can sing — their covers prove that — but they do not do justice to the background track of “MaMa Beat.” Listen to the original and compare it to the instrumental below:

The chorus of the original was overly repetitive and the singing was overpowered by the music for most of the song. The instrumental version is repetitive too, but by cutting the lyrics out, all the little nuances that were hidden by the singing become audible. In the first 30 seconds alone you can hear not only the different synth elements applied but also the pitch changes of each element. These small details enhance the song immensely.

Another song that falls under this category is Rania’s “Pop Pop Pop.” The original version is a forgettable track with so-so vocals. The background music, too, is unremarkable… until you listen to the instrumental version. Though the instrumental version might not appeal to everyone, it could easily fit in on an EDM playlist. It follows a similar trajectory with an upbeat vibe and danceable beat that kicks in soon after the song starts. The single notes sprinkled throughout are a treat and break up the repetitive beat that forms the base of the song.

Lyrics are supposed to enhance the song and often provide the hook to make the song catchy but, as we know all too well, that isn’t always the case. Some other songs that I think are better sans singing are Skarf’s Oh! Dance, “I Like That” by GLAM, “Rum Pum Pum Pum” by f(x), and Follow Me by Odd Eye.

On the other hand, we have songs that are decent — perhaps even good — whose background music deserves to be recognized for its quality.

One such song that immediately stands out to me is 2NE1‘s “I Love You.” While it garners mixed reactions from fans, listening to the instrumental version is a pleasant experience. The song is light and once again, elements that were hidden by the vocals are now audible.

In most songs, the bridge lead into the chorus, and that’s when the listener picks out the rise to the climax/chorus of the song. In instrumentals, that rise must be properly conveyed by the music or else the song remains flat and boring. In the instrumental version of “I Love You,” the music does this well and throughout the song it continues to play with tone and pitch changes that are often missed when listening to the original.

Stepping away from electronically dominated tracks, Block B‘s “Romantically” deserves recognition for its superb background music. “Romantically” blends jazz and R&B elements to create an amazingly smooth song. I love how the keyboard and drums trade off with each other, each complementing the other while one takes center stage. Though subdued, this instrumental track is still enticing.

Other notable instrumentals include, but are definitely not limited to, “Love Ya” by SS501, Ailee’s “U&I”, M.I.B.’s “Men In Black”, and Tablo’s “Tomorrow”.

Listening to instrumental versions of a song is a great experience. It’s a new way to rediscover tracks that you love.

Critics of K-pop often argue that K-pop has no originality and that the mass production of music leaves no room for quality, but I disagree. Though there are mediocre and below average songs, there are also songs of great quality. Even though much of K-pop is electronically dominated, it still takes effort to produce the background music, and we often forget to listen and appreciate the background music a little more. Lyrics are fine and dandy, but great instrumentals can make or break a track.