Kara are "Fantastic Girls" in Japan

When Kara released their first set of teaser pictures for their latest Korean comeback, fans were absolutely thrilled. Their last comeback in Korea was over a year ago with the mysterious “Pandora,” and the fans in Korea surely missed Kara in their time away and promoting overseas. Moreover, the androgynous teaser pictures – showing the girls of Kara adorned very dapperly in suits and short wigs – came off as a electrifying surprise. The androgynous concept was something that the girly and cheery girls of Kara have never done, and surely it wasn’t something fans would expect from such a demure group like Kara.

But in the massive hype surrounding their pending comeback, a recent release of theirs might have been overlooked, this release being their most recent Japanese album Fantastic Girls. This effort is Kara’s fourth Japanese complication and seventh album overall and was released only at the end of August, just days prior their Korean comeback.

In the prime of Hallyu’s power in Japan, Kara was renowned to be one of the groups leading the pack of idols making Japanese debuts. They were massive successes in the foreign nation, being one of the most successful Korean acts to hit Japan. They charmed the Japanese public with their signature girl-next-door charm and the remakes of their catchiest hits, and their popularity only grew as they released original Japanese singles.

Now that Hallyu’s influence has waned in Japan, Kara remains one of the few groups who has still managed to retain their influence in the nation. As Erika described, rather than simply highlighting their charms as a foreign act like some of their fellow contemporaries, Kara has maintained their success through adapting to the expansive Japanese pop industry. 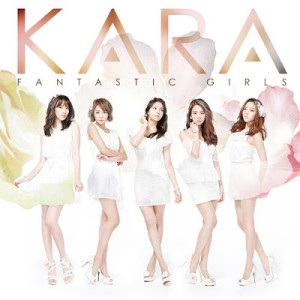 Admittedly, this feat was slightly easier for the girls of Kara as they have arguably always carried traits of a traditional J-pop girl group, but the girls’ efforts to appeal to the Japanese idol industry are truly notable. They rigorously expanded their grasp in the Japanese language to make successful appearance on Japanese television, and they altered their signature trademarks in Korea to assimilate the J-pop sound and appeal to the ears of the Japanese public.

Their efforts have seemingly paid off, since while their rivals have faltered drastically in popularity as Hallyu’s presence dwindles in Japan, as previously mentioned, Kara has still remained strong. They still continue to produce chart-topping singles – releasing over ten successful singles in Japan alone. Moreover, their Japanese discography is probably just as expansive as their repertoire in Korea at this point, as the girls now have four full-length Japanese albums circulating the market with the release of Fantastic Girls.

As I said before, Kara has worked hard to adapt to the J-pop sound. The entirety of Fantastic Girls reflects that. Through and through, all ten of the tracks in the album are pure and unadulterated J-pop, with slight influences added in to keep the tracks from being generic and to help them retain Kara’s trademark charm.

The album starts with its lead single “Thank You Summer Love.” Right away one can see the obvious similarities between “Thank You Summer Love” and its predecessor “Go Go Summer!” “Go Go Summer!” was arguably Kara’s most successful original lead single, so it’s pretty understandable as to why Kara would want to imitate it. Both are peppy summer anthems with an energetic bubblegum sound and exceedingly girly execution. 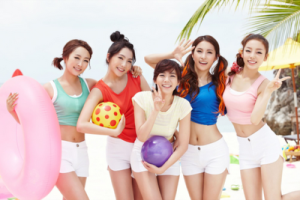 In terms of quality, though, “Thank You Summer Love” lacks the electrifying and enriching spunk that made “Go Go Summer!” so outstandingly enjoyable to listen to, making it a decent successor at best. Thankfully, while it lacks the spark that made “Go Go Summer!” so addicting, “Thank You Summer Love” has this more laidback yet eager sound that perfectly embodies the lazy feelings that come with the end of summer. In particular, the surprisingly relaxed guitar solo in the bridge and endearing main chorus are the track’s strongest assets, making it a satisfying listen that’s pretty representative of the sentiments of the entire album.

“Burn! Burn! Heartbeat” continues where “Thank You Summer Love” left off with its exhilarating sound and danceable melody line. Much like its excited title may suggest, the song is very energetic and animated, making it a perfect choice for a workout song. Its electronic sound is heavy-hitting and uplifting at the same time, and the girls’ light vocals manage to carry the song with minimal effort. I especially love the active buildup to the chorus, and while I feel the chorus could have better used the suspense the bridge built for it, the overall effect is very rewarding.

“Bye Bye Happy Days” is the effort’s other lead single, and it follows “Burn! Burn! Heartbeat” with another great transition. “Bye Bye Happy Days” carries the same energy as the previous two songs but is much more sentimental and reminiscent than the prior tracks. The song has this sentimental perkiness that you can only find in a girl group song, and while one would think the song’s sugary sappiness gets grating, I actually found it pretty enjoyable. I love the delicate bell-like sounds sprinkled throughout the whole song, and the girls have the necessary charm that convinces you to tune into the entirety of the sugary song. 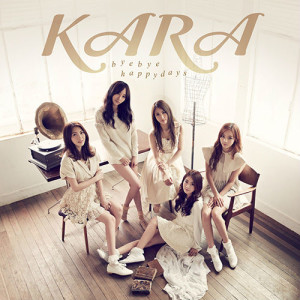 The album changes its pace slightly after “Bye Bye Happy Days” with “Rescue Me” by smoothly cooling off some of the relentless pep of the preceding pieces and instead adopting a more retro sound. “Rescue Me” is a decent song with a catchy hook and bridge but the remainder of its chorus was a bit anticlimactic, and the song’s verses needed a little more spice to stand out.

Moreover, the voices of the girls of Kara have an infamous tendency to blend into a chipmunk-esque voice instead of harmonizing when layered on top of each other. While in the previous tracks, the potentially grating effect wasn’t as blatant due to the fervent instrumentals of the earlier tracks. But that’s not the case with “Rescue Me.” The sections where the girls sing in unison get fairly grating after extended periods of listening, definitely detracting the song somewhat.

“Pop Star” continues with the retro sound first established with “Rescue Me.” Appreciatively, “Pop Star” proved to be more enjoyable. Its pace is considerably slower, and the drop in tempo is admittedly refreshing after the high energy present in the first half of the album. After a slow and funky build, the song is transitioned to its rhythmic and melodic verses before leading up to a relatively relaxed chorus. Overall, “Pop Star” is a sufficient track that gave the album some necessary cool down, with my main complaint being the lack of buildup between the verses and the choruses, a feat that other songs in the album executed so well.

After cooling down with “Pop Star,” we are introduced to the first ballad of the album, “Promise.” “Promise” has a very prominent and complex instrumental for a ballad, filled with interesting mix of percussion and light synths. While this made for an intriguing listening experience, admittedly, this also worked against the song as the instrumental overpowered the light voices of the girls of Kara in multiple moments. Nevertheless, the song’s melodic verses and enriching chorus make it a worthy listen, and the progression of the arrangement during the bridge was just top-class. 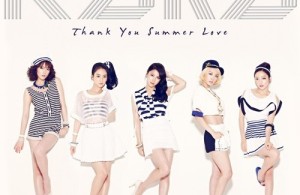 Mid-tempo “Endless Night” speeds the tempo slightly once again, reintroducing listeners with a cutesy retro sound. The unconcerned verses were very appreciated, but a redundant chorus detracted from the somewhat. The next track on the album is “Hold Me,” the second and most traditional ballad of the album. While the track is mainly generic with its overused piano medley and predictable musical progression, the members’ vocals – particularly Gyuri – sound especially wonderful in this track, exhibiting plenty of growth from the members. And considering how Kara is often critiqued for their lack of vocal prowess, this is a very good thing.

Next track “Hanabi” is probably my favorite ballad in the album. While “Promise” featured an unorthodox albeit overwhelming instrumental, “Hanabi” uses a more traditional but equally intriguing arrangement consisting of elegant strings and earthy percussion. And while “Hold Me” ended up being predictable and one-note yet well executed, “Hanabi” has the best of both worlds, being both convincingly executed and musically absorbing.

Contrary to the other ballads of the album, “Hanabi” is very dynamic. Its progression is very unorthodox, being borderline jarring at some points, but the transitions are handled so well that it adds remarkable complexity to the song. To be honest, while I am a also a fan of the last track of the album – a Japanese version of “Date (My Boy) from the girls’ Step album – I really wish “Hanabi” served as the album’s closer. This was because “Hanabi” perfectly embodied the entire idea of the entire album, faultlessly conveying the nostalgic dreaminess of the end of summer.

Despite my ill feelings toward Japanese remakes, I’ll be honest and say “Date (My Boy)” was a pretty great addition to the album. Like I mentioned before, the track has clear Japanese influences that allowed it to fit seamlessly with the rest of the tracks in this J-pop album. Moreover, “Date (My Boy)” is a very quality song. The song is very likable and endearing, much like the girls of Kara, and the execution is natural and genial. And again, thematically, while I would have preferred “Hanabi” as the album’s closing track, “Date (My Boy)” also turned out to be a sufficient album closer, for it allowed the album to go full circle and end with the same energy its started with. 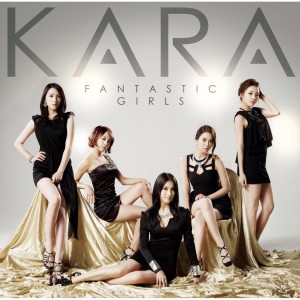 As a whole, while none of the tracks in Kara’s Fantastic Girls really stand out as extraordinarily noteworthy or special, what makes the album so great is its cohesiveness and its direction. Truly, the tracks introduced through Fantastic Girls are better listened to as a whole rather than separately. Markedly, this contrasts greatly from Kara’s Korean albums. After all, despite amazing B-sides here and there, a reoccurring critique in some of Kara’s former work is how reliant their albums are of their title tracks; the side tracks in their old work just paled in comparison to the addictive and catchy lead singles that made Kara famous in the first place.

In Fantastic Girls, while none of the tracks are especially noteworthy, none of the songs are particularly bad either; it simply reaches a nice and comfortable equilibrium that makes for a consistent and engaging listening experience. All the tracks transition wonderfully into each other, and all carry a similar sound and theme. However, at the same time, the album still manages to have a musical diversity that keeps the album from being repetitive or monotonous. This in itself is quite a feat, and for a group like Kara to achieve such an accomplishment like this, it’s nothing short of being fantastic.

Overall, Kara’s Fantastic Girls gets a 3.75/5 from me. Readers, what are your thoughts on Kara’s latest Japanese effort?