Honey G Stuns with "My Love" and "You Fool" 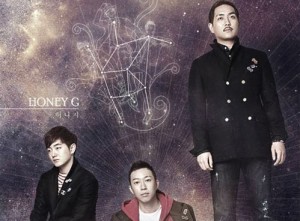 As the first group to be formed on Mnet‘s hit show Superstar K4, Honey G was also the first group of the top 12 of the K4 crew to sign with an entertainment agency. Originally formed by separate acts Honey Brown and Fat Duo, the group came together during preliminaries when judge Lee Seung-chul suggested they join forces and compete as a unit. The three agreed and ended up making it to Top 7.

Earlier this year in March, just a few months after the show’s end, the three joined Chungchun Agency‘s roster alongside Superstar K3 runner-up Busker Busker. Then, at the end of May, member Park Ji-young paired up with Lee Hyori for her ballad duet track “Amor Mio,” even playing piano for it.

The trio finally went into the studio to prepare their full post-Superstar K4 debut. They began last month by first dropping their pre-release track and music video for their own “My Love” (“amor mio” means “my love” in Spanish) on August 19. The music video shows a lighthearted side to the soul influenced group.

We open with a fun animation sequence that reminds me of the Mario Bros. franchise. The three members of Honey-G are at a wedding, that of member Kwon Tae-hyun. Just before they go through with the wedding though, the villain appears and whisks away the bride, not before punching Tae-hyun’s tooth out, of course.

The trio follows him back to his lair where he has her captive and sets his henchman on them. As our fair maiden cries for help, the scene shifts: the song begins, and everything switches into live-action mode with the three members replacing their animated selves and Busker Busker’s drummer Brad Moore as the villain and — returning to work with them again — Lee Hyori as the kidnapped bride. 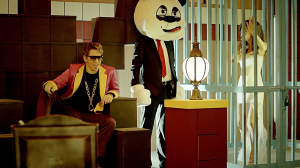 From here, the tone of the music video makes a big jump from somewhat serious to incredibly silly and lighthearted. The three heroes fight Brad’s henchman with an axe, chains, and a fencing sword, not exactly the most effective weapons when they have no idea how to use them. They end up tripping and stumbling each other, much to Hyori’s dismay as she and Brad look on via surveillance, he cackling and she frustrated.

Captured, the members are brought tied up to Brad, but they’re not held for long because they break free and begin to fight with the guards. As member Jae-hyun tries to break Hyori out but fails, she gets fed up and breaks out herself, proving that she is a damsel who’s not really in distress. She then pulls out a pair of guns (that apparently make their victims dance when shot) and proceeds to save the day.

The music video itself is entertaining. The cheesy styling and the exaggerated acting are spot-on with the concept. I also adore the art style of the animation sequence and wish it had been longer. While the live-action is supposed to bring humor, I find it just a bit too silly for the song, particularly the intentionally cheap and cheesy running scene during the transition at the start of the song to be, but a fully animated music video wouldn’t have suited the track either.

The track reminds me of doo-wop with its lightness and the great vocal harmonies, which has more of a retro feel to it. With its lyrics all about being completely head over heels, like in the movies type of love, something more romantic would perhaps have suited it better. The music video is fun, and the song is great in a showtune kind of way. Together though, the track and music video just don’t blend right.

Honey G’s single “You Fool,” released on August 21 in conjunction with their full-length album, does a better job of blending the song style with the music video. Starring Yoo Yeon-seok (Gu Family Book) and Song Min-jung (TV Novel: Love, My Love), the music video tells the story of a guy who is in love with a girl and turns into a fool because of it.

The scene opens with Yeon-seok waking up to a phone call from Min-jung. Her boyfriend is busy so she wants to hang out with Yeon-seok instead. As the best friend who is totally in love with her, he of course agrees and hangs up, and the song starts. He goes about getting dressed and fixing his place up for her to come over.

When Min-jung arrives, she’s all pouty and upset about her boyfriend being busy, but Yeon-seok soon cheers her up. Both in good moods, they decide to go for a bike ride together, all the while joking and messing with each other. As if things couldn’t get more romantic, they pause on the bridge to look out at the view, but to Yeon-seok the only view that matters is Min-jung since he keeps staring at her. It’s sweet but sad because he can’t do anything about his love for her.

Fast forward an indeterminate amount of time, and Min-jung is on a date with this busy boyfriend of hers. Things seem to be going well, and he actually seems really into her. (Darn.) But he gets a phone call and soon abandons her because of it. Upset, Min-jung goes over to Yeon-seok’s house to sulk. When she arrives though, she pulls off — gasp! — an engagement ring. Not sure when that happened, but it seems that though things were serious with her boyfriend, they’re now over.

Min-jung conveniently drops the ring on the floor in Yeon-seok’s house, and he finds it a little later without her knowledge. He pockets it, realizing the situation. While cooking, he then asks her out, and she agrees. (Cue my squeals.) He dresses up and takes her to a fancy restaurant, and Min-jung seems to be having a really good time. 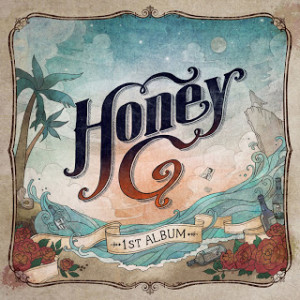 But just when everything is going perfectly, he tells her to close her eyes and puts the engagement ring back on her finger, and her boyfriend shows up while Yeon-seok exits the premises. It turns out that he set the whole thing up to reunite them. Thankfully, Min-jung realizes why he did it and chases after him.

This music video is much more of a drama and is perfectly sweet. I love the plot and all of the cuteness between Yeon-seok and Min-jung. What I enjoy most though is the cinematography and the seamless transitions between shots of the drama scenes and where Honey G is standing and singing. It’s gorgeous and subdued, which keeps the attention on the romance unfolding.

It all comes together wonderfully with the song, which is a more upbeat, soulful ballad about the foolish things a guy does when he’s in love. It’s a lovely song, and as usual, their voices work together beautifully. And while the music video does interpret the lyrics quite literally, it works because there’s actually a narrative, and it’s neither too sad nor too cute. It sits nicely in the middle, giving it a realistic feeling.

While the pre-release “My Love” doesn’t have as strong a music video as “You Fool,” the two are excellent tracks that display Honey G’s vocal talents. Both feature funky bass and fantastic instrumentals to back up the strong vocals and harmonies, making the songs different from mainstream but not radically so. The songs do an exceptional job of distinguishing Honey G’s style and talent from the rest, and I look forward to the group’s future releases.