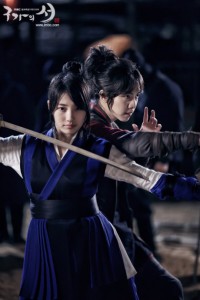 Watching Gu Family Book is like getting punched in the gut — in the very best way possible. The MBC sageuk drama has taken top ratings for its Monday-Tuesday slot, and after its first six heart-wrenching episodes shows no intention of slowing down. While it contains all the aspects audiences love in a sageuk, like sweeping scenery, sword fights and political intrigue, the most thrilling (and frustrating) element of Gu Family Book is the way the complex, emotional story grabs and squeezes your heart each and every episode.

The drama has already woven such a complicated story that a brief summary seems impossible. At its core, Gu Family Book tells the story of half-human, half-mythical gumiho Choi Kang-chi (Lee Seung-gi) and his search for the Gu Family Book, which holds the secret to becoming fully mortal. Abandoned at birth and taken in by prosperous inn-owner Park Mul-sol (Uhm Hyo-sup), Kang-chi grows up fiercely protective of his adoptive family, although his unknown origins make it clear he will never be the same class as them. Kang-chi meets Lady Dam Yeo-wool (Bae Suzy), a master martial artist and archer, who will play an integral part on his journey to self-discovery.

However, one of the strengths of the drama is that the main storyline doesn’t begin until episode three. The first two episodes take the time to fully explore the back story of Kang-chi’s parentage. Gu Wol-ryung (Choi Jin-hyuk) is a gumiho who falls in love with human Yoon Seo-hwa (Lee Yeon-hee). Seo-hwa was a noblewoman, until Jo Gwan-woong (Lee Sung-jae), the evilest of all baddies, framed her father as a traitor. The viewer gets the entirety of Wol-ryung and Seo-hwa’s ill-fated, unrealized love story, making us root for them only to rip them out of our arms. Taking so much time for a back story that doesn’t involve the main stars is unusual for a drama, but it works to make the audience invested in the entire story of this extended family. It also puts the theme of fate front and center, especially when the present story mimics the past. The in-depth depiction of the past smartly elevates the back story to mythic proportions, giving this world its own history. 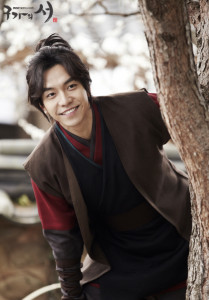 These first episodes work to build up this unique mythos within a mythos. For those who are unfamiliar, a gumiho is an ancient, mythical creature that in its natural form often looks like a demonic fox with nine tails. Numerous Korean movies and dramas depict gumihos, but Gu Family Book puts their own spin on a gumiho by introducing the rules to become human, and the repercussions for gumiho who attempt the switch and fail. This drama extends the malleable mythology of the gumiho, establishing their own rules. The drama has also employed beautiful visuals, like the use of blue lights to signal gumiho magic, to heighten its other-worldly quality. The graphics are impressive through the first few episodes, but the show might be hard-pressed continue them during the live-shoot episodes.

One cannot ignore the two leads and the depth they bring to their characters. As expected, Lee Seung-gi does well at making Kang-chi impetuous yet lovable, and he also manages to bring out Kang-chi’s inherent duality. While Kang-chi doesn’t know of his gumiho origins, Seung-gi creates a character that stands apart from everyone else. Kang-chi is characterized by this duality; not only in the gumiho/human way, but also in discrepancy of social class between him and his family. Despite Kang-chi’s unflappable nature, Seung-gi subtly shows moments of loneliness and pain, although more of those insights into his inner nature would have been appreciated. Through Kang-chi, the audience gets all of show’s themes — fate, myth, the supernatural — represented in one character. 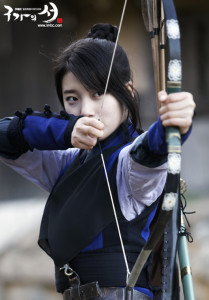 Suzy as Yeo-wool gives the audience a lady worthy of adoration, as she is perhaps the most capable and mysterious character so far. In fact, Seung-gi and Suzy’s roles are almost reversed in terms of gender characterization seen in a lot of dramas. Kang-chi wears his heart on his sleeve and has a lovable — if not always sound — stubbornness that many female leads exhibit. Suzy plays a smart, reserved warrior, seen in many male characters, and she is even mistaken for a man by Kang-chi. In order to get the audience rooting for them as a couple, the audience learns quickly of Yeo-wool’s past encounter with Kang-chi. However, these are the only details of her past we have so far. What Suzy does show us is an outwardly confident woman, who is inwardly lonely, setting up a nice parallel to Kang-chi’s character.

The show is not without its flaws, however. Every episode runs full-tilt with high stakes situations, turning the melodrama dial up to 11. So far, this has worked for the story because there are many tragic characters and relationships to set up before the gumiho-discovery takes over. However, I question whether the show can maintain this pace without reprieve. Episode six became a little ridiculous with the amount of deaths and noble sacrifices it racked up, making them feel unnecessary. The comedic, slapstick moments with Kang-chi, Yeo-wool and Gon (Yeo-wool’s sidekick played by Sung Joon) are hilarious, but they are too few and far between. Eventually the drama will need a fairly light episode, otherwise both the cast and audience will burn out. 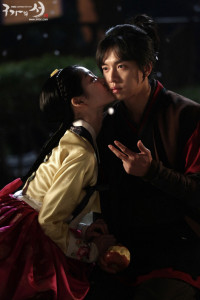 There is also a bit of the fauxcest we saw in That Winter, The Wind Blows, between Kang-chi and Chung-jo (Lee Yoo-bi), Lord Park’s daughter. They were raised like siblings, but now have romantic feelings for each other. Of course, everyone knows they are not brother and sister, but they often express such a chaste, sibling-like tenderness, it makes their romantic relationship confusing and awkward. As for the main pairing, it is questionable as to why it is necessary for Kang-chi believe Yeo-wool is a man. The show touches on a familiar cross-dressing trope, but does so half-heartedly. There is no active concealment of Yeo-wool’s gender; Kang-chi is merely making a mistake. The many people who know Yeo-wool is a woman don’t seem to react badly to her. In fact, portraying Chung-jo’s restricted life does more to bring gender issues to the surface than Yeo-wool being mistaken for a man. However, this could be remedied as the audience learns more about Yeo-wool’s character. My prediction is that Yeo-wool’s reveal to Kang-chi will be a hilarious, yet missed opportunity for deeper character development, but Gu Family Book could surprise me.

The world-building is a double-edged sword in the drama; it is fantastic they’ve taken their time to set it up, but now the pacing of information distribution is getting slow. As intriguing as the gumiho world is, there are confusing details about it. The rules are expansive but not clear, and structurally it’s time for prophetic monk So-jung (Kim Hee-wan) to spill the beans on the details. Per usual, there are many flashbacks to keep the audience up-to-speed from week-to-week, but they boarder on too many even for a drama. If some were taken out and that space used to coax out more details of the world, it would help with the clarity. However, these details will surely be addressed in the coming week, or else the writers have some explaining to do. 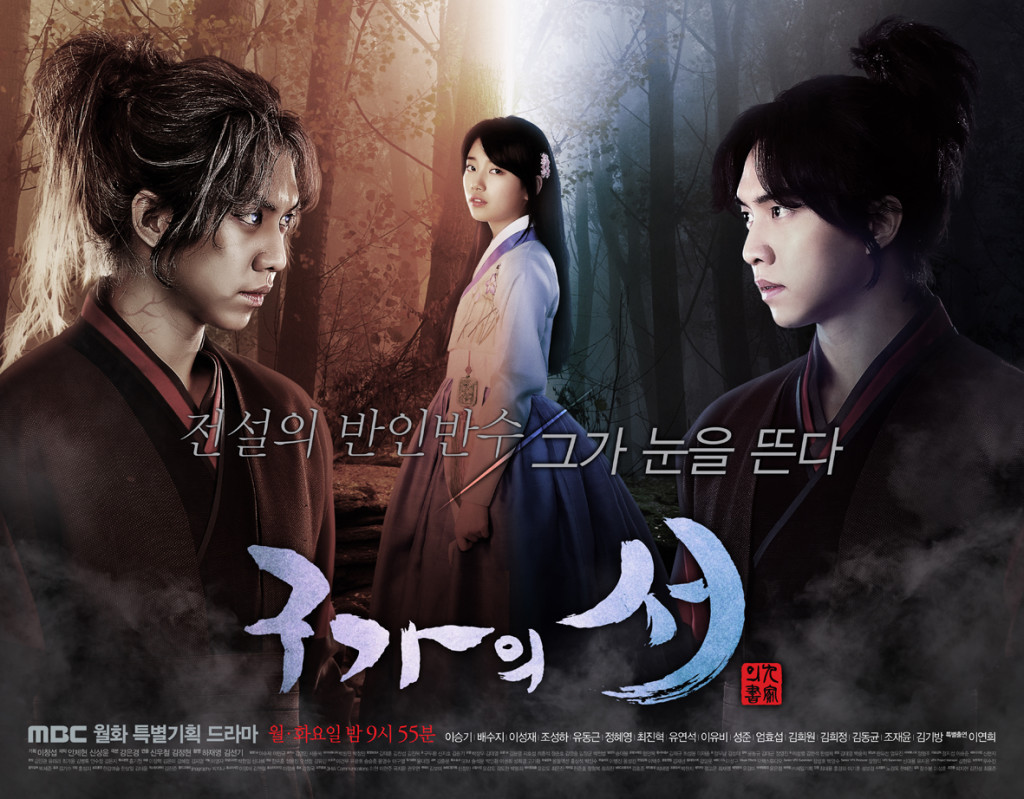 One more note: While I do love pure evil baddies, villain Jo Gwan-woong is so two-dimensional in light of the other characters that he feels off-balance. However, Lee Sung-jae does it so well that I’m ready to throw criticism out the window and start a betting pool as to which character will get the pleasure of killing him in the end.

There are so many more strengths in this show — the Park family structure, conversations of class, ninjas — and our main character hasn’t even heard of the Gu Family Book yet! I’m ready to take the emotional roller coaster again this week to see how it unfolds. Readers, are you watching Gu Family Book? What have been your favorite moments?