G-Dragon Is a Rebel Without a Cause in "Crooked" 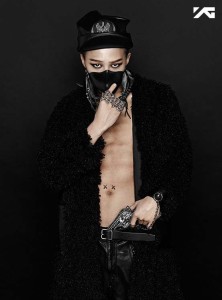 Nevermind the Buzzcocks! G-Dragon has taken up the punk mantle for “Crooked,” the second single from his highly-anticipated new release, Coup D’Etat. Boasting an illustrious lineup of collaborators, including Missy Elliot, Diplo and Baueer, Lydia Paek, and Sky Ferreira, the genre-bending album got off to a promising start with the title track, a dark and dirty hip-hop banger, and declarative statement of the “One of a Kind” singer’s Pinky and the Brain-like aspirations: world domination. Two days later, the BIG BANG leader is no longer beez in the trap, as he was for “Coup D’Etat.” With “Crooked,” he offers up a synth-heavy pop-punk anthem of nihilism in the wake of love lost.

Similar to BIG BANG’s pop-rock sleeper, “Stupid Liar” from the Tonight EP, “Crooked” is simplistic and infectious, displays the remarkable capacity of pop music done well to breathe new life into stock emotional concepts and basic musical structures. Sounding like something P!nk would screech through, or even better yet, a hit from Mexican electro-pop masters, Belanova, the track opens with an angelic synth riff that morphs into a distorted, klaxon-like call for the beat to drop. In come the thumping, disco-inspired, dance percussion, and a classic, uncomplicated 8-bar rock melody. The verse sees strident electric guitar recede to strumming that unassumingly guides the song as G-Dragon rap-sings his lament and resentment in a delivery full of bratty arrogance belying the pain expressed by the lyrics. The minimalism of the melody drives the song, seemingly propelling it to warp speed, as the track ends after three minutes and 46 seconds that seem like the blink of an eye.

For the MV, G-Dragon leaves behind the kaleidoscopic flights of fantasy and symbolism-laden imagery for a raucous, realist, punk-rock romp through the streets of London. But behind all the chaos lies a deep pathos, making our protagonist out to be quite the antihero. Fresh out of effs to give about propriety, the lovelorn rapper thrashes his way through an extended (and fashionable) attempt to forget the pain of heartache, only to have it catch up to him in the end. The video opens in pursuit of G-Dragon as he makes his way through the city, cutting a lonely figure. Throughout the MV, the perspective of the viewer seems to be that of the feelings he’s avoiding. Sometimes he’s walking, shoulders heavy with emotional burden. Sometimes he’s running away, looking back to see if he’s being followed. Other times he confronts the camera angrily. In moments of action (read: mischief), he ignores the camera completely—trouble being the perfect distraction from sorrow. 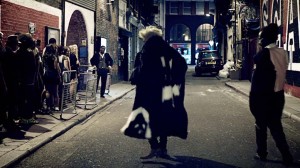 Once the beat drops, the imagery moves at an almost manic pace. Cut to G-Dragon out partying and drinking at the crib with his homies. Next, clearly forgetting the adage “don’t start none, won’t be none,” he bothers a young couple with the misfortune of crossing his path, bumping into them, then roughing up the man after deciding flirting with the woman in front of her boyfriend would be a good idea. In other scenes, he gets into a scuffle with a bouncer after being refused admittance to a club while wearing a floor-length fur coat bearing the image of a smiley distorted smiley face looking like it had been applied using Homer Simpson’s makeup gun. 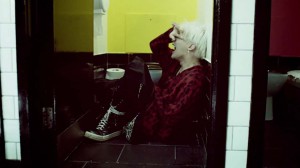 Next, he and his homies turn up to ruin lunch, invading an outdoor eating area, jumping on tables, kicking plates, and wreaking general havoc. G-Dragon channels his inner Kenickie from Grease, wearing a leather jacket and pompadour. In another scene, he disturbs a band busking on the street. Cut to more partying, more solitary raging. In the last 30 seconds, his broken heart gets the better of him. He finally breaks down, sobbing in a bathroom stall and while running down the street. The sadness and chaos come to an abrupt end, much like the song itself, as G-Dragon passes out in the middle of the dance floor. It’s in this moment that you finally understand why your high school boyfriend ended up in juvie after you broke up. Sometimes, people just can’t handle their feels. 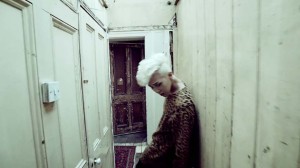 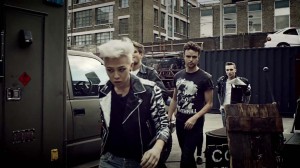 As with any G-Dragon output, worth note are the fashions. He delved deep into punk with this effort, but what’s really cool is that he called upon various eras of punk. In his Kenickie-inspired getup, he embodies Ramones and Blondie era, performing at CBGB, Bleecker Street style. In his look with the Sex Pistols t-shirt, ripped jeans, chains, and pompa-hawk (half pompadour, half Mohawk), he works it ‘70’s London style, looking like a friend of Siouxie Sioux. In his scenes at the hair salon cutely names “Pimps and Pinups,” his Herman Munster platforms, stovepipe pants, and slicked hair allow him to personify the intersection of punk and rockabilly. The saggy jeans with t-shirt and knit cap are reminiscent of ‘90’s pop-punk groups like Rancid. The floor length fur is representative of that transition time between glam and punk rock. And, finally, you have a modern punk look with the leopard-print sweater.

G-Dragon may be a hot mess in “Crooked,” but the song and MV are anything but. While not as thought-provoking as “Coup D’Etat,” the emotional sentiments in the song ring true. It sucks to have your heart broken. While some of us may drown our sorrows in a pint of Ben & Jerry’s, others act out. There’s no crime in that…well, sometimes there is, but still. The MV is beautifully appropriate and somehow manages to make G-Dragon sympathetic, despite all the chaos he causes. This is a great effort. 4.5/5