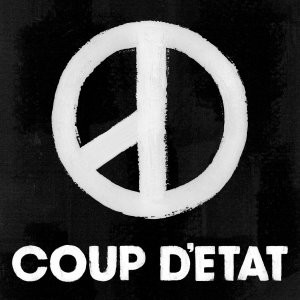 Gil Scott Heron’s powerful voice announces “the Revolution will not be televised,” while the camera pans on an apparent wasteland. A humanoid creature struggles to emerge from the dust, a Heron-inspired voice yells that “the revolution is here,” and G-Dragon, standing in the center of a Zion-like structure as if to address its denizens, begins, “This is my coup d’etat . . .” With that, the music video for G-Dragon’s “COUP D’ETAT,” the title single from his new album and apparently his first shot at a global takeover, begins. It is a vivid three minute, twenty-two second journey to the the shadowy side of G-Dragon’s visual imagination.

With the help of American collaborators Diplo and Baauer, G-Dragon steps away from the hyper sound of “Crayon” and “Michi Go” to explore a darker sound. At this stage, no one would be surprised if G-Dragon had been listening to Nine Inch Nails, and given his prolific artistic interests, it probably would be surprising if he hasn’t been for years. But lest anyone worry that he has stepped away from his hip-hop roots, one listen to the lyrics, and it’s clear that G-Dragon knows where he came from. And it seems that, now, he knows what he’s about.

The first splash of color besides blacks, greys, beiges and whites is femme figurines dressed and blindfolded in blood red, dancing beside lifeless trees. G-Dragon raps, “I’m so fly, I’m scary F-Killa/ Gorilla that steals girls’ hearts,” as he steps in front of the helpless creatures, the area over his heart blood stained, although his white shirt remains intact. Immediately afterward, he says, “Bang bang bang,” while looking us in the eye. This is the first opportunity to check out his face and hair style choices. The face is pale; the eyeliner is heavy. The hair is white and black.

This level of attention to detail is not unusual; extreme attention to the little things is G-Dragon’s modus operandi. Even so, in this music video it feels like it’s been taken to a whole new level. The artist wants his message to be multidimensional and total so that the audience is not just entertained but is also forced to reckon with the message he’s trying to send.

It’s easy to say that the video represents a critique of the Cult of Celebrity. We see that in the repetition of the telegraph/radio scene from the music video for “Crayon,” this time with shadows in the background trying to get into the booth with G-Dragon, who continues to deliver his lines with a stone cold look on his face. This is also where the lyrics really start to take off. He brags, “I earn money with my teeth/ With my one song.” Even so, the look on his face says that he’s immune to the demands of the crowd now. He knows they’re back there, and he thinks he can do what he wants and the crowd will eat it up. Looking at how the new album is charting, he’s not wrong, at least not right now. 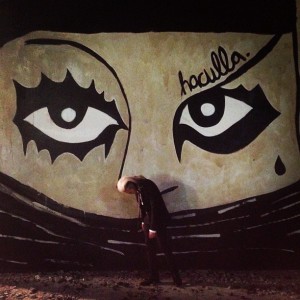 But he doesn’t stop there. This is his coup d’etat, his takeover, after all. After appearing to be cracking under the weight of all he carries, G-Dragon begins to transform. He straightens out his tie and then he appears in a ski mask, standing in front of the artistic works of New York-based muralist, Harif Guzman, who created them specially for G-Dragon’s production. However, the transformation is incomplete, and G-Dragon finds himself stuck on a table, surrounded by blindfolded women holding microphones and cameras. They are confusedly trying to get something, anything from their subject, who they can’t quite see.

It is at this point that we see all of the white masks from G-Dragon’s Hearbreaker era, and they are crying black tears. Something inside is trapped and trying to break out. Removing one white mask from his face, a shadow GD is revealed. It is certain that at least one viewer was relieved to find that the “blackface incident” of last month was in fact not intended to be blackface. That said, the impact of the visual is not so paramount that it was worth the secrecy that YG and G-Dragon insisted on maintaining. Nonetheless, in context of the rest of the video, the image represents the apex of G-Dragon’s experience of trying to live his dreams in a world that has its own ideas about him.

From that point on, there is nothing to do but break out, and that is exactly what the struggling humanoid from the beginning starts to do. Viewers may recognize that the humanoid shares G-Dragon’s tattoos. He begins to tear off his skin, revealing the true human underneath. This is him, rising up, throwing a rock at any barrier placed in front of him, tearing it down, being born anew, ready to take over if it’s necessary. Message received: the path to success is not straight forward, and G-Dragon will do whatever it takes to be the artist that he envisions, even if it requires a coup d’etat. He ends the video as a red ninja, red flags flying behind him, giving the audience a look that says he will be taking no prisoners.

Much has been made about what the next big western crossover from K-pop will be. If you’ve watched this music video, then you’ve probably seen it. Neither this song, nor this video in particular, are going to be the next “Gangnam Style,” but going crazy viral is not the only way to cross over. Instead, this track is part of an album long assault at a grassroots level. Diplo and Baauer fans will be taking note and so will fans of Missy Elliott, who appears elsewhere on the album. Old school hip-hop heads will recognize the shout out in “Coup” to Snoop Dogg (OK, Snoop Lion), an artist who is part of the rap canon. G-Dragon’s coup isn’t just about artistic control in his own life. He’s coming for us. For our ears, and our eyes. He’s delivering the truth. As he says, “This is a gospel,” and it’s our job to say, “AMEN.”