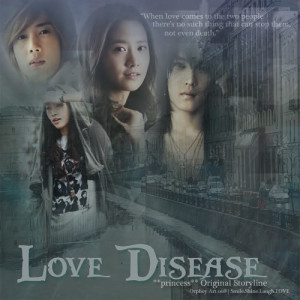 Let’s get the stereotypes out of the way. If you’re not an active participant of the community, what do you think of when someone says K-pop fanfiction? Smut? Slash? Cliches? Though there’s some truth to these, it’s sad that the debate surrounding these issues overshadows the other reasons why people write and enjoy K-pop fiction, and the benefits for them in doing so.

Why do writers write K-pop fiction? It’s a question so simply put you might wonder why I’m asking it. They enjoy it, you say. And yes, they do. They enjoy it like they enjoy looking at pictures on Tumblr, like they like fancams on YouTube. It’s all part of the process of enjoying media related to your favorite idol.

But fanfiction has an additional component to it. It is very heavily geared towards producing even more content. Not to say that Tumblr and Youtube users don’t, but the very nature of fanfiction itself is productive. In this production, the formation of a community is also formed, as readers comment and writers become inspired to write more and get better in their writing. Implicit in this community is lots and lots of discussion and critical reflection on idols, places, issues, much more so than people give fanfiction credit for.

Let’s look at EXO as an example of an emerging fanfiction community. As a new group, EXO has been heavily promoted by SM Entertainment, appearing on all sorts of variety shows, music programs and more. Facts about EXO are appearing every day, from what Suho told the members on Sukira to Tao appearing in Star Diving Show Splash. So these facts end up winding their way into stories that people write about these members. 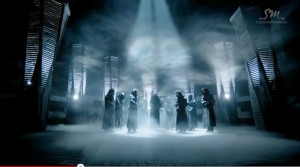 Through cyberspace, this is the fan’s way of reacting to news about idols and integrating it into fandom knowledge, by writing fics that other fans will read about it. At its best, it is an online fiction community. Here, people generate ideas for stories, called prompts, and anonymous writers fill them in. Some are linked to recent happenings, such as Heechul declaring that he wants to marry Xiumin.  Be warned: it’s most sexually explicit  in nature, and I’m not vouching for the quality of writing.  But it does enjoy a really high participation rate, with weekly writing rounds being held and with an average of three to five hundred comments per round.

Putting the issue of smut aside, the amount of knowledge required to write prompts like that is astonishing. Not bedroom knowledge, but rather the knowledge of what’s going on in the recent community, who said what and when, what the perceived character of an idol is, explorations into their fears and desires, explorations of group relationships, and much more. It actually does require quite an astute mind and a significant amount of attention to fandom, not to mention imagination, to write these prompts. Whether people notice it or not, this is the fruits of labor for months and months of watching YouTube, fancams, variety shows, CFs, Tumblr and whatever else the idol happens to be in, tumbling out in a handful of words to be passed around and shared. It’s a beautiful thing, if done correctly.

We should get something out of the way first, which is to ask whether it’s right to write Real Person Fiction (RPF), or smut. These have been both well-discussed before. The stand here is that as long as it’s not shoved into the idol’s face, and fans accept that it is purely fantasy, it’s really up to the individual what he or she wants to read or write. Also, there are some fics that aren’t geared towards shipping, and even in those that are, an exploration of group dynamics or character introspection are factors very important for well-written fiction. 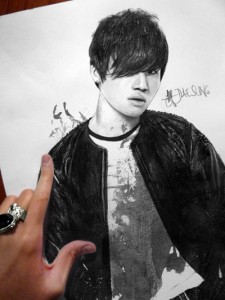 The key point is how much fanfiction communities pick up on and how they can end up reflecting general attitudes or observations towards idols, issues such as Kai’s skin colour, Xiumin’s weight, Suho as a leader, the troubles of promoting in a country with a language you don’t fully speak, the stress of idol life, amongst others. All these are things that fanfiction, like a huge amorphous beast, ingests into itself.

Fanfiction then becomes a way of negotiating a stand on the issue, and contributing to the general discussion on these topics. Fandoms other than EXO also exhibit these tendencies. The Big Bang fandom, for example, does discuss in stories things like Seungri’s sex scandals. GD’s stress level and unhealthy sleeping habits are also fair game, as is Daesung’s car accident and GD’s marijuana incident. Even if these issues aren’t explicitly discussed, they are embedded in stories, and are evidence of  an attentive fanbase that  has  the  capacity to  reflect and  discuss such  issues in  the form of fanfiction.

In fact, I’d go so far as to say that most major cultural phenomenon in media in this day and age will have their own fanfiction communities that spring up with them. Avengers, Supernatural, Batman, anyone? Beginning from the Star Trek fandom and including others such as the Buffy, Doctor Who, Highlander, Firefly fandom in the 1990s, the idea of online fan communities really took off with the internet age and the Harry Potter community. A huge part of Harry Potter’s success definitely goes to the humongous online fandoms that have propelled it to success, with several quality pieces of fanfiction being featured in places like the New York Times. These fandoms are changing the relationship between produced material and consumers. No longer a one-way street, these communities can become so large in size that they form a significant part of the fanbase. These communities make up an essential part of the experiences of people in the fandoms.

As always, fanfiction ranges from the absurd to the astute. Not all fanfiction aspires to be critical, well-thought out material, and that is perfectly fine. But the best fiction tends to be those that makes a conscious attempt to engage with what general perceived attitudes of a character is, and say something that will ring true about it. And isn’t that what people should do in life? Engage and critique? Why should fanfiction be perceived as lesser because of that?