Abs Are The New Thighs: Sexual Marketing of Male Minors 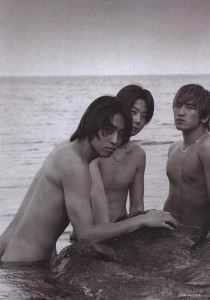 To say that K-pop is largely visual would be an understatement and hot guys showing off “the goods” is nothing new in K-pop. Depending on how long you’ve been following K-pop, you may be familiar with the infamous Shinhwa nude photo book, Rain’s shirtless dancing, or Lee Joon’s nipples. These notable examples are evidence that K-pop has always had a thing for a man with chiseled abdominal muscles. However, as the ladies skirts have gotten shorter so have the mens’ — or should I say boys’ –shirts become scarcer to the point that abs seem to be the new thighs. What is concerning is the increased frequency of ab-flashing and the gradual decline in age of the participants.

When a girl group comes out with a new sexy concept there are always people among the netizen community ready to condemn the stylists and demand a recall to more modest times. Similarly, there are articles and posts on a regular basis about the uncle fans and their somewhat questionable intentions. Among this hubbub about revealing clothing for young women, especially minors, there is nary a peep about the current revealing clothing trend among young male idols.

One defining factor in the above mentioned examples of iconic exposure, though, is that the idols involved were of legal age. Even better than that they were twenty or above, even going by international age. Although Shinhwa’s nude photo book is by far the most revealing, Rain is the idol most commonly thought of when it comes to actually performing on stage and at music shows with exposure. Joon followed in his mentor’s footsteps as far as that goes, but his first and most memorable shirtless music show episode was actually an accident which he got in trouble for later. 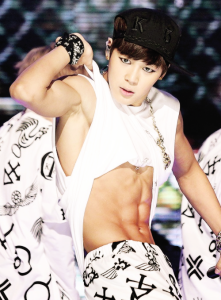 As time has gone on, and the industry has become more and more comfortable with revealing clothing, there has been the occasional shirtless MV from the boy groups. Besides “beast-dol” groups like 2PM and 2AM, however, it wasn’t common until recently to expect a whole group to have rock-hard, chiseled abs. Two such group-shirtless MV’s are Dalmation’s (DMTN) “E.R.” and 100%’s “Want U Back.” Both of these groups had been marketed with a more mature and manly image, along with having members with an older average age, so the use of a shirtless concept almost made sense for them as a “next step.” Neither of these groups used any exposure on music shows, either, keeping with the more modest trend for TV.

However, the times they are a-changing, and not necessarily for the better.

Within the last couple months there have been multiple male rookie groups going for the good ol’ ab-flash marketing strategy. One such group is Big Star, who had been residing in comfortable anonymity since debut, having not managed to put out a hit that would grab the public’s attention. For their recent single, however, they took it up a notch by adding a shirt-lift during the chorus dance during their music show stages. There is no reason for this other than the marketing benefit of having young (and older) women screaming their heads off. On the bright side, while Big Star is young, they aren’t the youngest group out there being used for this slightly underhanded advertising.

Speaking of blatant pandering to female fans for attention, rookie group BTS (or Bangtan Boys) have been capitalizing on that kind of attention since debut. Starting out with a single member flashing his abs on stage, and in their debut MV, they have since taken it up a notch by having all of the members flash their abs. The real kicker for BTS is that their average age is around seventeen–yes, I said seventeen. It doesn’t stop there though, because their youngest member at the time of the promotions for the “Bulletproof 2” intro was fifteen years old and front and center raising his shirt.

It is unclear why the Korean keyboard warriors for the rights of minors aren’t all over a fifteen year old male’s ab-flashing yet. We’ve discussed the gradual drop in age of idol trainees and what negative implications there may be in that, but the objectification of young boys seems to get mysteriously left out. While we often bring up uncle fans when it comes to talking about young idols, the noona fans seem to get forgotten. Noona fans, being female, are generally considered less of a threat than the male uncle fans, but a quick sweep of the internet, say tumblr., will quickly prove you wrong. Because of the way gender roles are set up in society, we are all programmed to disregard the possibility that men can just as easily be treated as sexual objects as women are, so it is allowed to go on unchallenged.

Believing that these young male idols aren’t being looked at sexually is naive and, frankly, sexist. It goes for both males and females, if you market an idol in a sexual way they will be viewed sexually, regardless of gender. As our writer Nabeela said in her insightful article on uncle fans, “Uncle fans may be responding to the charms of female pop idols, but aren’t K-entertainment agencies equally at fault for, well, establishing the female idol image and selling it to a public audience?” and it is about time we came to terms with the fact that this isn’t exclusive to marketing for male fans. 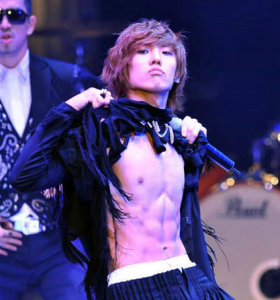 So much care is given to the discussion of female idols being forced to wear revealing clothing by their companies and yet we fail to consider the same thing for the male idols. Just as the female idols have to starve themselves to be skinny, the male idols have to diet and work out constantly to maintain a six-pack. Another worrying side effect of the ab-trend is that super defined muscles may become the expectation for all male idols like stick legs are for female idols. Not every guy can easily get, or maintain, a six-pack. I’d personally rather see a healthy idol over a particularly muscular one any day – and that goes for males and females.

More and more idols are coming out about the fact that they are starving themselves to reach the weight they are expected to be at by companies and fans alike. Xiumin of EXO and Youngjae of BAP are two such examples, and they haven’t even shown off their stomachs! When you’re fifteen it is easy to lose weight and put on muscle, but the older you get the more difficult maintaining that type of “ideal” body frame becomes. Even if we, as fans, tell these boys that we like them the way they are the use of six-pack flashing etc. in MVs and on TV is telling them something different. The constant exposure of more and more skin among male idols is only reinforcing the message that they should all be abnormally skinny and muscular.

EXO and BAP are both good examples, as well, of rookie groups that have made it to popularity without having to flash their abs in their first MV. They have earned their awards and fans by using their singing and dancing abilities on stage – not that their pretty faces didn’t help. It’s a hard industry, no doubt, but companies shouldn’t be resorting to marketing teenage boys sexually just to gain fans. The girl group industry has already become over-saturated with rookies with nothing more to offer than their legs and butt-shaking dances and it would be a real shame to see sexual marketing in the entertainment industry have the same effect on the boy groups. If a boy group wants to show a little extra fan service on stage after they have established themselves, fine, I’m all for it, but let’s keep the minors in their shirts for everyone’s sake.