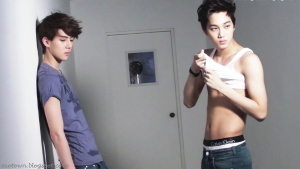 The idea that idol groups in South Korea often push the envelope in terms of what might be appropriate expressions of sexuality in music videos, songs, and performances isn’t exactly up for debate.  Whether or not we as fans choose to acknowledge it, K-pop content is often hypersexual, and purposefully so; contrary to what the current discourse regarding both the uncle and noona fan demographics would have one believe, older men and women are not following popular music intended for an adolescent audience simply because they are “proud” of boys and girls that they look upon affectionately as “nieces and nephews.”   Indeed (and again, this holds true whether or not one chooses to acknowledge it) the impressive visuals that often accompany K-pop songs and music videos are probably a large draw for most domestic and international fans of K-pop, and it can sometimes be difficult to separate the spectacle itself from the sexuality with which it is imbued.  While the Korean music industry more often than not uses this to its own advantage, it seems to (finally) have occurred to some higher-ups in the South Korean government that maybe this practice isn’t exactly kosher — especially if the artists and idols in question are not legally adults.

All that being said, it was announced a few days ago by the Korean Communication Standards Commission that an existing bill that currently prohibits minors under the age of 19 (the legal age in South Korea) from performing sexually suggestive scenes and wearing overly-revealing outfits will  be modified and made stricter in its regulations.  It was also revealed that the KCSC intends to pay more attention to program ratings and to punish networks that violate any of the bill’s stipulations.  Hilariously, a statement from the KCSC offered that the bill’s revisions would work to ensure that “children, teens and entertainers won’t be commercialized as sex objects in the media” as well as help promote “wholesome broadcast content that won’t be detrimental to the good of society at large.” 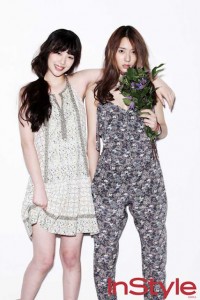 First of all, that this bill even exists in the first place — and that the KCSC has seen fit to revise it — speaks to the facts that  (1) people in South Korea were already aware that there is a problem with the way that minors have been represented in the K-pop industry, (2) that said people have been overlooking an outrageous amount of offense, and (3) that the bill hasn’t been terribly effectual in preventing the objectification of minors thus far.  And really, is anyone surprised?  Given how easily South Korean entertainment companies are able to buy off media outlets (example: Core Contents Media‘s relationship with Newsen), their somehow getting away with having 15-year-olds revealing their red bras and gyrating on stage in spite of “legal protection” for minors doesn’t even register as shocking.  But that is neither here nor there.  The true question is whether or not this newly-revised bill has any sort of bite to it and will be able to effect actual change in the industry.

And I’m sure that I will surprise approximately no one by putting forth the idea that no, it will not change a damn thing.

The first question I have about this bill deals with exact specifications.  In other words, where is the line and how close can entertainment companies come to crossing it before getting slapped with a ban or a fine?  How short can Chocolat‘s Tia‘s shorts be?  How sexy of a dance is too sexy for f(x)‘s Sulli to be performing on stage?  What about groups comprised of both underage members and 19+ adults?  What happens when choreography and outfits aren’t the crux of problem, but rather manipulated to seem that way as a result of potentially perverse camera angles?  And really, is there any way to actually and objectively set these sorts of standards?  Is the KCSC actually planning to come out with an enumerated list of what dance moves and articles of clothing will get entertainment companies in trouble, or will certain cases wind up being subjectively decided?

Given how erratically we have seen the Ministry of Gender, Equality, and Family wield their mighty banhammer over the course of the past few years, it is probably fair to say that without a specific set of provisions (which, realistically, will likely be utterly impossible to write or codify), the KCSC bill will wind up being effectively toothless and unfair — and unsurprisingly, will probably disproportionately affect girl groups far more than it will affect boy groups.  From a certain perspective, this is understandable; perhaps the obvious sexualization of young women in K-pop is far more obvious and potentially dangerous than is the obvious sexualization of young me, particularly given that the “uncle fan” phenomenon has earned a lot more attention and suspicion than has the contribution of older women to fandoms (though this, too, is of course subject to debate); however, unequal enforcement of a law on the books is just that: unequal and unfair.  While there are definitely elements of girl group performances that one could easily point to as crossing the line, one cannot be gender-blind.  Chocolat’s choreography for “One More Day” was not or should not be significantly more offensive from the KCSC’s perspective than was, for example, BAP‘s choreography for “No Mercy” or certain elements of EXO-K and EXO-M‘s choreography for “MAMA” — but I can easily envision a scenario in which the KCSC’s stipulations are only selectively applied to girl groups. 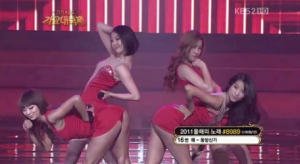 Additionally, even if the bill doesn’t wind up being totally toothless, I don’t really understand how preventing minors from being uber-sexual on stage is going to contribute to more “wholesome” broadcasting — I mean, hasn’t anyone from the KCSC noticed that minors in idol groups are hardly the only offenders?  Stopping minors from bringing an avalanche of sexy to television isn’t necessarily going to stop groups that are legally permitted to employ sexually suggestive content from doing so — and I find it difficult to believe that trying to control for violations by foisting certain programs with (equally subjective and difficult to implement) ratings restrictions will serve as much of a deterrent.  An increasingly large number of companies — many of which are well-established and enormously powerful — create content for networks to broadcast, and attempting to force these networks to adhere to a bunch of subjective and unclear provisions will seriously curb creative content and create a much larger problem in terms of enforcement.

I suppose someone should give the KCSC a cookie for recognizing that the sexualization and objectification of minors is not a great thing, but they deserve very little praise for coming up with what seems to be a poorly-thought-out and impossible-to-execute solution.  It is still unclear what the best way to go about fixing what might prove to be a very difficult problem will be, but a more heavy-handed approach seems like a pre-requisite.

Seoulmates, what do you think of KCSC’s latest actions?  Will they be effectual?