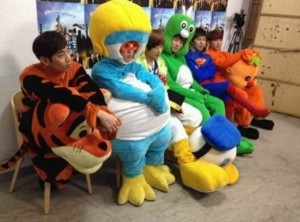 The next stop on 5 Things’ 2nd Anniversary festivities is all about variety, K-varieties.  Korean variety shows are huge and can make or break a Korean celebrities’ career.  On the bright side, a celebrity’s participation in variety shows can boost their popularity and be very beneficial to their career as it encourages a familiarity with fans letting them get to know their fave celebrity a little bit better.  On the dark side, it takes up a lot of time giving these celebrities an even more jam-packed schedule and that same familiarity, which can be a good thing, can also be a double edged sword as some fans think their relationship to their celebrity is much closer than it really is.  Fame doesn’t come cheap.

But on to the bright side of Korean varieties– they’re tons of fun and provide some much needed entertainment to weary workers and students.  Here are ummm–5, yeah 5, of my top K-variety moments from the past year of 5 Things I LOVED in K-pop.

You don’t have to be K-variety obsessed like me to know that Lee Hyun beats just about everyone in ssireum, even beasts like Taec.  So, it was totally shocking to see Seo In-guk, the Superstar K year one winner take out Lee Hyun in the final round of Let’s Go Dream Team 2‘s ssireum championship round.  Perhaps Lee Hyun was too tired from the many matches before or perhaps it was the overwhelming presence of Seo’s fans, but regardless, it’s a match you should watch!

Who knew the ajusshis of Shinhwa would be so funny?  I saw glimpses of it when Jun Jin was on Family Outing, but wow this is becoming a habit.  As a continuation of their “special” Olympics, the men participated in making funny faces and ‘facing,’ which is better left for you to watch than for me to try and explain it.  Here’s the championship match between Shin Hye-sung and Andy, but make sure you’re not watching with a full bladder or you just might pee your pants.

On the last episode of We Got Married, Eun-jung‘s hubby actor Lee Jang-woo tries to help around the house by cleaning up and also gets tasked with washing their bed comforter.  Unfortunately, Jang-woo didn’t know to remove the filling in the comforter before attempting to wash it and words can not describe what happens next.  Moms, this is why you should let your kids do chores around the house.  I don’t think there was any winner in this battle as both Jang-woo and the comforter look beat up.

I’m sure it would have be even funnier with subs (found the subs), but I enjoyed Saturday Night Live Korea Season 2‘s episode featuring the boys of Super Junior.  They left almost no idol related subject untouched and weren’t half bad at acting either. I especially enjoyed the skit where Eunhyuk, Kyuhyun, Shindong, and Leeteuk talk crap about each other behind their backs.

I know it’s scripted and they all rehearsed what stories they were going to tell, but still… it was Fantastic Baby!  It was an enjoyable episode of Strong Heart and I’m glad it was done as Lee Seung-gi‘s last show.  Lastly, I predict a bunch of Se7en–T.O.P. fanfics coming out in the near future…

If you read 5 Things at all you must have known that this was a given. Honestly it wasn’t the best episode of Running Man I’ve ever seen–there have been better due to better locations, games, etc., but I stilled LOVED it. And maybe I stayed up until 3:00 am HST Sunday to watch it as soon as possible. It was funny from the very beginning with the Running Men making their big entrance riding in on SUVs in their all black ensembeles and then getting upstaged by Big Bang arriving in helicopters wearing red, to Taeyang being so excited to play he runs off by himself and then rips off the staff member’s tag, T.O.P. wanting to follow Daesung around because he doesn’t know how to play the game, G-Dragon getting found almost immediately by Haha and Song Ji-hyo and then being let off, and Seungri getting taken out first because of his “Lies.” Ah, it’s good to have Big Bang back in the K-popiverse.

1.3.  Are these guys just spectators?

It’s part two of Running Man in Hong Kong with guests Lee Min-jung and Jung Yong-hwa.  It was every man or woman for themself as they tried to track down ‘the one.’  Here’s a hilarious clip of Yong-hwa trying to take down Kim Jong-kook with the help of Lee Kwang-soo–you can imagine how that went.  What made it more hilarious was the reaction of all the ajusshis, namely Yoo Jae-suk, Ji Suk-jin, Haha, and Gary.  You gotta give Yong-hwa credit, he is one of the few men I’ve ever seen take on Sparta-kooks.

Veteran actor Choi Min-soo returns for revenge on Yoo Jae-suk who sneakily took him out in his first appearance on Running Man back in July–so, it’s Grasshopper Hunting Season.  All the cast, except Jae-suk get taken hostage so Jae-suk needs to find and save all the members and escape from the Incheon Culture and Arts Center to win.  Grasshoppers must have four lives, because that’s how many chances Jae-suk gets to escape from Min-soo.  In the end, it was down to the last life, last lost running man, and last chance for Jae-suk to be triumphant again.

Korean Soccer superstar Park Ji-sung was the guest star on Running Man and I can honestly say it was one of the funniest Running Man episodes I’ve seen. They say it’s the first time that Park Ji-sung was on a reality show and I don’t know why– he was freaking hilarious and so cute!  Of course they played some soccer and he was classic when choosing a teammate for a 2 vs 7 match.  Those odds seemed pretty even to me, but it seemed as though the PDs didn’t think that would be fair and gave everyone “special powers” which was too funny to believe and had me thinking “Shaolin Soccer?”  The whole episode is a must see and I look forward to next week’s episode when Ji-sung will be joined by a couple of friends.

Those were some of my favorite moments in K-variety this year, were they yours?