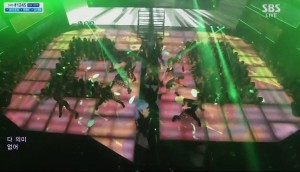 Time sure does fly when you’re a K-pop fans and thing are good in the K-popiverse. K-dramas are good–have I mentioned Two Weeks, Good Doctor, Master’s Sun, and Who Are You–enough, K-pop is good and K-variety is good.  Need I mention new Big Bang release before the end of the year?  K-pop life is good.

The following are the top 5 Things that happened in K-pop this past week that I thought were a bit more special than the rest.  If you are not up-to-date on all your K-pop and tend to not like your surprises spoiled… turn back now or forever hold your peace.

What has Running Man done to our G-Dragon?! The latest episode of Running Man with the Big Bang leader as well as Seungri and Daesung. I was a little disappointed as I had hoped to see much of Daesung’s epic K-variety skills, but he didn’t have a lot of those moments. It was still a lot of good clean–uh, I mean dirty fun.

Kim Jong-kook released the song  “How Come You Don’t Know” for the OST of the K-drama Good Doctor. The MV shows scenes from the drama depicting the growing once sided (?) love of Joo Won’s character in the show, Park Shi-on, who is a man who suffers from savant syndrome and Autism who is struggling to overcome his disabilities to become a pediatric surgeon to keep his promise to his older brother. Love it! The song, the MV and the drama.

The past two episodes of 1N2D was a ‘Friendship Special’ where each member brought along three of their closest friends, some celebrities–some not, and had a blast playing games, eating, and spending some quality time together in true 1N2D style. Here’a clip of  Sung Si-kyung and his friends Jo Tae-joon, Shim Hyun-bo, Moon Chun-shik performing a song  for their talent show mission–which was a bit unfair as three of them are musicians with one an actor that can sing, too. Some of the other groups really put their reputations on the line with some of the skits they came up with for the talent show–but I couldn’t find any clips out there.  So go look up the episodes in all of your fave places or you can wait three weeks until KBS World puts it on their YouTube channel.

This drama is SO GOOD!  It’s funny that a lot of the plot lines in this drama are parallel to those in the other current “I see dead people” drama, Who Are You, but the acting and tighter story is definitely what sets it a part. And no, the one that loves more DOES NOT HAVE TO DIE! Stupid sad fairy tales….

If you haven’t already seen Cho Yong-pil‘s latest MV for the song “Romance” (even though I’ve already wrote about it recently), you really must watch this now.  The MV stars popular child CF models/actors Moon Mason and Aleyna Yilmaz (both of whom also appeared in different seasons of the K-variety show Hello Baby–Mason appeared with in T-ara‘s season with his two brothers and Aleyna was one of the children in Boyfriend‘s season of the show.  The tale of a little ‘romance’ is shown in the MV which is shot in an E-mart Traders location and depicts the magical beginning of a fairy tale love story.  The CG effects they used added just enough whimsy to add to the fairy tale romance.  It is just too cute!  And we all need a little spark of romance in our lives from time to time, right?!