The Bangtan Boys Ask Us To Say "N.O."

It’s been three months since their debut and Bangtan Boys (also known as BTS or Bulletproof Boy Scouts) are back with “N.O.” The hip-hop influenced septet debuted earlier this July under Big Hit Entertainment, a subsidiary of JYP Entertainment, which manages GLAM and 2AM.

Upon their debut with “No More Dream,” the group drew comparison to two other hip-hop influenced idol groups: B.A.P and Block B. Like those two groups, Bangtan has quite a few roots in the underground hip hop scene prior to debut. Leader Rap Monster was known as Runch Randa and Suga was active as a composer and producer for his crew until 2011. It is these two and J-Hope that compose and write the lyrics to most of their songs, from their first mini-album, 2 Cool 4 Skool, to the songs off their latest release, O, RUL8 2? (Oh? Are You Late Too?).

Seeing as “No More Dream” — while the MV and overall song might have been seen as contrived (must be those 22 times they rearranged the song) —  was a song that spoke about a societal issue not tackled in K-pop before, I was excited to see if the group would continue such lyrics. It spoke about how the youth today had, well, no more dream of their own and had resigned themselves to studying to become what their parents want them to be – a lawyer, doctor or government employee being popular choices. So going into the MV, the main question in my mind was: will the group deviate from giving students a voice?

For “N.O,” we first need to talk about the visual presented in the music video. It is set in a dystopian-like setting where the activities of students are watched intensely. In fact, to make sure nothing goes amok, students are given this red pill. What does it do? One can only guess but it seems that it is meant to subdue the desires of students. It is used to regulate their minds so that they will focus and take in what their teacher is saying. The math equations are then, through the technology of this dystopian world, transferred to their pristine white desks in red ink. Another flash of equations on the desk and then we see a close up to Jung-kook clenching his fist.

And that is where things take a turn. 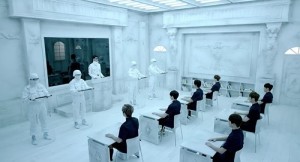 The red pill doesn’t achieve the desired effect, and the teacher knows it — we can see that flinch of terror in his eyes. The boys wake up from their controlled state and attack the reason they’ve been turned into machine-like students. Angered by what has been done to them, they get up and clash with the riot police protecting the teacher. Another flash happens and they succeed, knocking the guards down and leaving the teacher cowering behind his podium as Bangtan leave the room.

This is where the first half of the MV comes to a close. This half gives the viewer a lot to think about due to the amount of symbolism present.

My interpretation is that this half all relates to the importance of education ingrained into students by the society. The red pill represents the will of their parents overpowering the individual wants of the student, which I will talk more on a bit later. And even when one overcomes this, the society (in the form of the riot police) takes over and pushes you down. The identifiers of a successful person is a societal construct, it all depends on that society. And in Seoul? You are successful if you have gone to a top university, graduated with high grades, work a job approved of by the society (a doctor, lawyer and government worker being examples), and earn money. The difference is that this MV shows that Bangtan has overcome this for they have pushed societal expectations down to debut despite their young age with music they are proud of.

It is at this point that the members walk out of the classroom and appear once more…in Nirvana? They walk down steps to a general area where they appeal to the camera as female play their string instruments. Why only females? It seems that there’s no real reason except it looks good on camera. 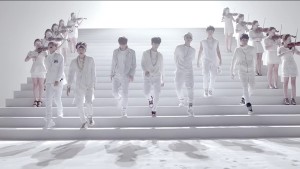 During the second half, we get more of the choreography we only get a glimpse at during the dystopian half. The choreography also plays on the meaning of the song. There are machine-like movements and at one point, the boys do form a machine with their bodies. This underlines the machine-like nature of education in South Korea. Unusual for a K-pop song, it ends with a dance break. The boys are battling yet another riot squad, but they dance their way to victory.

Lyrics-wise, this seems to be a sequel to “No More Dream.” Whereas their debut song tackled the social issue in Korea where students do nothing but study and thus leaving no room to dream for themselves, “N.O” goes further and gives reason as to why this is a problem.

It’s a cycle of school, home or an Internet cafe

Everyone lives the same life

Who is the one who made us into studying machines?

They classify us either being number one or dropping out

There’s no conversation topics beside studying

Outside, there are so many kids like me, living the life of a puppet

This MV and song is framed as the time for university entrance exams approach in South Korea. “In Seoul to the SKY, will parents really be happy?” is an interesting line. While it can mean the sky as in the sky above us, it most likely is an acronym for the three most prestigious universities in South Korea — Seoul University, Korea University and Yonsei University. Due to the caliber of graduates and the alumni spread throughout not just South Korea but the world, it is said that you set for life if you graduated from one of these three universities.

The lead up to this test is pressure at its finest. Aside from going to classes in a normal school, families also usually spend up to 16% of their income on sending a child to a hagwon or private cram school after these classes. In 2010, 74% of students went to one of these hagwons. And once these classes are done, the student would then go home and study some more. The importance of money and achievement is so ingrained in society that students who fail a test feel that they have failed their parents. In the lead up to the national exams, it is usual to hear of news of a student committing suicide if not because of failing a test but because of the sheer amount of pressure on their shoulders. It’s so bad that there are hagwon crackdowns. 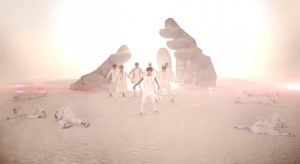 That the boys are further highlighting this issue with their latest release deserves applause. One can even say that “N.O.” goes hand in hand with “No More Dream” — where the latter has described a culture wherein the youth are not capable of dreaming because of the education culture in Korea, this time around, the Bangtan Boys are asking the students to stand up for themselves and say no to this culture and realize their own dream.

This message is presented not just in song but in the dystopian setting of the MV itself. I would have liked this setting highlighted even further rather than get them coming down a flight of stairs and taking on a SWAT team with their dance moves, but for all intent and purpose, the message is there. Unlike “No More Dream” where the song meaning did not resonate in the MV, this MV worked with the song to heighten the experience and for that, I give this MV a 4 out of 5.