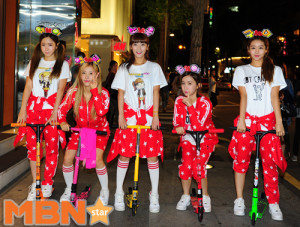 Crayon Pop’s original “Bar Bar Bar” has inspired a lot of strong opinions. Here on Seoulbeats, Nick called their music video “rambunctious,” noting that “the song takes aegyo to weird, parodic heights.” In a recent roundtable, Pat said, “while I had initially said “No,” it just stayed in my mind,” while Jaclyn countered, “I detest ‘Bar Bar Bar.’”  Parodies and tributes to the colorful, weird video and its signature dance moves have popped up all over YouTube. It’s not just amateurs who got in on the action either. Hip-hop group MiB recently made their own contribution:

Back in August, Wall Street Journal blogger Jeyup S. Kwaak asked, “Are these five jumping girls on their way to produce this year’s ‘Gangnam Style?’” Noting that “Bar Bar Bar” seemed to be experiencing a late surge in Korea, Kwaak made a rather large leap in logic and suggested that this could mean capacity for success in the US. The relationship between success in Korea and the US is never really very clear. But Kwaak’s spotlight may have caused some of the phenomena the article was predicting: the article spurred a flurry of interest from American media outlets and around the same time, global music label Sony signed Crayon Pop to a contract.

Months later, Crayon Pop’s “Bar Bar Bar” was rebirthed, not terribly creatively, as “Bar Bar Bar 2.0.” As the video opens, it’s immediately evident that there’s been some editing to the song, and it’s not for the better. Meanwhile, with no exaggeration, I share with the readers that the opening literally made me nauseated. The flashing lettering, the back and forth between scenes and apparent up and down movement of the camera induced a mild car sickness that did not really go away until the three minute, 14 second horror was over.

During that time the viewer is subjected to an overexposed video. No, there’s nothing inappropriate for the kiddies in it. It’s just that, literally, they could not quite get the lighting right, so everything is overexposed. To add insult to injury, the cool amusement park that’s down on its luck theme is gone. Gone are the sad rides in need of some energetic, fun loving folks. They are replaced by a generic gazebo, a generic park entrance and a playground that could be in any suburb in the United States from the looks of it. The white studio stage is replaced with commercial street and mall scenes that are completely nondescript and therefore not worth discussing here.

Unfortunately, for us and them, the ladies of Crayon Pop don’t look like they’re having fun, and the people around them don’t actually look terribly excited. At points, the dance moves lack the sharpness that we’ve come to expect, making one wonder whether they are finally getting tired of doing them. By contrast, when “Gangnam Style” took off, it seemed like PSY was emboldened more and more with each rodeo move. In the meantime, the jack-in-the-box dance move is done over and over and there’s very little new choreography. In addition, the core move is kind of ruined by the lack of a buildup to it, which was part of the fun in the original. The pogo sticks had the potential to be fun sites of new moves (and a new fad?), but they never really learned to use them very well. 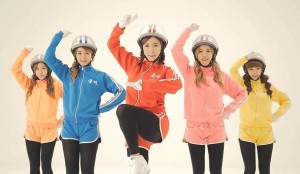 The music video seems to go to great pains at the beginning to capitalize on the color blocked theme of the original video’s styling. This time, they come in all different color racing suits at the same time! Wait wait, now they are all the same color again, but this time, it’s not red. Whoa whoa whoa! Of course, they came in different colors in the original too, but at least the outfits also changed, and it’s possible I was kind of partial to the shorts-black leggings combo outfit.

Readers may remember that in the roundtable I said that the first time I saw the MV for “Bar Bar Bar,” I thought it was brilliant. The last time I watched it, which was during this writing, it was still pretty good. So look, it’s not like I wanted to get drunk on hatorade. But the video just made it so easy because it ruined pretty much everything that was great about the original and failed to improve on any of the weaker parts. One acquaintance even remarked to me that people should be fired over this music video.

To be fair, the video is not completely useless. Although it’s nauseating to look at, the beginning does give the world a proper introduction to Crayon Pop’s various members, allowing new and old fans to put names to the faces. This may prove to be handy should the group ever put out another song that is worth listening to, which is a questionable proposition if one considers their past output and the professional “upgrade” given to “Bar Bar Bar.” Having said all of that, Devo should do us all a favor and do their own parody. It would be so epic, and maybe offer this song some redemption.