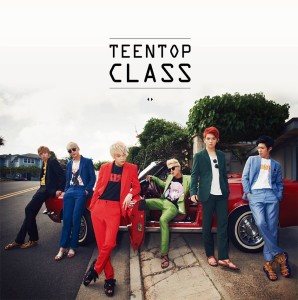 It hasn’t been too long since Teen Top‘s last comeback with album No. 1 back during February. The album was a fair success for the six-membered group. Their lead single, the Brave Brothers produced “Miss Right,” while not as well received internationally, turned out to be a huge success for the group in Korea, for it became their highest-charted single to date. Now, half a year later, the boys are back with their new mini album Teen Top Class, led by lead single “Rocking.”

The mini album leads with a short one minute intro called “Teen Top Class” named after the album’s title. The short school bell effect opens the album effectively, gaining the attention of listeners, before abruptly transitioning to the song’s heavily hip-hop inspired sound. While many album intros could easily be expanded on and maintain the same charm, this song benefits from its short duration. This is because the song’s electronic and loaded nature could not only get repetitive but grating after a while, but keeping the song short makes the piece seem more like a short burst of enjoyable, albeit slightly obnoxious, energy.

Despite the album’s overall diversity, “Teen Top Class” is actually fairly representative of the album it’s named after, personifying and unifying the different sounds featured in the compilation. It carries a fast-paced, electronic synth-pop sound, is decently hip-hop inspired, and features a slightly old-school vibe, little elements that are consistently seen in the rest of the album as well.

Following “Teen Top Class” is the effort’s title single “Rocking.” First of all, the transition between the two songs are flaw-free. Both songs are similar in nature, both being heavily electronic synth-pop tunes with noticeable hip-hop influences. But more than that, going from the previous song’s loaded sound to the quiet build up in the song’s intro helped build a suspense that the song manages to maintain through the rest of the track. 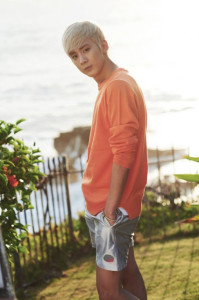 Following the small intro is the song’s main chorus and hook. Said chorus features a very layered and heavy sound, being loaded with heavy-hitting synths. It manages to be catchy and attention-grabbing at the same time, however, it does get a bit tiring after a few listens. Unfortunately, the tiring nature of the song’s hook detracted from the song somewhat.

To sum up my thoughts, I thoroughly enjoyed the first half of the song. The first set of verses provided enough cool down to ease the song while still maintaining its fast pace, while the pre-chrous seceding the verses helped rebuild enough tension that allowed the transition back to the chorus as natural as possible. This allowed the hook to actually be more enjoyable in its second reiteration, for the build up that led to it did wonders to its sound.

However, from there, the song gets to be a little repetitive and overwhelming. The second verses were enjoyable enough with its rap section and confident execution. However, it didn’t provide the cool down the song desperately needed to remain refreshing, and consequently, the third and all subsequent reiterations of the chorus got old and tiring very fast. This left the remainder of the track to be overwhelming to the ears, as the song’s loaded sound bombards the listener relentlessly without much rest.

Admittedly, “Rocking” has its obvious flaws. Despite that though, the track is one of the better choices for a lead single — the only other potential choice would be “Don’t I,” but more on that later. This is because regardless of its flaws as a song, “Rocking” is definitely more of a performance piece. Rather than being heard on an album, “Rocking” would probably benefit more from being seen along with its accompanying choreography and theatrics. Its dramatic, excessive sound would be perfect for exaggerated and attention-grabbing motions onstage, and there are blatant moments for dance breaks littered throughout the song. And with Teen Top being one of the better all-around dance groups promoting at the moment, I am looking forward to the live performances of “Rocking” despite my reservations on the song.

The next track is the previously mentioned “Don’t I.” Quite frankly, “Don’t I” is my favorite track of the album. Backed by a brassy and straightforward saxophone loop, the song has a retro flair that suits the group very well. The old-school retro feel of the song suits the higher vocal tones of Niel and Chunji, the stronger vocalists of the group, and the rap sections are handled especially well. Unlike the sound of some of the other tracks on the album, the sound of the piece is very smooth and doesn’t tire the listener as fast, charming with its linear but well-executed simplicity. I would also love to see this song performed by the group, for while it isn’t as performance-focused as title track “Rocking,” the song caters to each members’ strengths so perfectly, making it a stand-out in Teen Top’s entire discography.

The following track, “Oh! Good,” has Teen Top revert to the more electronic-inspired synth pop sound that dominates the majority of the album. However, compared to “Rocking” and “Teen Top Class,” “Oh! Good” has a much more tame and cooler sound. While the song lacks a solid hook to make it stand out, its verses and pre-chorus are exemplary, making the piece a formidable work of synth pop, 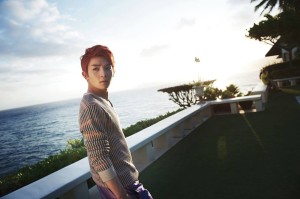 “Date” is the next track on the effort, and it fulfills the mandatory ballad present in the majority of K-pop albums. Compared to the rest of the album, “Date” definitely sticks out like sore thumb. The only thing that relates “Date” to the rest of the album is its slightly old-school and retro influences, influences seen in other tracks in the album. Getting past the slightly embarrassing opening — complete with not only a cringe-worthy monologue but also with cheesy sparkling sound effects — the song itself is decent. It’s sufficiently executed — Niel in particular stands out vocally as usual — and it entertains long enough for a listener to get through the track. That being said, the track offers nothing new and is fairly forgettable, offering very little inspiration for a second listen.

The last track of the album is “Rock Star” featuring Maboos. Immediately, as soon as the song opens, a clear drum beat gives the song its grounded feel, and the brass sounds heard in the chorus give the song a very enjoyable old-school influence. The song manages to be very catchy without trying too hard to settle a hook, and the sound is very dynamic, continually floating between highs and lows. The rappers of the group give the song the high energy that makes the song so enjoyable, all in all, making a more than sufficient close to the more than sufficient album. If I were to point out any flaws to the song, though, it would be the grating high pitched echo effect that runs rampant through the entirety of the song. It felt entirely unnecessary, only cluttering up an already decent song.

Overall, for the most part, Teen Top Class really offers nothing new from the group. The sound is somewhat familiar and comfortable, and the members sound well into their comfort zones. What the effort does offer to the group, however, is a newfound polish and maturity. The effort demonstrates the growth the Teen Top members have experienced, for now they are more assured and confident performers. I can only hope they continue to grow in future efforts.

All in all, Teen Top Class gets a decent 3.2/5 from me. Readers what are your thoughts on Teen Top’s new effort?