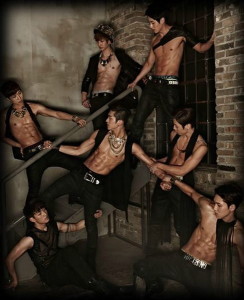 Food is more than just sustenance; it is an aspect of life present in our everyday lives. Food can be symbolic — olives, peace and chocolate, romance – or comforting. We use terms associated with food to describe our displeasure and/or our delight: “He’s so handsome, I could just eat him up.” Often we use food as a describing tool: “She’s pear-shaped” or “her lips are as red as apples.”

This is a common experience throughout the world. In almost all cultures and languages there are food-related descriptions and metaphors. We can even find them in Korean culture and, by extension, K-pop. Some of the most common food descriptors are “chocolate abs,” “mandu cheeks,” “honey thighs,” and “bagel girl.”

Taking it from the literal to the comparably abstract descriptors, “Chocolate abs” and “mandu cheeks” come first for their obvious references. The former term is used when idols (men in particular) have well-defined abs, and the latter, when someone has full, round cheeks. 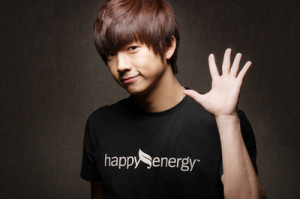 “Chocolate abs” first became popular in K-pop in 2009 after 2PM starred in this CF. This coincided somewhat with the rise of the “beast-dols” — idols whose image practically scream masculinity. “Chocolate abs” are named so because a set of defined abs resembles a bar of chocolate, crevices and all.

Continuing on from the above, another literal food descriptor is “mandu cheeks.” Mandu, in Korean, means dumpling and this term refers to the shape and outline of cheeks that resemble dumplings. Some idols who have such cheeks are Sohee from the Wonder Girls and Wooyoung from 2PM.

A more abstract term is “honey thighs.” The consensus on this varies but the most widely accepted definition is thighs that are “as sweet as honey.” Basically,  this applies to female idols whose legs aren’t stick thin but aren’t too big and muscular either; their legs are the perfect middle ground.

“Bagel girl” is probably the most abstract because it doesn’t actually refer to food. Rather, bagel was formed from the combination of “baby face” and “glamour.” It makes more sense if you look at the Korean etymology:  베이비페이스 (baby face) and 글래머 (glamour) + 녀 (girl) = 베이글녀 (bagel girl). 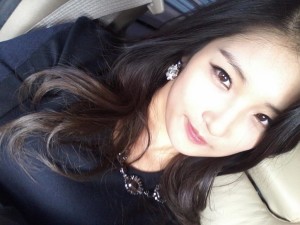 The concept of a “bagel girl” has been discussed before on Seoulbeats. In short, these are women with young, innocent faces who are also well-endowed in the chest department. Or, as Nabeela puts it, a “fresh-faced beauty with a killer rack.” While “bagel girl” is more often associated with actresses like Shin Min-ah and Shin Se-kyung, it can apply to female idols such as 4Minute’s Nam Ji-hyun.

Food is so pervasive throughout our lives that we import qualities and likenesses of food into everyday terms. But when we think of food, we tend to think of objects and consumption. This is where the danger lies. While on the surface these terms are harmless, they can quickly cross the line of objectification. 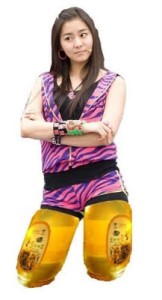 When food descriptors are used as direct representations of people, the human element is taken out of the picture and suddenly, we are not describing whole persons, only their body parts. Take “honey thighs,” for example: while the term is meant to be a compliment — and it can certainly be used that way — reducing an idol to only their legs dehumanizes them.

A little while after receiving the title of “honey thighs,” Uee was criticized by some fans when her legs appeared to be slimmer. Most of the criticism was not about her health but the fact that her thighs weren’t “honey thighs” anymore. This kind of criticism is ridiculous. Even though Uee embraces her “honey thighs,” she is more than just a pair of legs; fans should be aware that idols’ are placed under strict regimes when it comes to the upkeep of their image, and by extension their bodies.

These food descriptors can be used in a good way, such as to bestow compliments. Problems arise, however, when these descriptors cross the line and rebrand the idol as a perishable item. It’s fine to use these terms but remember, at the end of the day these idols are human beings and are not only bagel girls nor their mandu cheeks, chocolate abs or, honey thighs.

How do you feel about the use of food descriptors? Does it affect your perception of the people they describe?