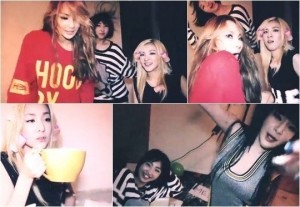 But it seems that it was not meant to be. The track starts out promising enough. The opening features an 80s-like synth sound that sets the stage for an epic, promising prequel to last summer’s “I Love You.” But something goes wrong almost immediately: CL starts spelling out not just one word but the entire title of the song. For anyone fluent in English, this is potentially jarring. I wanted to respond, “Yeah, I know how to spell the name of the song!” after the second round of spelling started at the end of the first verse. While CL’s voice sounds excellent, it’s just completely wasted on this phrase.

The lyrical failure doesn’t stop there. Indeed, the lyrics are characterized by an obsessive and immature point of view on making a genuine emotional connection to a potential romantic partner. There’s nothing transcendent or beautiful. To some, the lyrics will be read as syrupy and sweet. Alternatively, they might be read as perfect, creepy stalker material:

Mon, Tues, Wed, Thurs, Fri, Sat, Sun, I only think of you
Morning, lunch time, evening, dawn, all day you burn me up
In the end, L O V E is what I say
I think I have fallen into the ocean called you

While this might appeal to younger audiences, 2NE1 (and their song writer/producer Teddy) can and have done better, and we wonder if they should have taken their own advice from “I Love You”: don’t become obsessed.

Maybe the lyrics wouldn’t matter so much if the delivery mechanism didn’t fall so flat. While the sound got off to a strong start, instead of building into something bigger and bigger that carries the listener away, the song builds up a little and then just stays there for three and a half minutes. It’s almost like an aborted lift off. Each contributor individually sounds pretty good, especially Minzy and Park Bom, but they gave me a snack when I was hungry for a feast. In fact, that is essentially this song’s whole problem. Coming from anyone else, it probably would seem like a decent song. But coming from a Teddy-2NE1 collaboration, we just expect more.

Sometimes an excellent music video can make up for a mediocre song. Also, sometimes things go wrong, and the original music video concept has to be scrapped. This is what happened with the video for “Do You Love Me?” To keep their release schedule on track, YG Entertainment decided to film a music video using cell phones and handheld cameras at the Jejudo villa of YG’s Yang Hyun-suk.

There are two ways of looking at the end result. The first is that there is nothing inherently wrong with it. It might have absolutely nothing to do with the music or anything else really, but it’s fun. 2NE1 gives their fans a look at what it could be like to party with them, and it sure seems fun. There are pillow fights, nights out clubbing, dancing, looking wasted and half done up in the bathroom. There are cameos from the YG Entertainment family and a fun animated mouth on a smartphone. All ingredients for a good girl’s night out, at least by some people’s standards. In fact, it would’ve been a great video for “Fallin’ in Love.”

And that’s the second way of looking at it: the song and the video just don’t match. The video seems completely random. It lacks the emotion that the lyrics express. In the end, this makes the video kind of a disappointment. Would it have been so bad to just let the release schedule get pushed back? They did just announce that G-Dragon’s newest album is postponed without even announcing a new release date. The whole thing starts to seem a little lazy on YG’s part. They had a setback, so they decided to not really try anymore. I’m not impressed.

Unfortunately, the same is true of the choreography for this song. They debuted the dance moves on M Countdown, and while they are an improvement over the pathetic effort for “Fallin’ In Love,” they still fall short of what we might have expected after “I’m the Best.” The moves are fun, but they lack power. Minzy’s tremendous dance skills go unused, while Park Bom seems to be losing her touch. Sandara and CL perform inoffensively, but it’s still boring. They did put on some pretty fabulous clothing though, so not all was lost.

Indubitably, many if not most Blackjacks will be pretty excited about this release, the sound, the video and the new dance moves. But overall, 2NE1’s relatively weak releases this summer have made more than one wonder whether Teddy is asleep at the wheel, bored or just out of ideas. Whatever the cause, this potential trend is worrisome. He set the bar so high that now it’s disappointing when he’s not able to clear it. While “Do You Love Me?” is an acceptable contribution to a K-pop daytime music mix, it’s not dance floor material that we’ll be excited about in a couple of months, much less a year later. That’s a shame — whatever they were dancing to in the music video looked like it might have been the right stuff.