Side B: Following The Dynamics of Dynamic Duo 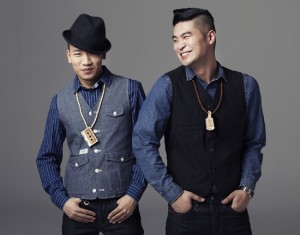 Welcome back to another segment of Seoulbeats Side B!  This week we’re covering Korea’s Hip-hop legends, Dynamic Duo, in light of their return to the music scene with their 7th Album, Lucky Numbers. The moniker of “Hip-hop legends” is not without reason; this is a group with an expansive and noteworthy discography, starting with their first album, Taxi Driver, which came out 2004.

Taxi Driver went on to become the number one Hip-hop album of the year in terms of sales, with the fantastic title track, “Ring My Bell,” a hip-hop remake of the 1979 Anita Ward disco classic. But as great as the song is, we clearly didn’t come to a Side B to hear title tracks, and I would instead like to focus on the sundry of lesser known, but still amazing music within their discography. With a group like Dynamic Duo, musical gems come at about a dime a dozen, and most of the work is in trying to sort through it all. I highly recommend checking out their full discography, because there is no way that I could possibly cover all the highlights here. Instead, I’ll try to hit as many musical styles as I can, as well as my personal favorites.

This first track is the song that comes before “Ring My Bell” in Taxi Driver, “불면증 (feat. Bobby Kim).”

“불면증,” or “Insomnia,” is certainly a far more laid back song and takes on the mellower (RnB laced) and more melodic end of Hip-hop, a style that you can find in other Korean Hip-hop groups, such as Epik High or Leessang. I might even go as far as to call it my favorite of the album, just because I love its nonchalance. However, despite my assertion to avoid the well-known, “Insomnia” is somewhat of a famous track of theirs and even has a music video. Nevertheless, I couldn’t help but add it in—”Insomnia” really touches the soul.

“Superstar (feat. Tiger JK, sean2slow, and dj tukutz)” is another track from Taxi Driver, and it’s pretty much the antithesis of “Insomnia,” bold, snappy, and full of life. Despite the vibrance of the song, the song maintains sophistication and finesse. Show-tunes and big-band music have the tendency to be taken to the extremes, becoming loud and abrasive. Dynamic Duo, in contrast, is able to approach the show tune style without becoming overrun by it.

Dynamic Duo’s second album, Double Dynamite, came out a year after Taxi Driver and won them Best Hip-hop album of the year from the Korean Music Awards. This song from the album is “파도 (I Know),” and features Paloalto.

What stands out about this song, more so than the  impeccable fluidity between Gaeko and Choiza, is the fluidity between the verses and the rapping. Though the quality of the rapping could easily allow it to stand on its own, there is a sense of continuity that I see between the singing, the sing-rapping, and the rapping which eases the listener through the various components of the song and creates musical cohesion. It sounds so obvious and simple on paper, but it’s actually quite a rarity (especially when you’re used to hearing idol rapping).

In 2006, Dynamic Duo left EMI Music Korea and moved to their own label, Amoeba Culture. Their first album under Amoeba Culture is their third overall, Enlightened, which came out in 2007. In 2008, the group released a single album, Newways Always GONE, and their third album, Last Days.

“Trust Me,” from Last Days

It wasn’t until Band of Dynamic Brothers (lead single: “Guilty“) in 2009,  however, that we begin to really see Dynamic Duo take on a greater variety of musical styles (you can even hear some reggae in “Ugly“), though they don’t abandon their fundamental sound. This album is also their last before leaving for the army.

A standout track in Band of Dynamic Brothers, at least to me, is “끝 (Apoptosis).” The song carries a rock/alternative edge, complements of the tinny guitar and wispy vocals. It’s a powerful song recounting the story of a quasi-suicidal person, lonely and burdened by life, yet not entirely willing to die. The message reflects the song title quite well; a cell which undergoes “apoptosis” does so under coercion, as though it were “hated” by the others around it. The narrator of this song goes through bouts of anger towards the world, feeling hated by everyone and everything, bogged down by a sense inadequacy and hopelessness in fulfilling expectations. Though all those signs point towards a man who desperately wants to die, the ending message is quite the contrary. In fact, when finally facing death, he desperately wants to live, to fight—to survive.

For contrast, here’s “Sauna (feat. E-Sans of Supreme Team),” from the same album. It sounds nothing like “Apoptosis,” and the lyrical content isn’t the most…insightful. Let’s say it’s about having a good time.

Dynamic Duo’s last album, Digilog 1 & 2,  is a two part album (something we’ve seen a lot lately) that tries to separate what could be a deluxe album into two distinct sections. The first half takes the brighter electronic route (the “Digitial” of “Digilog”) while the second takes the darker acoustic route (“Analog” in “Digilog”).

“Girl” is a jazzy number that has a gorgeous chorus and guitar line. It has all the elements of a feel good song, a meandering beat, trumpets (this is a must, of course), and a lighthearted instrumental loop. I especially like the syncopation in the rap against the instrumental. It gives an added air of effortlessness, maybe even placidity.

This song is up against “Insomnia” and “Apoptosis” for my favorite Dynamic Duo song, and rightfully so. This song is  beautiful, and is actually my first Dynamic Duo song. In retrospect, this sound isn’t the most representative of Dynamic Duo’s music; distorted, electronically embellished vocals complementing their rapping isn’t really the musical mark of the duo. It is, however, similar to the musical style of “Apoptosis,” so if you’re a fan of that song, you’ll likely be a fan of this one.

I started with an RnB number, I might as well end with one. “Without You” is not all that noteworthy of a song, though I appreciate it for its simplicity. It’s the kind of track that suits the overarching feel of Dynamic Duo — good music that doesn’t think too highly of itself.

If anything, this list of Side Bs have shown that there’s a Dynamic Duo song for every mood, be it a good one or a bad one. Hopefully I’ve done justice to Dynamic Duo’s discography via this Side B and that this inspires you to take a stab at their music if you aren’t a fan already. At least for me, going through the group’s evolution via their various albums only makes me more excited for Lucky Numbers and seeing how much they’ve grown since Digilog 1 & 2. Good thing we don’t have to twiddle our thumbs for much longer.