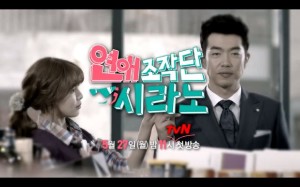 Cable channels have been really taking the lead in drama producing recently, releasing dramas of great quality in various genres. Some are extremely thoughtful (End of the World, Cruel Palace: War of Flowers, Joseon X-Files), some not as much (She is Wow, Monstar, Oh Boy! Series, Queen Inhyun’s Man, Answer Me 1997), though I can safely assert (for now) that nearly all are sincere and certainly not brain dead….or at least, they’re not coming up with brain fetuses that look like gummy bears as plot development (ahem…Dr.Jin). I’m not implying that the big three networks (SBS, KBS, and MBC) are entirely terrible now, but I do think that cable offerings are not something to gloss over any more. The next instalment of tvN‘s Oh Boy! (Flower Boy) series is no exception to this.

Dating Agency: Cyrano (referred to henceforth as Cyrano) is the drama adaptation of the popular movie Cyrano Dating Agency, starring Uhm Tae-woong, Lee Min-jung, Daniel Choi and Park Shin-hye. The whole Cyrano concept actually comes from the 1897 play Cyrano de Bergerac, by Edmond Rostand. (One of the drama characters, Ah-rang (Jo Yoon-woo), is even seen reading the play during the show.)

Note: Spoilers may appear below.

As for the drama, it stars Sooyoung of SNSD (who completely surprised me as an actress) as Gong Min-young, a plucky young (depending on how you define it) woman with wide-eyed perceptions of romance. At the start of Cyrano, Min-young works at a large commercial “dating agency,” but has been having a bit of difficulty getting her client to win the heart of the partner of his dreams. Min-young runs into Seo Byung-hoon (Lee Jong-hyuk), the owner of Cyrano Agency (a much smaller dating agency of three people) while trying to finally get her client (cameo Ji Jin-hee) with a ballerina (cameo Lee Chung-Ah). But to her dismay, she finds her efforts thwarted when the latter is whisked away by a sommelier.

Min-young quickly finds out that Byung-hoon had been the cause of her failure, for he was contracted to make the ballerina fall in love with the sommelier. Nevertheless, Byung-hoon doesn’t leave without first chiding her work and naiveté and then handing her his business card with an offer to join his small agency. It’s clear from the get-go that the two will be idealistically at odds, as Byung-hoon believes in methodical theatrics as key to spurring romance, while Min-young puts faith in earnestness and genuine feelings. Under that pretense, she refuses the offer, but once Min-young is quickly fired from her original job, she joins Cyrano, realizing that methodical theatrics with good intentions is far better than the file-focused apathy of her previous position. 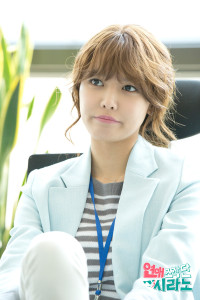 Dating Agency: Cyrano is a unique offering in “dramaland,” for unlike most dramas which relate a single story over a span of say 16 episodes, Cyrano is structured around multi-episode arcs. Each arc covers a single “operation” or client, while supporting an underlying story line among the main leads. The first two-episode arc covers the story of a vet named Jin Joo-hyuk (Im Hyung-jun), who falls in love with a mystery novel junkie librarian, Jae-hee (Lee Yoon-ji). Hijinks ensue, with Dr. Jin taking on the persona of his foil (a man of mystery and intrigue) to attract Jae-hee, who had become blasé towards men who do nothing to spice up her boring life. The second arc’s client is self-absorbed idol star Ray (Shinee‘s Taemin) who falls in love with the class president Se-kyung (Yoon Seo) — the one girl in the world who doesn’t automatically love him back. Things get complicated when Ah-rang (one of the Cyrano members and classmate of Ray and Se-kyung) gets thrown into a love triangle with the two.

Amidst the romantic scheming that takes center-stage in each episode, there is a side story that weaves through the all the episodes, concerning Byung-hoon and “Master” Cha Seung-pyo (Lee Chun-hee).  “Master” is a restaurant owner whose business is adjacent to Cyrano Agency (housed in a theater) and meets Min-young the day she joins Cyrano, hinting at a future love triangle with Byung-hoon. The show slowly reveals that Byung-hoon and “Master” seem to have a very complicated relationship since their school days that appears to be rooted in yet another love triangle. There is also a “slight” indication of great animosity between the two, as evidenced by the “Master’s” attitudes and strange activities (i.e. being an indiscreet stalker) in regards to Byung-hoon. Min-young also seems to be thrown into whatever mess is between the two men because there is some indication that Min-young is suspicious of the duo’s past, and “Master” seems to be uncharacteristically interested in the relationship between Min-young and Byung-hoon.

As to what all this will mean in the end, I have no idea. Currently, this side thread of sorts is very weak narratively, as I don’t quite see what “Master’s” motivations are. I just get creeped out by his picture-taking, and his character development so far is relatively weak. 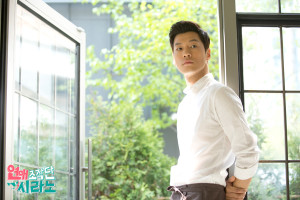 However, one way that Cyrano succeeds in ways that I don’t see in a lot of dramas is how grounded and earnest the premise of the show is.  It has its ridiculous moments, and that there are some very apparent plot holes; however, Cyrano is well aware of its shortcomings and eventually turns around to make the theatrics a part of its overarching message. One could easily surmise at first glance that Cyrano has a very skewed perception of romance, love, and what it means to be in a relationship.  The first two episodes were certainly whimsical enough to make that seem true. In reality, however, they are misleading about what Cyrano attempts to, and should, become.

It wasn’t until I hit episode four that all the pieces finally seemed to fit together — where the emotional cracks and development within Cyrano Agency begin to take root.  For the first time, Cyrano became a show about experiencing the growth of the four people of Cyrano Agency. Each client is a lesson for the agency members to reevaluate their stance on the meaning and basis for love, as well as their own personal relationship with it. Even when an operation succeeds, there are great lessons to learn from the experience for everyone. Be it a young or a mature relationship, old love or new, romantic or platonic feelings, Cyrano is all about finding what it means to have relationships with people.

The beauty of using older people as the focus of this particular narrative is the breadth of life experience that the characters have behind them that reflects in their characterization. Basically, they (save for possibly Seung-pyo) aren’t caught up in the trivial. Byung-hoon and Min-young are very clearly at a point in life where they need to have some sense of retrospection while pushing themselves forward. I’m happy to say that they are some of the few characters in the dramaverse that realize it. They recognize that they have flaws and seek to correct them, even if the pace of discovery and self-modification is painstakingly slow.

Regardless, the show doesn’t hang on manufactured drama, but the realities of interacting with people. For example, Byung-hoon may have found his precious doll to be damaged by Min-young, but he doesn’t harp on its significance or excessively brood over it. He has no reason to, especially in front of Min-young. Min-young is also an observant girl who tries to learn from the people around her. She may be imperfect and a little air-headed, but nothing too annoying or off-putting. She doesn’t lean on Byung-hoon for everything, nor does she romantically pursue him at this point. Instead, you feel a sense of a growing friendship between the two that has glimmers of potential chemistry. It’s as emotionally realistic as it gets: two people meet, develop a friendship, and then slowly fall in love.

In short, Dating Agency: Cyrano is a beautiful slice of life that carries great restraint.  Tune in for its slight flamboyance, charm and ambiance, but stay for all the heart.