Indie rock band Nell is back with “Ocean of Light” from their latest mini-album, Escaping Gravity. Though recently known for their complex story MVs like “The Day Before” and “White Night,” Nell delivers a different kind of video this time around, where they are the only characters. The band proves that different is a good thing, however, because “Ocean of Light” perfectly reflects the song’s simplicity and emotion by focusing on Nell’s stunning performance.

The song lyrics talk about change, breaking through walls and letting your dreams run free in an ocean of light. To show the emotional journey of the song, the video is broken into two distinct halves, a before and an after. The first half features Nell crammed into narrow rooms, which reference the “break the wall holding you in” lyrics. All the members are literally walled in by four rooms that are identical in size. Each set is a different color and represents a different room in a house (bedroom, bathroom, etc.), but they are essentially the same room. At the very beginning of the MV, each member paces or does nothing, showing the unchanging nature of their lives. Lead singer Jong-wan even taps on the wall for added emphasis.

This sameness is also illustrated through the camera work. The video makes use of the popular sped-up frames technique to show passage of time and monotonous movements, and it’s refreshing to see this used for something more than visual effect. The scenes constantly shift from room to room, culminating in a seamless slide over each set, showing that the same thing is literally happening over and over again. However, in keeping with the upbeat feel, these motions are not without humor. Whether it’s Jae-kyong pouring liquid over his head or Jae-won kicking his drumsticks, the video reminds us that this is a happy song. 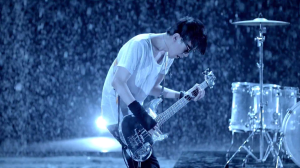 The only thing the band does in the video is play music. In the first half, while the performance is energetic, it also feels contained. Nell can’t move as freely during this part simply because of room size. However, despite the frustrating claustrophobia, Nell still plays with passion. They play music no matter where they are, even in the bathtub, which could be an interpretation of how art is the thing that drives them and frees them.

Just when the video starts to drag, it changes in a big way. Light beams pierce the walls and the band disappears. Where to? To a gigantic space with rain falling down, that’s where. Despite fears that they will get electrocuted, from here on out the video is one awe-inspiring performance. Nell lets loose as the synthesizers peak, and for a good 30 seconds we get them rocking out to the music before the chorus comes back in. Watching Nell play full-out is captivating, which is probably why the first half stretched over most of the lyrics. The singing helps keep the audience interested in that first bit and foreshadows what is to come, so that by the time the second half rolls around the music and performance can have full focus.

Lastly, there are the shots that are the visual representation of the ocean of light. These are individual shots of the members floating on water, playing their instruments, silhouetted by the sun. Since the video looks at performance and the relationship between musician and instrument, this final set is very effective at showing how physical performing music is, since all we see are their bodies moving. Also, these are simply gorgeous shots that really embody the title of the song. The last moments of the music video are the band mates dropping their instruments, maybe in the ultimate metaphorical symbol of letting go, or at least letting the song go. 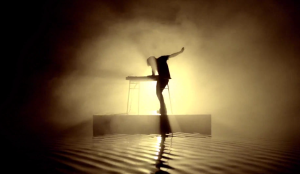 There’s not much to criticize about the video, since it reflects the lyrics, plays with the music and is visually stunning. However, the first half did feel like it stretched on a little too long. The break happens when the music climaxes, so I can’t fault them for taking three minutes to get to the “exciting part,” but they pushed the envelope of many people’s attention spans. The camera techniques in the first half are subtle, which is a great contrast to the blowout visuals of the second half, but they also take close viewing to appreciate, which not every viewer will give. Despite this, the first half does a good job of setting up an expectation of the kind of video we’ll see, then totally breaking it in the second half.

While “Ocean of Light” is not the most ground-breakingly different MV, it is a great performance video because not only does it illustrate the band’s performing prowess, but also it is an appropriate song with which do it. The lyrics and music are more uplifting than what we associate with Nell; they’re simple, yet heartfelt, and maybe that’s why showing the band works so well for this MV. The audience sees Nell express themselves to the fullest, externalizing the theme of the song. Seriously, what’s a better way to symbolize dreams and letting go than watching a bunch of talented musicians rock out? 4.5/5.

Readers, what do you think of the video? Did it fulfill your expectations?