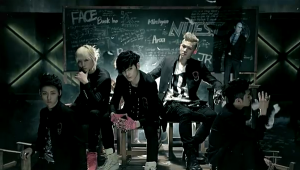 Ah, music. It’s the name of the game–or some of it, in K-pop. It’s no secret that this industry places as much emphasis on the visual as it does the audio (and perhaps even more so), which goes a fair way to explaining the place the music video has in the K-pop machine. The music video is an integral component of any comeback or debut: fans stay up at all kinds of odd hours waiting for music video premieres. Why? Because the music video is the ultimate representative of the concept of a group’s new release. It brings together both the audio and the visual side of a group’s concept into a four minute package (most of the time). Because this is about music, the visual side needs to match the song in not only the overriding theme, but also its mood and meaning as well, and thus perfectly complement the song and allow it to truly shine, like a well-matched wine does for a meal.

In our Best MV poll for the Seoulbeats Mid-year Wrap Up, we asked you which you thought was the best MV released in the first six months of 2012, and as of writing the top three MVs were (in ascending order of votes) Nu’est‘s “Face,” Exo‘s “Mama” and JYJ Xia Junsu‘s “Tarantallegra.” All three music videos are wonderfully dark in the themes they dealt with, as well as visually. “Mama” and “Tarantallegra” also have fantastical elements present in their MVs, especially in the former, which were brought out with fine cinematography. “Face,” meanwhile, dealt with real world issues, issues which were also reflected in the lyrics. The use of reddish pink accents in the MV, while quite unexpected for a boy group, worked to make the MV and Nu’est stand out from the other rookies in this half-year. But those were the quantitative results; what of the qualitative? Looking at the comments section, many readers favoured “Tarantallegra,” and this was reflected in the poll as well. So the voting worked out for those who picked “Tarantallegra” as the best MV–congratulations! That said though, many people were stuck in a dilemma over which MV to pick, and I think that everyone can agree that there were other MVs that were also deserving of the “Best MV” title for the first half of this year. And so, I thought it would be appropriate to shine a light on some of these videos with my own countdown. So, without further ado, I present to you my Top 3 Music Videos for the First Half of 2012:

The girl groups can stop with all the aegyo; this is how you do cute. The three members that make up Superstar K3′s runner up band Busker Busker–Jung Beom-jun, Kim Hyung-tae and Brad Moore–go on a bumbling day-trip filled with a comedy of errors (and a lovely, if not entirely unexpected, twist at the end). The warm sunlight and blurring on the edges of the screen give the MV a very dreamlike asthetic, which is furthered by the slow motion, which gives an ethereal effect to the physical comedy. The accompanying animations are also absolutely adorable, adding to the innocence of the MV and song, as do the bunnies (!), underlining the sweet message of being with the one you love and journeying forward in life together, hand in hand. “Cherry Blossom Ending” looks as it sounds, like a bright and cheery spring day, enticing you to move along with them to the soft music.

In contrast to the laid-back charm of “Cherry Blossom Ending,” “The Grasshopper Song” is faster, bolder and bigger. This MV is the closest one can get to having the visual matching the audio, with Sunny Hill’s version of the Aesop fable The Ant and the Grasshopper being acted out in time with the lyrics, as a story itself. We are literally pulled closer and closer into this insect world by the sets–the curtains are raised to reveal cubicles which split to show Mi-sung in a new room with a back wall built from boxes that tumble down beautifully to reveal Seung-ah. With each set change, the camera has moved forward until we, the audience, without even realising it are standing right in the epicentre of this universe that Sunny Hill has created. The sets are gorgeous and inspired, as are the insect costumes and the little details scattered throughout the MV, from the giant buttons used as fixtures to the very professional magazine covers. With a novel and exciting concept and perfect execution, The MV for “The Grasshopper Song” showcases the lyrics of the song within a narrative following ant Jang-hyun‘s journey of discovery.

I have an admission to make: I only watched this MV for the first time three days ago. I’ve since spent much of my time in a state of constant anger at myself for not having watched it earlier. The conversation between the two men (played by Song Jae-rim and Lee Min-ki) is never heard by the audience but the meaning can be sensed from Nell’s lyrics, and while it is open to interpretation as to the nature of the relationship of the men, the lyrics lead me to believe that they are in fact lovers.

The cinematography in this MV is beautiful: in the beginning, the camera is deliberately zoomed in on various objects, with a shot of a camera lens being fitted filling the whole screen and both mens’ faces being only partially shown until halfway through the MV when an aerial shot of the table the two men are sitting at is shown. From then on, the camera decreases the zoom, which I found to indicate the gaining of a new perspective both literally and metaphorically, with the audience discovering more about the space in which the MV takes place as Jae-rim comes to accept Min-ki’s decision, while the close up, slightly unfocused shots from earlier reflected Jae-rim’s sadness and confusion. The subtle introduction of colour throughout the course of the MV also seems to serve the same purpose of showing Jae-rim’s journey to acceptance, or perhaps even to signify a return to normal life after being in a state of sadness. This really is a beautiful MV which conveys the meaning of the song so well, and if you haven’t seen it yet, please do; you won’t regret it. 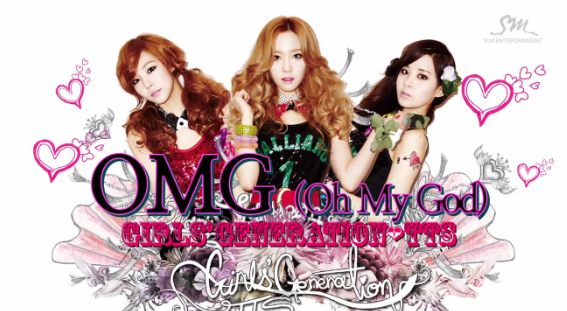 So those were the best MV’s I’ve seen so far this year; but while there is a lot of good, there is also the bad. Standouts included MBLAQ‘s “It’s War” for its gaping plot holes and gross misuse of Malcolm X which did little justice to what was a wonderfully dramatic song, as well as G.NA‘s “2HOT,” which was both 2-dimensional and beneath her dignity, really. But if I were to crown the worst MV for this half-year, I would without a second thought turn to SNSD TaeTiSeo‘s “OMG.” Ladies and gentlemen, SM has taken the artform of making MVs on the cheap to a whole new level by releasing what is essentially a fancy slideshow of the Twinkle album photobook pictures. I thought it was the winning entry in some strange sort of Amateur Music Video competition run by SM the first time I saw it. Though I doubt we’ll be seeing MVs of this type being released for title tracks, SM may have opened up a whole new world of possibilities that I’d rather didn’t exist…

Readers, you’ve seen my top 3: what does yours look like? And has there been a clanger of a MV that you just haven’t been able to get over? Leave your comments below!