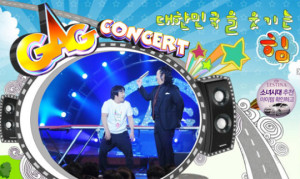 Another week of summer comebacks and debuts has come and gone, but which caused a blip on the 5 Things radar?  Keep reading to find out.

Congratulations are in order for the cast and crew of KBS‘ Gag Concert which just celebrated its 700th episode this past week–it’s been on air for the past 14 years debuting in September of 1999. Now that’s something to celebrate about and they did with past cast members coming back to reprise some of their popular roles and doling out the laughs with the show’s current cast.

The following are the 5 Things that happened in K-pop last week that I think were a bit more special than the rest.  If you aren’t up-to-date on your K-pop and don’t like to be spoiled turn back now or prepare to be more spoiled than some stinky tofu.

5. And this is why you ALWAYS zipper up your tent

I go camping with my family every summer and zipping up your tent door is one of the cardinal rules. The kids and dads of Dad! Where Are We Going? learn this important fact first hand on their latest episode when a inquisitive cow decides to check out one of their tents.  Junsu saves the day again by alerting everyone that a cow had entered Min-gook and his dad’s brand spanking new tent and blessed it.

4. I Can See the Ratings Climb

Literally you could from episode one to two this week as SBS’ new Wednesday/Thursday drama, I Hear Your Voice, shot from third place to first with a jump of 5% in viewer ratings beating out the finale of When A Man Loves watching the first few minutes of I Hear Your Voice, you’d think that it was going to be another high school drama, but it isn’t which you find out towards the end of the clip below.  Lee Jong-suk is doing great as the super powered guardian angel and the story is fleshing out well for our soon to be super crime fighting trio. Here’s to hoping that the story keeps getting better! And you know, I thought if you were scared–you pee more?

The funny gets mixed in with the serious competition as the boys of MBLAQ take each other on with their partners, who were Rhythmic Gymnasts, in a game of couples limbo on the last episode of Let’s Go Dream Team 2.  Seung-ho and G.O. get relegated to errand boys after they get eliminated in the first rounds, but the competition was fierce between Joon, Mir and Thunder as they got down to ridiculous heights.

2. An Ocean of Light

One of K-indie’s greats, Nell, made a come back last week with the release of the second installment of their ‘Gravity Trilogy’ (the first being last December’s Holding on to Gravity) Escaping Gravity. The title track “Ocean of Light” was not what I was expecting at all, but was a pleasant change of pace from what I know of Nell’s music.

1. The Kiss heard ’round the Nation

The JYP Nation, that is. Word is last week’s episodes of the Gu Family Book was a hot topic with the folks at JYPE as one of their maknaes had a kiss scene that wasn’t just your standard K-drama kiss. Lee Seung-gi and Suzy‘s characters in the story, Choi Kang-chi and Dam Yeo-wool, finally had their first kiss and it was no standard light lip mashing.  Of course their emotions were high strung after almost being killed by demon daddy, but not only did they have a great first kiss–Yeo-wool went back in for seconds!  I knew I liked that girl’s moxie.