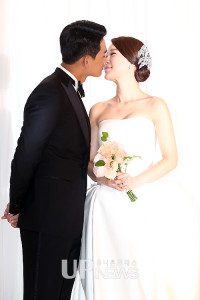 It’s not even officially summer yet, but the closer we get the more exciting things going on in the K-popiverse get announced including come backs and debuts galore.  One of the latest announcements was the comeback of SISTAR mid June with a full album. I’d welcome a “Loving U” 2.0 because that song was perfect last summer, but from the teaser pics being released I’m thinking they’re going in another direction.  Also did everyone hear of the latest K-pop idols coming to the US in concert?  Apparently the ‘Rising Gods of the East’ will be coming to the US and you’ll be able to “Catch” DBSK live in Los Angeles on July 5th–wait how may miles is it from Hawaii to California again?

Congratulations to one of K-pop’s newest power couples ballad queen Baek Ji-young and actor Jung Suk-won who got married on June 2nd at the W Seoul Walkerhill Hotel with a ton of their celebrity friends in attendance to wish them well. The couple be going to Las Vegas for their honeymoon in July.

The following are the top 5 Things that happened in K-pop last week that  I think were a bit more special than the rest. Turn back now or prepare to be spoiled.

5. New MBLAQ on the Block

MBLAQ appeared as hosts on the last episode of Saturday Night Live Korea and they did a pretty good job of pushing the limits on their idol boundaries for 19+ laughs. My favorite skit of the night with them was a toss up between the Black Swan and their ode to the old school with a digital short of them doing New Kids on the Block‘s “Step By Step.” Can’t wait to see more of the new MBLAQ with their latest come back.

4. A miss wins Dancing With The Stars Korea 3

Congratulations to miss A‘s Fei and her partner Kim Su-ro for winning season 3 of Dancing with the Stars Korea.  They really were a great team and had some terrific performances.

What could possibly go wrong when two of your favorite things are combined?!  In this case it’s Yoo Jae-suk and the rest of the Infinity Challenge cast doing a cover of C.N. Blue‘s debut hit “I’m a Loner” on their last episode in which their salary man saga continues. Although it does kind of sound like the chipmunk version of “I’m A Loner.”

2. Bada sings of a Girls’ Generation

Bada won the Lee Seung-chul special of Immortal Song 2 with her cover of the artist’s song “Girls’ Generation” which is the song her hoobaes at SM Entertainment, SNSD, were named after (they also sang a cover of the song). It was an awesome performance by Bada and definitely deserving of the win–the fans boys backstage screaming when she took off her jacket mid-performance was pretty funny, too.

Although at times a little bit too contrived in setting up certain situations, Monstar is shaping up to be a pretty good little K-drama.  I’m really starting to enjoy the drama and am totally bummed that it is shown only once a week and will be only 12 episodes long. The lead actors BEAST‘s Yong Jun-hyung, Ha Yeon-soo and Kang Han-eul and the rest of the cast are doing a great job of bringing the story to life.  Last week’s episode 3 revealed a lot of the character’s back stories including the one between Min Se-yi and Jung Sun-woo–the characters in this K-drama sure have active imaginations. We all knew that the cold and perfect class president didn’t become a caring and gallant boy overnight for any old transfer student. Loved the way they set up his flashback and back story with Se-yi, too bad he’s probably not going to get the girl.  Ah, first love–so beautiful yet so painful most of the time.