The Cute Side of Boyfriend Returns with "On & On" 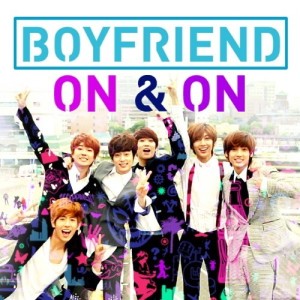 Boyfriend, that sweeter-than-candy boy group produced by Starship Entertainment, has returned with a new song, “On & On.” Despite their recent endeavors toward the darker and sexier side — see “Janus” and “I Yah ” — they’ve returned to their cutesy roots for this song and MV. It’s somewhat ironic, considering the fact that their song carries the same title as VIXX’s previous single — the concept for that music video was anything but cute. Most definitely, it was nice seeing Boyfriend doing “manly” songs for a nice change, but their boy-next-door image is what they’ve been known for and it’s not a real surprise that they’ve returned to it.

The thing about Boyfriend as a group is that they occupy their concept niche extremely well. The sweet, innocent boyfriend act may not find wide appeal, but there’s no denying that the members pull it off. Boyfriend is just one of those K-pop groups that aren’t for everyone and there is nothing wrong with that. Their company has groomed them with a specific image and their efforts combined show that they have it down to a science.

One of Boyfriend’s talents is seamlessly integrating their scripted cuteness into natural likability. If you watch variety and reality programs featuring the group, you learn pretty quickly that their innocent image isn’t contrived and that works in their favor with the silly, sweet concepts in their music videos. In this MV, they add the nice touch of having the lip-syncing of the song integrated into the drama of the clip. The best example of this is when Minwoo is in the photo booth; it looks like he’s having a normal conversation with Donghyun whilst “singing” the lyrics, and this fits with the “unscripted” tone of the MV.

I say “unscripted” because we all know that the MV, like variety shows, is trying to appear spontaneous even though it isn’t. This is a concept in and of itself, just like the ‘sexy’ or ‘aegyo’ themes, and Boyfriend accomplishes it. The interactions between members, the water fountain pranks, and the constant smiling don’t come across as fake, but seem rather like a bunch of light-hearted boys playing together. 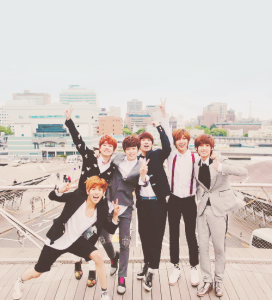 Unfortunately, the scene in the hotel room doesn’t seem so flawlessly executed. Honestly, given the setting, there seems to have been no other way to make this look more natural. I’m sure the members wake each other up in their dorm but I’d also bet money it isn’t by tickling each other’s feet. Likewise, it seems unlikely that Minwoo spends a lot of time causal yawning on a balcony, or that the members haven’t seen Hyunseong without his shirt on before. One scene is a small complaint, however, considering how natural the rest of the MV feels.

Although it wouldn’t have fit with the “unscripted” concept, I’m disappointed by lack of choreography in this MV. The only reason this stands out is because Boyfriend has a tendency to be above average with their dances, even for their cute songs. They are always perfectly in-sync and their choreography tends to be unique instead of the standard crotch-focused boy group fare. Obviously, dancing isn’t the point of this MV, and it doesn’t do any good to lament it now. This type of concept focuses more on the members and their personal charms, which appeal to long-time fans. To put it another way, the focus is not on their movement and coordination.

Thank goodness Boyfriend has put away the floral suits (even if every other K-pop group seems to have picked them up), though. The darker, manlier wardrobes in “Janus” and “I Yah” were refreshing for the group, but the clothing in this MV feels like a much better fit. The style is best described as preppy, stretching to dandy boy, and is characterized by muted colors, a different tone to the pastel or neon we often see in K-pop. Since the video is shot in public, and is meant to have a natural feel to it, having outrageous outfits would have been out of place. 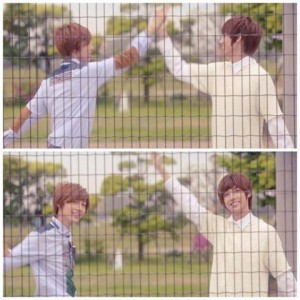 The causal suits, sweaters, and sneakers fit the outdoor setting and look like something your normal boyfriend might wear, which after all is Boyfriend’s original concept. That is, of course, if your boyfriend has access to cute whale sweaters and is willing to wear them without questioning his sexuality. It’s a look that Boyfriend’s leader Donghyun pulls off surprisingly well. I’m a sucker for boys in sweaters in general, so my affinity for the style in this MV may be slightly biased, but it is still better than floral suits regardless.

In the end, this is a cute MV with lots of cute moments of the guys. It doesn’t go deeper than that and it doesn’t try to pretend it is something it isn’t. This is quite entirely refreshing, even if a cutesy boy group MV isn’t anything new or different in K-pop. “On & On” is a safe release by Boyfriend, but it is also the style they’ve had since the beginning, so it doesn’t feel like a cop-out. The group took some pretty big risks with their recent Korean releases; it isn’t surprising that their company has decided to go back to Boyfriend basics for a little while.

Undoubtedly, If you like Boyfriend, “On & On” is going to be right up your alley. If you like fun and cute concepts for boy groups, this is likely to please you too. On the other hand, if this style simply isn’t your cup of tea, that’s all right. They were clearly targeting a specific audience with this release and hopefully those people are happy with it.