Hyosung in Hot Water Over Slip of the Tongue 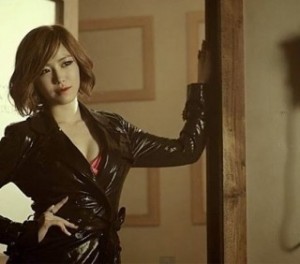 Looks like T-ara N4 can breathe a sigh of relief and rest easy for a New York minute — for once, a fresh girl group scandal has managed to make netizens temporarily forget how much they hate them (although the “hip hop” clothes they wore for their meeting with American rapper T.I. are not doing them any favors, and someone should let them know that they look ridiculous). I’m sorry to report that the new Netizen Target of the Week is none other than Secret‘s leader Hyosung, who has enraged fans and non-fans alike with an unfortunate slip of the tongue during a recent radio broadcast of Choi Hwa-jung’s Power Time on SBS Power FM.

As we know, K-pop stars are notorious for saying things that they “didn’t mean” (see: Taeyeon announcing over radio that Alicia Keys was “pretty for a black girl,” Leeteuk telling Suzy to lose weight, Shindong unbelievably berating fat girls, Teen Top‘s C.A.P. declaring that he would beat his daughter and lock her up while showering his son with whatever he wants, etc), but Hyosung’s image might take a pretty severe beating after this one. However, taken out of context, netizen outrage over her remarks may be a bit difficult to understand.

So what happened exactly? On the aforementioned radio broadcast, Hyosung unwisely used a not-so-good expression to talk about the way SECRET deals with internal group dynamics. While talking about the importance of each member’s individuality, Hyosung said, “We respect each member’s individuality, so we don’t force democracy on the group.” If that phrasing seems a bit odd to you, that’s because it actually is; the Korean expression that Hyosung used for the latter part of that sentence (민주화 시키지 않아요 / minjuhwa sik’iji anayo) is actually a negative expression that makes light of the concept of democracy and uses it to refer to the suppression of individuality or forcing others to conform to a standard model. In other words, minjuhwa sik’iji anayo essentially implies that democratization is a bad thing because it forces conformity and robs a society of the right to individual expression. In and of itself, the word minjuhwa (democratization) is not a bad one at all, but using it with the verb sik’ida (to order) is incorrect from a grammatical standpoint and totally disrespectful from a societal standpoint. By using that particular expression as a counterpoint to her original statement that SECRET as a whole respects the individuality of its members, Hyosung looks ignorant and, quite frankly, stupid.

But looking stupid isn’t the worst of Hyosung’s troubles. Most unfortunately, the expression minjuhwa sik’iji anayo is commonly — and generally exclusively — found on the internet forum Ilgan Best (more commonly referred to as Ilbe), a conservative (ahem) website whose users are best known for being excessively right-wing, misogynistic, and horrible. Ilbe users have quite the poor reputation among most Koreans; while the average netizen comment can often be harsh and disrespectful, Ilbe users tend to take it to the next level. Most importantly, many of them express extreme conservative political viewpoints, such as that South Korea ought not to have democratized and should have continued to exist under a military dictatorship (a la that of polarizing former president Park Chung-hee). Understandably, this is a minority viewpoint in South Korea, a country that fought long and hard to achieve both independence and democracy, but the point stands: because Ilbe users aren’t huge fans of democracy, their use of the word would be tinged with negativity. Hence the expression minjuhwa sik’iji anayo — to force democratization. 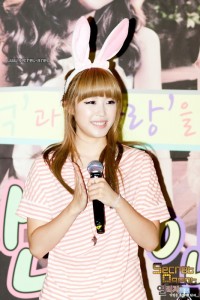 So let’s recap: Hyosung uses an incorrect expression that both paints democratization in a negative light and just so happens to be an expression found commonly on one of South Korea’s trashiest forums. Logic might suggest that Hyosung herself is an Ilbe user, which seems slightly farfetched, if only because Ilbe isn’t necessarily the best place to be if one is a woman; however, if Hyosung isn’t an Ilbe user, she’s still an idiot for using a dumb expression without properly understanding it. Neither outcome is ideal.

Oh, but it gets worse: not only did Hyosung seem to speak negatively of democratization, but she also did it only a few days before May 18 — the anniversary of the Gwangju Democratization Movement, an uprising in Gwangju, the capital of South Jolla province, that lasted roughly ten days and symbolized the human cost of freedom and democracy.

The story is long, but in a nutshell, the city of Gwangju rebelled against the military dictatorship of Chun Doo-hwan (Park Chung-hee’s successor), and the uprising was violently put down by Chun’s government. 2,000 people are estimated to have lost their lives in the movement. May 18 is a national holiday and day of remembrance in South Korea, and many television broadcasts plan some sort of special event in order to commemorate those who participated and died fighting for what they believed in. Hyosung was scheduled to appear in Infinity Challenge‘s upcoming episode surrounding May 18, but thanks to her carelessness, viewers are calling for her removal from the program. It’s hard to cast blame here; the Gwangju Massacre is an extremely sensitive part of South Korea’s history, and democratization was the result of a hard fight that was not easily won. If there is even the slightest suggestion that Hyosung somehow doesn’t appreciate the democracy that those that have gone before her died to achieve, then why should she deserve to appear on television programs that aim to celebrate it?

Honestly speaking, you have to feel a little sorry for Hyosung these days; SECRET’s latest round of promotions for the summery single “Yoo Hoo” has hardly been easy for her. Following a harsh diet and exercise regimen that led to five kilograms’ (~11 pounds) worth of weight loss, Hyosung was slammed with criticism from every angle for (and I can’t even believe I’m about to type this) losing her curves along with all that weight. It would seem that one can’t really win with the K-pop weight loss monitoring machine; while most stars (read: female stars) with fluctuating waistlines earn derision for gaining weight, Hyosung’s weight loss has come at the expense of her ample (and much beloved by male viewers) bosom. So great were Hyosung’s assets that they earned her a gig modeling lingerie for popular brand Yes. Now that she appears a little less well-endowed than she was before, (male) fans have taken to the internet to express their displeasure. How dare she rob them of her large breasts? That was the only good thing about her, right?

Dumb isn’t the right word, but let’s just say that Hyosung probably heard or saw that expression somewhere and didn’t really bother to question where it came from or what it might imply. You can blame the South Korean public school system in part (or maybe blame the fact that Hyosung’s school attendance was probably overshadowed by her training, either official or unofficial, to become an idol), but this probably all boils down to a simple misunderstanding on Hyosung’s part, as well as general carelessness. The best analogy I can come up with in this case might be a child hearing a swear word and repeating it without understanding its meaning. Or, if you’re a fan of my favorite old cartoon, Pepper Ann’s use of the non-word “frasny.”

Actually, in this particular case, Hyosung probably didn’t mean it, but she really, really shouldn’t have said it.

So how long will the storm take to subside? That’s anybody’s guess. I’d wager that this one will follow her for awhile, but that people will eventually just drop the Ilbe association and accept the fact that Hyosung made a serious mistake by not investigating expressions that she doesn’t fully understand. What do you think, readers?