Highlights of the K-pop Dream Concert 2013 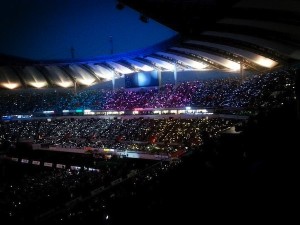 The 19th edition of the K-pop Dream Concert was held this weekend on the 11th of May and featured a line-up of 22+ acts, junior and senior: 2012 rookies BtoB, VIXX, EvoL, SPEED and EXO joined established acts SNSD, B2ST, SHINee, KARA, Boyfriend, 4Minute, SISTAR, INFINITE, B1A4, SECRET, 2AM, U-KISS, ZE:A, Rainbow, Girl’s Day and soloist Huh Gak. Sub-units ZE:A5 and uBeat also performed, and T-ara N4 made the list, too — but more on that later.

With the large number of K-pop acts presented and its backing from the South Korean Government, the Dream Concert is seen as the biggest K-pop concert of the year and is used as one of the main advertisements for Hallyu’s spread internationally — the event is known to attract a number of attendees from overseas. In fact, international fan attendance (mostly from other parts of Asia) in 2011 was up to a tenth of local attendance figures.

The concert will broadcast later this month (on the 22nd, to be precise) on KBS; but before then, here are some of my highlights from this year’s Dream Concert.

This is not a cop out: all groups did their best, but it’s only fair to give credit where it is due. That the audience of a K-pop concert was well behaved should be the norm rather than a rarity; but considering the reputation K-pop fans (and really, youth in general) have amassed, the Korean press was within its rights to praise this year’s crowd for their good behaviour and generous support of all artists. Most of the attendees weren’t familiar with all of Rainbow’s songs, but everyone adorably cheered for the opening group when they performed their latest single “Tell Me Tell Me.”

Rumours of a black ocean for T-ara N4 swirled on the internet and even started trending on Twitter, but it was soon discerned that those seated on the ground (where the black ocean supposedly took place) did not have lightsticks at all; the fans who did have them were seated higher up and all kept theirs on during T-ara N4’s performance. Sure, there wasn’t as much cheering during the actual performance with only SPEED’s Tae-woon garnering any noise with his appearance, but there was a positive response at the end, and no booing; with T-ara not being the most loved group right now, it was easy to expect worse, and as such for news of a black ocean to seem probable; but luckily, this time the audience proved that they were better than that.

Most Unexpected Version of “MAMA:” who else, EXO

Very little was expected of SM‘s once-prodigal 12-member boy group at chez Gaya other than yet another remix “MAMA” (which I probably wouldn’t remember) and yet another failed attempt at synchronised bowing. To differentiate from last year’s stage, EXO-K was joined by its Chinese counterpart EXO-M, causing many new cases of eye bleeding at the sight of Lay’s new hair. “MAMA” started off as usual, with EXO-K taking the first verse as is tradition on Korean soil; EXO-M comes on stage and just as you are preparing for some winking Kris, SM decides to instead add a Kai–Lay mini-dance break and breakdown from D.O. and Baekhyun before launching into the screamo. Admittedly, it was well-handled and definitely something different. And the group’s other song, “History,”  featured more EXO-M as it was performed in the usual OT12 fashion, thus restoring balance to the world. If only they had been allowed to sing live, this could have been a decent performance.

BtoB looked adorable in their preppy pastel suits (though I’m not sure about the mint sweater and cobalt shorts…), but what was even cuter was their short and sweet introduction to “Second Confession;” ladies in white dresses presented each member with their own second confession (and Sung-jae rejected all offers). BtoB’s normal choreography only features the seven members, so including the back-up dancers for this performance brought something new to an already strong performance; and the girls’ bows only added to the whimsy.

Speaking of outfits, almost everyone stuck to the black and white styling that’s been prevalent in recent events and is boring as bread, with red being the hue of choice for accents. Most groups wore the outfits pertaining to their most recent release, but stylists for SNSD, who was slated to perform both “I Got A Boy” and “The Boys,”  decided to instead mesh together both styles of costumes, resulting in this black, gold and red ensemble that I can’t help but love.

Being the most prolific idol group in attendance, SNSD were the last to perform; luckily, the pre-show red carpet gave us a sneak peek of their attire (sans Sooyoung‘s, who joined the group later on-stage). The girls kept the crop tops and tights from their IGAB outfits, but wore more fitted clothing and lots of gold accessories in order to mix in the royal look from their “The Boys” days; and Tiffany even reverted to her hair from that era, while Sunny sported the cutest ponytail. It’s an unlikely combination, but the colour scheme definitely helped tie the two very different aesthetics together. The heels worn for the red carpet worried me, but SNSD showed that they were more practical than I give them credit for and switched to runners and combat boots for their stage.

In addition to the dance cover opening act, there were two special stages for the concert: ZE:A’s Min-woo, Dong-jun, Hyung-sik and Kevin teamed up with Girls’ Day to perform Cool‘s “Sorrow” while SISTAR’s Hyorin and 2AM’s Changmin belted out “When I First Saw You” from Dreamgirls. And honestly, neither of them interested me: the first lacked life and the second lacked chemistry. In the end, though, the latter won out thanks to Hyorin’s simple but magnetic outfit, which really suited her skin tone and really popped against the pretty purple designs being displayed on the stage.

Best Ending: No Prizes For Guessing

Yes, thumbs up for you too, SHINee.

Readers, what were your highlights from this year’s Dream Concert?