When it comes to their promotional singles, 4Minute really love the dark side of things. First bats and vampires in “Volume Up,” and now zombies for their latest, “What’s Your Name”. Concept aside, how does the rest of the song (and the music video) stack up, and would we feel like giving the girls our name when they are done with it?

[youtube http://www.youtube.com/watch?v=H-IJWqIHioA] The song opens with layers of synthesized beeps and beats, before the “Brave Sound” announcement comes in. In many ways, this is exactly what we have come to expect of the Brave Sound. An assortment of electronic sounds and autotuned vocals, none of which that seem to subscribe to any sort of musical theory, and has a hook that is equal parts annoying and catchy. 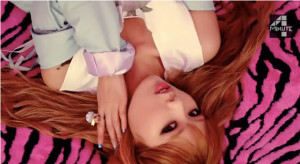 Another Brave Brothers staple: Excessively sexy dance moves. In keeping with their whole “harder and louder is better,” the most dance friendly parts, or the most synthesized parts of the song, get accompanied by copious amounts of members posing sexily or complicated hip-shaking and hand flailing moves. And of course, the by now very obligatory sexy Hyuna solo shots.

After the Brave Brothers overdose in the first 30 seconds, the song settles into a more measured groove for the rest of the stanzas, before laying off the vocal processing for the parts leading into the chorus, and then getting back on the auto tune for the chorus, with a reasonably catchy hook and some hand movements that are not too hard to follow.

If it all sounds like too much, the end result is far simpler than that. Think along the lines of SNSD’s “I Got A Boy” but with a far more linear structure and less experimentation, and with all the audio effects turned up to another level.

The similarities to “I Got A Boy” do not just end at the musical level. There is also the pink telephone scene at the start of the MV, as well as the street scenes which employ largely the same colour schemes. A few major difference though: “What’s Your Name” is far more gender-neutral, the street scenes do feature a nice mix of male and female back-up dancers, and it helps the whole thing not 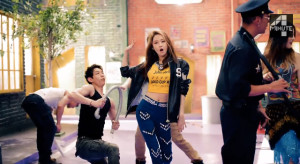 fall into a pattern of “said girl/guy group are the only people in MV land.”

Plot-wise, the song largely sticks with the tried-and-tested 4Minute formula of Music Video stories. The girls hang out together in a
room, receive a phone call, and then head out to a party. There is some dancing in the street, possibly because they are too eager for it to start, and being a Brave Brothers work, the music video will feature a dressing room scene. However, apart from an utterly random butt shot, the scene does not amount to much.

Just as one thinks this is going to be another run-of-the-mill music video, the zombies finally appear. While 4Minute attempt to make an escape of sorts from the room and into the street, their (apparently) half-hearted attempts mean that they get caught rather quickly and end up leading the zombies in a mass dance. So far from being the main selling point in the Music Video compared to 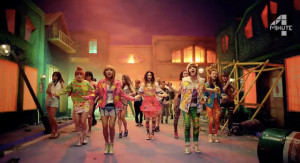 the vampires in “Volume Up,”  the zombies at best are just an interesting diversion to the basic plot.

Summing up, there is a very good reason why this 4Minute comeback was scheduled for this period of time where girl group comebacks are fewer. While the resulting effort makes for reasonable listening, and fans of either 4Minute or the Brave Brothers sound will find little to complain about, there is little for those who seek a bit more. 4Minute appear to be treading in overly familiar or repeated territory with this single, and the music video at best is just a gimmick or two thrown into something we’ve all seen before.