Feel the uBeat of U-KISS 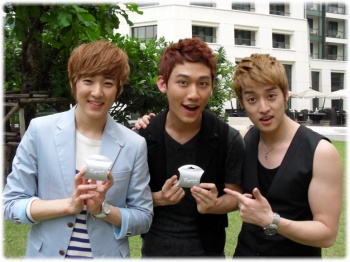 Well my my, aren’t subgroups just all the rage lately? And the most recent K-pop group to jump onto the bandwagon happens to be U-KISS. In all honesty, I would have never pegged U-KISS to be the kind of group to really invest in subgroups — if only because after the departure of Kibum and Xander, NH Media seemed to put all their money into renovating U-KISS as a band. Despite average international success, U-KISS has never been particularly noted in South Korea, so it makes sense for NH Media’s initial priority to lie in progressing U-KISS’ status as a group. Nonetheless, they seem to have shifted focus with the announcement of a new subgroup ‘uBeat‘, simultaneously consisting of both an unorthodox and conventional choice of members: Eli, Kevin, and AJ.

The choice of members is conventional in the sense that Eli, Kevin, and AJ have promoted as a trio on shows before. As the three English speakers of the band, the three of them have MC’d for M!Countdown in Tokyo, as well as starred in Serri’s Star Kitchen on KBS World. After Xander’s departure, AJ has effectively taken his place as the “third English dude”. This sub-unit is definitely very internationally accessible and I can see NH using them to connect to U-KISS (much larger) foreign Kiss Me fanbase.

However, the member choice is unorthodox in that only Kevin can really be considered a good singer. Eli’s raps are comical at best — but then again, AJ is really only at his best when his raps are placed in contrast with Eli’s terrible. Either this is going to become a Kevin show, much like his solo song ‘Mad‘ (“feat” Eli), with AJ and Eli contributing the occasional note and a rap here and there. Or it’s going to be in the same structure as ‘0330’. My instincts tell me it’s most probably the latter, which I’m not completely abject to considering just how pretty 0330 was when it came out.

The three of them have teamed up with Brave Brothers for their new single, who helped turn them into a K-pop meme back in 2009 with ‘Man Man Ha Ni’. Personally, I’d much rather they work with Ryan Jhun. Who, despite his questionable personality, is an incredibly talented producer, and seems to really know how to optimally use U-KISS’ voices. That being said, Brave Brothers does know how to make a pop hit, and he has his moments. It’s hard to see NH Media taking a step back into U-KISS’ sound pre-AJ/Hoon when they’ve come so far now.

So what do you think Seoulmates? Are you looking forward to this new sub-unit?