Side B: Little Sistar Growing Up

When Sistar was formed in 2010, the Starship Entertainment group had lots of competition from more-established groups. Since then, however, Hyorin, Bora, Soyou and Dasom have defined a consistent and marketable sound while allowing for some extraordinary musical experimentation. Led by Hyorin’s strong vocals, the group has released singles ranging from mid-tempo ballads to electropop dance tracks and breezy summer fare. A look into their B-sides and album tracks reveals an even more impressive array of nuanced ballads and empowering dance hits that stretch the group emotionally and vocally. 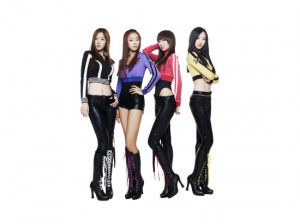 The opening track of most K-pop singles does little more than set the mood. While “Here We Come” certainly establishes the boastful lyrics and nuanced hip-hop beat that permeates through debut single Push Push, it made the list because of how completely it oozes with Sistar’s ethos. The track moves effortlessly between hip-hop and electro pop motifs, dropping marketable hooks with every musical shift. The track packs the needed punch and defines the sound of the group in a little over a minute.

Also from their debut release, the R&B styled “Oh Baby” uses subtle harmonies and slow rhythmic raps to tell the story of a one-sided love. The tale unfolds gradually, as the track adds voices and musical styles that give the song a dynamism missing from most mid-tempo ballads. The instrumentation is driven by a layered hand-clap beat that is purposely messy and arhythmic to give the song the feel of a track improvised at a recording studio. As it is predominantly a rap song, Bora gets pushed to the front. She absolutely nails it, though she’s only improved since then. “Oh Baby” rounds out Sistar’s first single with a track that’s slow, subtle and full of emotion. 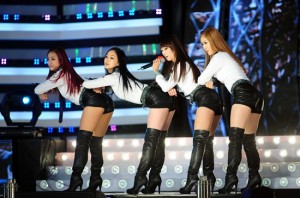 By the release of third single, How Dare You, Sistar had successfully defined themselves as the musical midpoint between the sounds of KARA and 2NE1. Yet while Hyorin was starting to get much-deserved recognition for her vocal talents, the group as a whole was not known for having outstanding singing or dance skills. The group sought to change this with “Over,” a song that was created to be performed live. With many dance breaks, and a dubstep-driven rhythm, the track gives ample opportunities for both traditional hip-hop skills and the more sultry gyrations that would come to define the group. Musically, the group experiments with a song that gradually grows more discordant, giving the track a dark and uneasy feeling that befits the song’s emotion. The lyrical motif of this single was “Mighty Sistar,” and the group definitely tries to live up to this name with their vocal and dance skills.

Sistar have always been a little edgier than your average K-pop girl group, but they’ve also gradually embracing the more mainstream, saccharine image. “New World” a track off their first studio album So Cool bridges the girliness of bubblegum pop with strong, girl-power lyrics, making an otherwise nondescript song unique. The instrumentals are warm and orchestral-driven and work particularly well as a contrast to Bora’s rapping. Soyou isn’t Sistar’s strongest voice and she’s not given a lot of lines in “New World”. However, her bright vocals during the bridge really help the song build towards the chorus. My only complaint is the weakness of the post-chorus section, which overuses vocalizations and doesn’t add to the swelling dynamics of the song. Still, it’s a peppy track that was arguably the strongest new track from their first album. 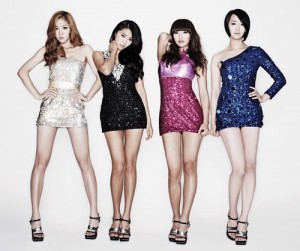 The other stand-out from So Cool is “Follow Me,” another bright track with a swing beat reminiscent of Broadway, of all things. The instrumentals are minimal, strongly driven by a guitar and handclaps complementing the vocals. The track builds to a distorted rap in the bridge before absolutely exploding in the chorus. Of course the stand-out for this song is the impressively high notes that Hyorin hits seemingly with ease. This is one of those tracks I wish was performed live more often just to watch Hyorin nail those notes, but listening to a recorded version is still quite the aural experience. While it’s not the nuanced performance of Sistar19’s “Gone Not Around Any Longer,” sometimes it’s just nice to hear Hyorin’s belting at it’s most triumphant.

The first of 2 EPs released in 2012, ALONE established the sultry and adult image of the group. While most of the coupling tracks charted, standout ballad “Lead Me” managed an impressive 27th position on Korea’s GAON charts. Strongly channeling subunit Sistar19’s debut, the ballad takes advantage of all 4 members by having their voices interact throughout the song. Sometimes it’s the call and response between Bora and Hyorin, sometimes it’s Hyorin’s subtle vocalizations under the chorus’ harmonies, and sometimes it’s the smooth harmonies that underline the emotion of a solo line, but the blending of voices is particularly noteworthy here. While Hyorin absolutely dominates the song, Soyou’s breathy vocals in the verses provide texture and add to the song’s dynamics. Sistar has released very few traditional ballads, but given the lovely sounds of “Lead Me,” they are certainly successful when they do. 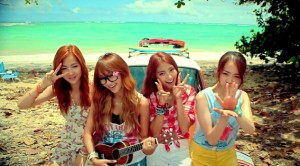 Sistar’s latest release was the summer EP “Loving U”, which went the way of many K-pop groups with bright lyrics and major-key instrumentation. “Holiday” is a B-side that starts with simplistic guitar chords, underwritten by soft piano accompaniments — it’s immediately unrecognizable from your average Hilary Duff song. The chorus embraces a similar girly aesthetic, but between these bubblegum-scented bookends, the group experiments with rhythms and harmonies that nudge forward a well-worn genre. While it’s little more than a hook, the group performance of “pop it rock it work it drop it” during the second verse really stood out for me. “Holiday” is a track that is subtle enough to be engaging without distracting from the beach party aesthetic that makes for easy listening.

Currently, Sistar19’s 2nd release is still tearing up the K-pop charts, but it’s almost certain that we will get a comeback from the group within the next year. Sistar have gone from one of many 4-5 membered girl groups to a contender that could soon challenge for one of the top spots. The breadth of their discography only further demonstrates how ready Sistar is for girl group domination.

I hope you’ve enjoyed this edition of Side B. Leave a comment and let us know what you think!