U-KISS's New MV is a Standstill 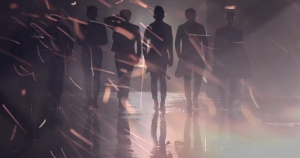 U-KISS is back with their third Korean studio album and their new single, “Standing Still”. As a KissMe convert during their “Neverland” Era, who has enjoyed almost all their releases since (let’s just pretend “Gangsta Boy” wasn’t a thing), this was good news for me. Especially since it came with an extra gift – the return of AJ, who had been spending the past few months at Columbia for the fall semester of his freshman year. And every U-KISS release comes with the eternal question: will this be the one that wins that #1 award?

Honestly, judging from the song and music video alone, probably not.

After a series of notable singles, from the powerful dance track “Neverland”, to the grittier “Doradora”, and again to the smooth R&B that was “Stop Girl”, “Standing Still” is a little more of the standard electropop U-KISS did in the past. Though a little underwhelming, it probably would’ve worked well with a great music video. And the video itself starts out promising – the visual effects in the intro intrigue with all its rapid shots of the set and a mysterious girl, as well as the bright flashes of the U-KISS members.

But the flashy sequences prove to be too much as the video progresses. The frequent blurring and then focusing on the boys get old quickly, and the duplication of members during certain lines looks a little tacky. Choppy camera movement in the boys’ individual close-ups also prove disorienting, especially when combined with the flashy lights and frequent lens flare effect (in the garage scene). The repetitive shots of the girl come as the most obnoxious parts of the video, as there is no apparent interaction between herself and the members — what is the purpose of her role when her character doesn’t meld with the roles of her leads? Apart from jumping out at the viewer with bright green, and might I add, scary, contacts, there seems to be a disconnect here. Up to this point, this MV experience has been reminiscent of one flipping channels between a boyband music video and an eerie photoshoot of a random girl — if that ever happened. 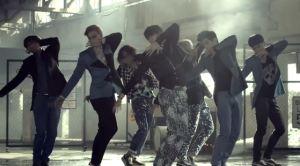 While the visual effects disappoint, the choreography doesn’t exactly make up for it either. The U-KISS I know has some pretty powerful and intricate choreography, and they’ve been capable of delivering simple concepts (like “Stop Girl”) with intensity. “Standing Still” feels a little empty in comparison, especially since the chorus, which I fully expected to be the climax in the choreography, mainly consisted of the guys running their hands all over their body. Other parts of their choreography look slightly more pulled together, but I think we could do without the ‘slow-posing’. Also, I can easily pick out my favorite move — the shuffling, or so-called “point dance”, in the last half of the chorus — but it resembles a less intense version of the footwork in “Doradora”.

Overall, the music video isn’t terrible, but it’s left me going “that’s it?”, and I haven’t felt that way about a U-KISS video in a very long time. With that in mind, I’d give it a 2.8/5. And as for that #1 award… maybe next time (though I’d be thrilled if you proved me wrong).