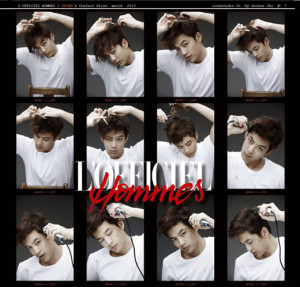 We’re half way through the month of March and half way through the slew of K-pop comebacks, too. A couple of things that just missed the cut: Jung In‘s comeback MV for “Those Obvious Words” starring Tiger JK and Jo Eun-ji, the release of a Running Man manhwa, this pic of Jaejoong that he might have mistakenly uploaded to Twitter, and Se7en‘s last photo shoot from L’OFFICIEL HOMMES where he shaves his head in preparation of his enlistment.

The following are the top 5 Things in K-pop that happened last week that I think were a bit more special than the rest. If you’re not up-to-date on your K-pop and don’t like spoilers–go no further because spoilers may lie ahead.
5. 2AM’s Changmin ‘Twinkles’ on 1000 Song Challenge

2AM‘s Changmin was partnered with MBLAQ‘s Seung-ho on the latest episode of K-variety show 1000 Song Challenge. During one of the rounds they picked the famous trot song “Shabang Shabang” by Park Hyun-bin.  During the performance,  Changmin showed just how he could ‘shine’ with the song.

4. Learning the Art of Seduction

SS501‘s Heo Young-saeng makes his latest solo come back with the mini album Life and the MV for the title track, “The Art of Seduction.” It’s a good song–I really believe Young-saeng has one of the best voices in K-pop–and the MV is fun, yet slightly disturbing.

The kids of Dad! Where Are We Going? spent a little time with one of the grandmothers hosting them on Jeju Island to learn a little about some of the sea creatures caught there for food. Grandparents have a lot of knowledge and experience to share and it was cute to see the kids interacting with the grandmother.

It was time to say  good bye to the Raccoon Boys as they got eliminated form K-pop Star 2 with their performance of “I’ll Be Missing You.” It wasn’t the boys best performance ever, but it still was sad to see this talented trio leave. My fave performance of the night was the Top 5 special performance of Michael Jackson‘s “Billie Jean.”

The cast of Infinity Challenge aren’t exactly known for their good looks, but the images created of themselves for this game during the last episode would be hard for even a mother to love.  There’s a bonus at the end of the clip–a teaser of Infinity Challenge’s next episode in Hawaii! There was a lot of interest in the episode since the cast and crew were being so secretive about what exactly their missions would be while in Hawaii and from what can be seen in the clip–it’s looks like they had an extreme experience while in the Aloha State.