Teen Top Doesn't Have Much Direction with "Miss Right" 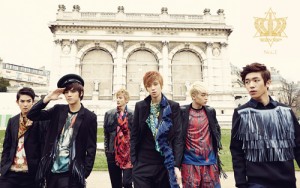 Coming straight off their European tour, Teen Top makes a comeback with their first full-length Korean album, No. 1. The teaser from prior to the album’s release led me to believe that I would be watching the boys show off their toughness in dilapidated jail cells and construction yards while wearing tacky orange jumpsuits for their “Miss Right” MV, which did in fact occur… for about 20 seconds. This couldn’t mean anything else except the fact that those viewing the MV were duped yet again with a teaser that did. in fact, tease.

So instead of the classic K-pop boy band-dancing-around-being-tough music video we got the classic chase-after-the-same-girl-in-bright-environments music video instead. And while it doesn’t make for a really outstanding comeback MV, it’s still a nice reintroduction to Teen Top and for those who know and follow them, a good reminder of what they’re good at.

The first sound of the actual music video is a howl, and it sets the stage for the idea the boys are on the hunt for their prey, clearly the female lead. However, the boys don’t do much when they’re given their chance to chase the girl with the long flowing hair. The first scene with all of them in the locker room being rowdy and confident (and howling again) is a contrast to the very next scene of them all being love-struck in the classroom upon seeing her. They all takes turns gaping at her flip her hair before they are all given jumpsuits to do what I’m assuming is some community service. 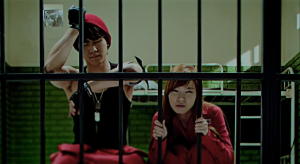 How C.A.P and the lead girl end up stuck in a jail cell together is beyond me but that is, in fact, what happens in the next scene in the story. While he peeks over at her from the top of the bunk bed they are in and cleans the cell, they still both fail to get the keys that are right outside the cell bars. Ricky is next and helping her cut a piece of wood. There’s nothing really to focus on here, he really just helps her cut a piece of wood and gives her a thumbs up after.

Chanjo tries the more suave route as he throws his water-soaked jacket over a smoking engine of a car, and climbs the hood to sit with the lead girl and play with her hair. Then there’s Niel who’s the first to get a little romantic interaction with her and as they dance together. Of course, she pushes him away before they kiss.

It’s sad that the next member’s interaction with the girl — while I thought was going to be the funniest — turned out to be very creepy, to say the least. As the girl walks into the locker room, Chunji is sitting in a chair pretending to be blind. Now if you know where this is going, you should have some questions pop in your head like “Why would he be in what I would assume is the girls’ locker room” or “Why doesn’t she tell him to leave” or even “She’s not really going to change in front of him?” But of course, she does, to which Chunji reacts with shocked delight a few seconds after she’s gone. And then L. Joe ends the single member scene with the girl as they clean spray paint off walls and share a kiss blocked by gas mask. It doesn’t really get more romantic than that. 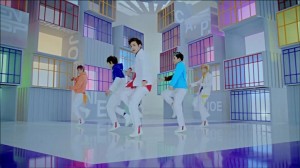 Our last scene is of all of Teen Top and the female lead stuck in a jail cell again and having a pillow fight. While there were laughs and giggles and the MV had the potential to be really interesting, there were elements that made it also come off as a little boring. All the members’ one-on-one scenes with the girl are laced between the group shots of them dancing their choreography in two different sets, one really dark construction yard and the a other really light and glossy set design, which of course their clothes match. The styling in “Miss Right” doesn’t take any more risks than the average K-pop boy band. Most of the members are given pops of color in their hair and the use of any extravagant jewelry pieces is limited. The most interesting clothing detail seen is really the fringe on their jackets.

I did like the choreography of the song; the Michael Jackson-esque moves were done without error by Teen Top and Changjo does pretty well with the small dance solo he had. The flailing hand wave during the “La la la la la la” portion of the chorus though is questionable, especially given the beaded gloves they were given for it.

“Miss Right” doesn’t have the shadowy tones and storyline seen in their earlier music video, “I Love You” or the flashiness of “Be Ma Girl”. Even before fully finishing the music video, I was hoping for at least some of the energy I felt from “Supa Luv” but I didn’t get any of these things. It’s just a decent MV: there’s decent choreography, a decent storyline and decent editing, but nothing else. Despite the widespread color of the sets and styling, the overall effect was unfortunately really bland. For this MV, I’m giving it a 2.2/5.

What do you readers think about Teen Top’s “Miss Right?” Let us know below!