SISTAR19 Will Not be “Gone” But Will be “Here For Long” 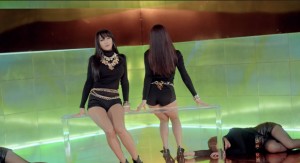 Despite my reservations over SISTAR19, which clearly played on the popularity of its main group’s most prominent members, the success of “Ma Boy” meant that a follow-up release was inevitable. So, with their latest single “Gone Not Around Any Longer”, K-pop fans appear to be getting the same vocal-rap mix laid over a Brave Brothers tune, and a music video with some sexy moves and a minimalist set.

Apart from the grammatical error in the song title, does the song give us what we want from SISTAR19, or is the formula a tad stale now?

Song-wise, the tune does not differ much from Brave Brothers’s recent work for SISTAR. While the tune makes for pleasant listening and is less of an electronic aural assault (unlike SISTAR’s earlier releases) — albeit over time — there’s also very little that marks it out as uniquely SISTAR19.

Another anomaly of this Brave Brothers track: a seemingly 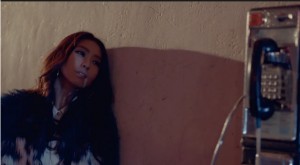 polished sound and hook (a gentler saxophone instrumental), a la Beast‘s repertoire, is at first quite difficult to decipher, and also rather tricky to remember. This is in contrast to “Ma Boy”, which had a memorable beat and a catchy dance move.

The lyrics are also largely straight out of the “how-to-write-songs-about-being-out-of-love guidebook”; the song centres on the topic of mental imprints left by a lost lover. The theme is very nicely reflected in the early parts of the music video, where we are shown literal interpretations of the lyrics. An example would be the line: “The pictures in the frame were here then gone”. The clip then cuts to a scene of a picture in a photo frame fading away.

Other examples of lyrical metaphors being interpreted would be a scene of Bora sitting next to a payphone listlessly and Hyorin reminiscing of past events in a bathroom.

The rest of the music video tended to play out like SISTAR videos past: cube-like neon-lighted sets, with army of back-up 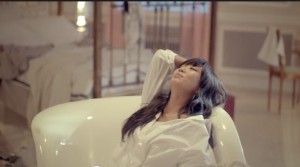 dancers (a duo group often equates to a lot of empty space) and emotive posturing next to random objects.

There’s also the SISTAR staple of sexy body waves. While the moves do appear overdone after a while, I’m going to stop ranting about them. After all, this brand of synthesised sexy has become very much a part of their identity. And maybe because of its frequent presences, I’ve become desensitised. As much as I’m numb to this, something must be said about the incongruence of a body wave in a song that talks of pining and loss. No? 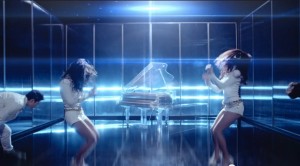 nice break from the odder moves, such as those of butts sliding across glass tables. In fact, several of these “odder” moves exist solely for the male gaze, but I shan’t delve into that now.

Overall I would give this song a 3.5/5. For those who have been big fans of SISTAR19 and are approaching this knowing what they are in for, the song and music video would meet all their expectations, and then some. For everyone else though, it’s still worth a listen, if for the fact that it comes across as above par.

Two things though: Try to ignore some of their blatant sexy/fan-service MV moves, and give the song a few more listens — let the hook slowly sink it. This one is likely to be a slow burner.