One Shot: Welcome Back, B.A.P 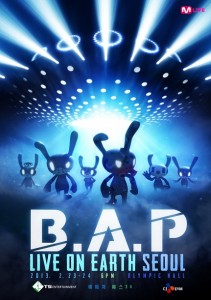 We knew this comeback was coming. B.A.P is notorious for seeming like they’ve never left, though in this case, they actually did. Just a couple weeks before their first solo concert, B.A.P Live on Earth Seoul, the group dropped their second mini-album, One Shot, with a title track of the same name boasting a 7-minute music video utilizing three of the songs on the album. The mini-album contains five tracks total, including the pre-released “Rain Sound.”

One Shot starts off strong with “Punch,” an already aggressive title. The song appears to continue the group’s trend of starting off with a high-energy song and fortunately breaks away from the shortened intro format that they seemed to favor with most releases. Here we have confident B.A.P–you might remember them from “No Mercy“–expressing resistance to what everyone has to throw at them. What is most surprising about this track is the use of Jong-up‘s vocals during his small part, as it’s a style that hasn’t been heard from him yet. Actually, throughout this album, one thing to note would be his changing styles, indicating varied use of what he has to offer. During Zelo‘s rap, the repeated sets of drum beats accompany the rap well, building up the tension to accompany his heavy words.

The aspect I’d criticize in this song, though, is the use of Young-jae‘s vocals. His set seems to be more comfortable in lower pitches, and while it’s great to expand range, his voice sounds strained and weak in some sections of his parts, especially in comparison to Daehyun who seems to be comfortable in the opposite set of pitches, the set that this song thrives on. And speaking of Daehyun, while his extended notes do help the song maintain its excitement, and his lyrics do call for loud screams, cutting back on the frequency would help the song be less noisy while still making the statement of the song. As a whole, the song is more analogous to a grand entrance, an announcement that B.A.P is back.

Title song “One Shot” takes all the intense and hard-hitting sounds of “Warrior” and”Power” and refines them to make a song that is more melodious while keeping in with the more powerful style associated with B.A.P. The song starts with heavy strings setting the mood before a regular beat enters. Yong-guk starts the song with his rap and earns points for relevantly name-dropping Martin Luther King, Jr. but loses some for some confusing English phrases. The instrumental builds before dropping a bit for Him-chan‘s part. Here is his voice put to good use: the gravelly timbre and low pitch mesh well with the music. Following up is Jong-up with his thinner voice and more rhythmic timing. The pre-chorus is split between Dae-hyun and Young-jae, as expected, leading into Yong-guk’s frenzy mimicking the desperate nature of that one shot, one opportunity, and how it needs to be taken advantage of.

The increasingly heavy beat and introduction of electric guitar during Zelo’s part are to die for, only made better by his taunting and motivating message against laziness. Similar taunts fill in much of the lyrics, juxtaposed by encouragement to do better. Daehyun’s portion of the bridge is especially catchy, as are the “woos” that fill parts of the pre-chorus. The instrumental of the song is really well put together, creating a heart-pounding piece that’s thrilling to listen to. The arrangement of vocals is familiar, most similar to that in “Power,” and is a structure that will serve them well for live stages as they’re back to more intense choreography.

“Rain Sound” serves as the ballad on the mini-album, fitting in with the masculine trend already established as well as with the incorporation of strings also in “One Shot.” Highlights of the track are how Jong-up and Him-chan are incorporated as well as Zelo’s initial style of rapping. The moodier and lower pitched style fits the song more, and when Zelo does make the switch into his more aggressive higher pitch, it’s a little surprising as it doesn’t mesh as well. This song exemplifies an excellent overall sound for the group, but it doesn’t really have a direction that it moves towards. At one point the listener is alerted to Daehyun’s upcoming notes by a change in beat, but other than that, it lacks in variation. The song ends with Yongguk’s rap, which is more aggressive than the rap at the beginning, also breaking out from the previously expressed emptiness and sorrow.

Fourth in the lineup is “Coma,” with a surprise, short feature by SECRET‘s Song Ji-eun. The instrumental begins with organ notes before giving way to the now familiar strings that permeate the album. The start builds a familiar pit of tension like in “One Shot.” The debilitating effect of a break-up is really well expressed in the lyrics, ranging from Yongguk and Zelo’s anger to Himchan and Jongup’s confusion, and culminating with Daehyun and Youngjae’s numbness, all with comparison to feeling like they’re in a coma. Yongguk’s second rap precedes Song Ji-eun’s few lines as well as Daehyun and Youngjae’s delicate bridge to the climax. And right before that high point, following Daehyun’s lines, the beeping of a heart monitor goes flat as well as a half step below in tone, prompting a re-energized chorus complete with ad-libs to end the song.

The album ends with rejection of elevation of idols to superior statuses in “0 (Zero).” It is also the song that solidifies B.A.P and TS Entertainment‘s pressing need to find someone who knows English well to check their song lyrics. No, Bang Yong-guk. I don’t know what you mean because I don’t understand it. If you understand “loco get a coco,” please enlighten me because all I got was that a crazy person needs a coconut or some cocoa, and somehow that will bring them back to their senses. Jokes aside, this song does possess some impressive lyrics that outright refuse any sense of superiority sometimes granted to celebrities; Zelo and Yongguk’s individual verses are below.

Anyone dreams to become Superman or Batman,
But you act like you’ve easily become a hero.
This is a stern warning, not a rap, Name Value is what separates you onto sides.
When did this deteriorate like this, idols being princes or princesses.
Every time you fall in your delusions, acting like you’ve become something, I learn from it, I hate you

The most sickening thing to hear is I’m the best.
People that don’t even know how the generation moves.
Foundation and eyeliner.
The television that’s just full of lies.
I feel sick inside to sing an R&B sadly, tears come out, it makes me speechless.
I hate seeing it, the high nose that’s become a Hollywood star,
I’d rather you swear at me about this.

The song sounds like it holds some type of inspirational message from the first listen. But a closer look at the lyrics proves the song to be more honest and forthright than expected. The instrumental brings back the acoustic guitar from “Rain Sound,” but uses it in an entirely different manner as the quicker movement of the song is more pertinent. This song is the most agreeable to the ears. It also ends the album by freely looking forward to the future, providing a rather open-ended finish. 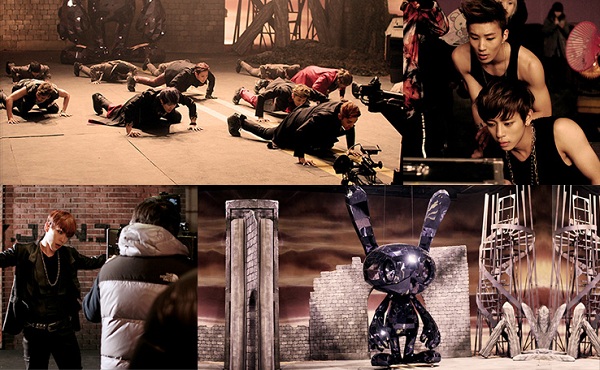 As an album “by B.A.P, from B.A.P, for B.A.P,” this is the strongest and most cohesive work the group has put out yet. In previous releases, they fell prey to a more traditionally idol lineup of songs: strong title song, a song or two similar to the title song that are good but nothing outstanding, and a slow ballad. But here they have actual material, which hopefully foreshadows similarly varied and increasingly individualized releases later in the year–we know they’re coming back, because how could they not with their track record. This album possesses more polish to their sound, admittedly boosted by the dramatic factor and smooth finish of a string ensemble; but it’s also evident in the more adequate use of the weaker vocalists, Him-chan and Jong-up. Oddly enough, the songs still contain an element of rawness despite the increase in sophistication.

What was surprising was the slow progression in rap style by Yong-guk and Zelo. Even as is the two are miles above most idol rappers, but there is such potential to vary their styles and branch out that has yet to be seen. There were hints from both, with Yong-guk’s more guttural rapping in “One Shot” and more spitting style in “0 (Zero)” and Zelo’s little changes in practically every track. The largest change for the two in the previous year came through dialect use in “No Mercy,” so this exploration, however minor, is a welcome change from Yong-guk’s typical verses and Zelo’s LTE rap.

One Shot is put together well and reads as a cohesive unit while still holding variety and interest within each track. There are none of those “filler” tracks here; the mini-album is all business as well as a declaration to set their image and purpose straight. I strongly recommend a look at the lyrics of all songs: all the messages are actually meaningful and/or well-phrased, even the braggart “Punch.”

How’d One Shot pan out for you guys? Is it a hit, or did it miss the target? Leave a comment with your thoughts!