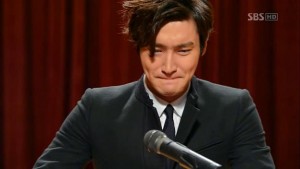 We’re on the home stretch for 2012 as we entered the month of December last week.  And while the K-popiverse readies for all of the end of year festivities what did the last week in K-pop offer us?  The MAMAs took place in Hong Kong and while it pretty much played out that if you showed up you got an award at least we had awesome performances from EXO, SHINee, Epik High, Big Bang, and 2012’s performer of the year PSY, Boom sang of someone “Pretty, ” Wonder Girls‘ leader Sun-ye is getting married, JYJ and SM Entertainment’s legal issues are supposedly over–we’ll see how that goes, BEAST‘s Yoseob goes solo with “Caffeine,” The King of Dramas is getting to be really good, and a little indie band you might of heard sings of a “White Night.”

The following are the 5 Things that happened in K-pop last week that I think are a little bit better than the rest.  If you’re not up-to-date with your K-pop addiction, turn back now, because spoilers will most definitely ensue.

5. Happy Together with Park Hae-jin

Park Hae-jin along with his cast mates from the K-drama My Daughter Seo-young Lee Bo-young, Lee Sang-yoon, and Park Jung-ah joined the cast of Happy Together Season 3 for their latest episode.  It was an entertaining episode, but what I loved about it the most was seeing Park Hae-jin back on TV and showcasing his cooking skills like he did so many times on Family Outing.  What made it so especially touching was to see him doing well after being cleared of charges of draft dodging which put his career and life in chaos for a while back in 2010.  Well, that and his oden kook-soo with dduk looked totally nummy.

Now, if Full House Take 2 had just concentrated more on the love triangle from the beginning I think the story would have been more successful and gotten off to a better start. Tae-ik gets jealous when Man-ok gives Kang-hwi a meal when he comes to visit–even though he just ate earlier.  They then both get scared when Man-ok tells them to behave, or else.  Or things could just be soo much better with the new hairstyles… much, MUCH better.

You know I’ am totally NOT a fan of Orange Caramel, but Joo Won was just too adorable, and Kim Jong-min too, I guess.  It’s the first time that the new season had invited guests, musicians Yoo Hee-yeol, Yoon Jong-shin (what?! first Lee Seung-gi on Running Man and now Yoon Jong-shin on 1N2D my K-variety brain can not compute) and Yoon Sang, and the cast and their guest put on a performance for residents of the island they were visiting near Jindo.  After the concert the cast wound down with a thrilling game of Jenga and ramyun all around.

Now this is a SHINee I can love–no ring dinging dongs, devils, or K-pop Jesus in sight. The PV for SHINee’s latest Japanese release “1000年、ずっとそばにいて・・・” or “1000 Years Always By Your Side” was just released and finally we get a good song and video. It’s a beautiful ballad and the boys sound great in it. The PV is touching as the boys are heaven sent to help a family in their time of need and share in the miracle of a father’s love.

It was part two of Infinity Challenge’s special when they had a bunch of VIP friends  join them–it was basically an ajusshi slumber party.  Check it out as Yoon Jong-shin, Kim Jae-dong, Kim C, Kim Bum-soo and many more join in for some ajusshi games. Another highlight of the nigh was a live performance by KIm Bum-soo of his legendary song “Bogoshipda.”

Those were the 5 Things I LOVED I loved in K-pop last week, were they yours?